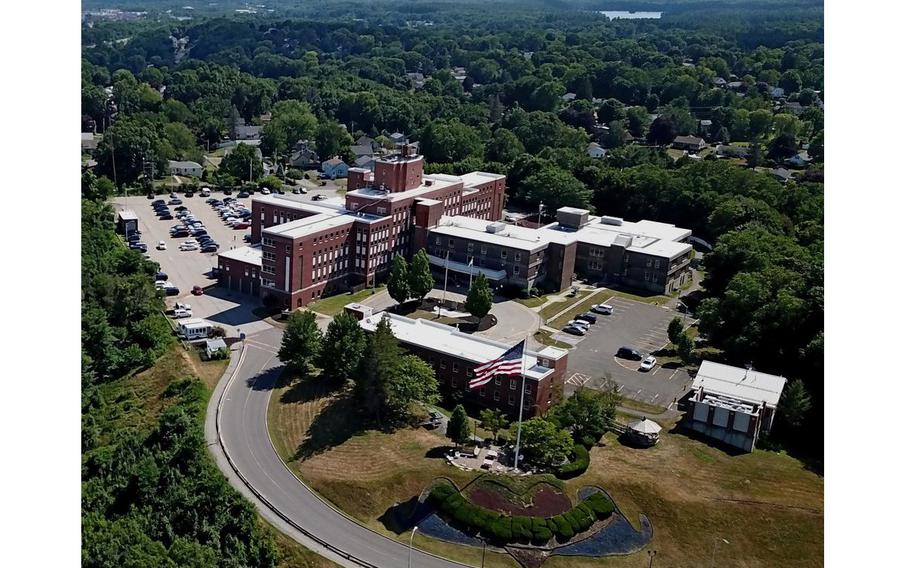 Aerial photo of the Holyoke Soldiers’ Home on July 13, 2022. As the deadline nears for surviving family members and veterans who survived the 2020 COVID-19 outbreak at the Soldiers’ Home in Holyoke to apply for shares of a $56 million settlement with the state, former U.S. Attorney Donald K. Stern is preparing to be the gatekeeper. (Patrick Johnson, The Republican/TNS)

HOLYOKE, Mass. (Tribune News Service) — As the deadline nears for surviving family members and veterans who survived the 2020 COVID-19 outbreak at the Soldiers’ Home in Holyoke to apply for shares of a $56 million settlement with the state, former U.S. Attorney Donald K. Stern is preparing to be the gatekeeper.

Plaintiffs filed a federal class-action lawsuit against state officials and former leaders at the home over a bungled response created by early ignorance of the nature and trajectory of the virus, coupled with mismanagement and government bureaucracy that caused among the most startling death tolls in long-term care facilities in the nation.

Stern served as the state’s top federal prosecutor from 1993 until 2001, when he went into private practice, and now works for Affiliated Monitors. The international firm dispatches independent, third-party monitors to oversee civil settlements across the globe, according to the company’s website.

Stern spent a chunk of his career in the public realm prosecuting mobsters including the late James “Whitey” Bulger, gang leaders, drug lords and white-collar criminals. Now he’s preparing to hear potentially hundreds of stories of suffering from the victims of the COVID-19 outbreak at the state-run facility for aging and infirm war veterans.

The stories will come from both family members of the 84 residents who died of the coronavirus and from veterans who survived the outbreak.

Settlement recipients are split into two classes: those who died before June 23, 2020, and those who died after or survived. The minimum settlement for survivors of the first group will be $400,000 but may climb higher than $500,000. The second group can receive a minimum of $10,000 but up to $400,000, plaintiffs’ attorneys have said.

During a recent interview, Stern said he has already had some contact with families, though the deadline to submit victim impact statements is not until Aug. 16.

“I would say it’s kind of a humbling experience. I see the dilemma, or the task, to try to be fair, evenhanded and dispassionate while having some compassion,” Stern said.

The terms of the settlement have been tentatively set and have received preliminary support from U.S. District Judge Mark G. Mastroianni. The terms were established without Stern’s input, by design. It is now his job to meet with families and decide the discretionary areas.

“All of these things have an element of line-drawing. That’s the nature of what it is,” Stern said, referring to the 9/11 Victim Compensation Fund that dealt with the families of those killed in the Sept. 11, 2001, terror attacks on America. “And if you’re on the other side of the lines — I only call balls and strikes. It sounds heartless to put dollar amounts on lost loved ones or suffering, but that’s the legal system we have.”

Stern noted that the settlement reached in May also set relatively standard criteria to determine payouts beyond the chronological milestones set by the agreement: the veterans’ ages, suffering, earnings and the frequency of contact survivors had with their loved ones, for instance.

Lead plaintiffs’ attorney Michael Aleo, of Northampton, said his team has been having fairly good success at contacting those they believe might be class members, if the potential members have not already been in touch.

“That’s not been as difficult as we feared,” Aleo said.

The stickier prospect has been meeting the settlement’s requirement that a probate court appoint a special representative to file the claim. Aleo said previously having been appointed a trustee or executor of a will does not satisfy the terms.

“My sense is the probate courts have been trying to be helpful. That process can take months and we don’t have months,” Aleo said.

Just recovering from a tough bout with COVID-19 herself, Laurie Mandeville Beaudette is in the midst of tackling the relative mountain of paperwork required to apply as a class member. Her father, U.S. Navy veteran James Mandeville, died on April 14, 2020, at Holyoke Medical Center after contracting the virus at the soldiers’ home.

Her father was one of roughly three dozen residents who initially tested negative for the virus at the soldiers’ home and were transferred to the “COVID unit” at the nearby hospital. Mandeville developed symptoms within days of that transfer, as did many others.

While considering the paperwork, Beaudette finds herself reliving “the horror show of 2020″ for her father and others like him, plus their loved ones. She made the move of rescinding a “do not resuscitate” order previously on file at the home while her father was in the hospital, and she was prevented from seeing him.

“A doctor from the medical center called me and said, ‘What do you want?’” Beaudette recalled. “I told him, what I want is for you to not let my father die until I can see him.”

And that she did, for 30 minutes on Easter Sunday that year, forced to shed her clothes and don full protective gear to visit the unit.

“I went on the unit, and it was really, really scary to see him there,” she said. “I often try to see thing from others’ perspectives, and I thought: How does this look to my dad? They must look like astronauts to him in full protective headgear, and it’s very impersonal. Not what you’d want to see at the end of your life.”

Although largely unconscious that day, her father did sit up momentarily the last time she saw him alive, exclaiming: “Oh! It’s you!” with a grin.

She got the call that her father died two days later. Immersing herself back in that time makes her sad, and mad, Beaudette said. But it’s necessary.

Stern said there is a dedicated website and telephone line for potential class members to call to inquire about the process. The phone number is 617-807-1128 and the website is holyokesoldiershomefund.com.