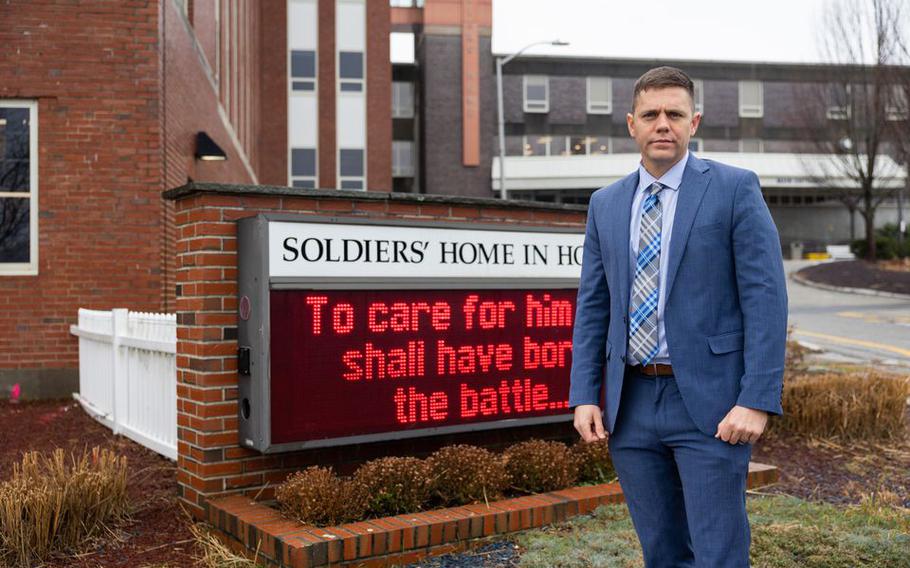 HOLYOKE, Mass. (Tribune News Service) — Nearly two years ago, Maj. Gen. Gary W. Keefe was met by the imploring eyes of staff at the Soldiers’ Home in Holyoke, which was steeped in crisis at the start of the pandemic.

“What I remember most was the panic in their eyes,” said Keefe, senior officer of the Massachusetts National Guard, who was dispatched to the site as the virus began galloping through the state-run home for elderly veterans.

But soon, he saw a team galvanize to try to stabilize the home, whose staff also began to fall ill and call in sick in droves. By June of 2020, nearly 80 veterans had died, many alone as families were barred from the facility.

In addition to the human casualties, the crisis upended the soldiers’ home leadership. Keefe became chairman of its board of trustees. Former superintendent Bennett Walsh, medical director Dr. David Clinton and other top staff were forced to resign.

Walsh and Clinton were indicted for criminal neglect earlier this year, but a Hampden Superior Court judge recently dismissed the case. State Attorney General Maura Healey has since signaled her intent to appeal the ruling.

If there was a silver lining, it was the Legislature and Gov. Charlie Baker moving swiftly on reforms at the home focused on staffing, leadership and improving the outdated physical structure of the building, which was faulted, in part, for the scale of the outbreak. State laws around the chain of command for the home and its counterpart in Chelsea are also in question.

“I see a groundbreaking in the future at some point (next) year,” Keefe said, referring to the symbolic start of construction of a new $400 million home with primarily private rooms to replace the cramped triple suites, as well as modernized common spaces. “I really can’t wait until we can open the doors and let people in to see the good things that are happening here now.”

If all goes according to plan, the new facility will be built on Cherry Street next to the existing home. It is slated for completion in 2026.

After Walsh’s ouster, the state temporarily called in Val Liptak, CEO of the state-run Western Massachusetts Hospital in Westfield, to run the Holyoke site. She returned to her original post a year ago. As trustees look for a permanent superintendent, the state appointed the National Guard’s Col. Michael Lazo, whom Keefe says has repaired relations with labor unions and families, and has generally helped to right the ship.

While the board went through a lengthy exercise earlier this year to find a permanent superintendent — complete with an outside executive recruitment agency and a subcommittee — the pick went south. Rick Holloway, a veterans’ home administrator from Idaho, was the resounding pick by trustees, but then reconsidered after he accepted the job.

Keefe said trustees will begin the process over again, but are not in a hurry to get rid of Lazo, who is pursuing his certified nursing home administrator’s certification.

In addition to greenlighting the money for the new soldiers’ home in Holyoke, Baker also approved $200 million in a bond bill for expanded veterans’ services across the state. A legislative oversight committee held several public hearings and probed factors that may have exacerbated the outbreak at the home.

An independent report commissioned by Baker and conducted by Boston attorney Mark Pearlstein yielded a report that laid much of the blame on Walsh and his team. In particular, the report found a decision to combine two dementia units, blending sick veterans with well veterans, was a “catastrophic” decision that ramped up the spread of the virus rather than blunting it.

Two civil lawsuits have been filed by veterans and their families in U.S. District Court along with one by staff. Those complaints are all pending.

On the legislative side, bills focused on the governance in the House and Senate have been making their way through committee and were recently voted out favorably by members of the Joint Committee on Veterans and Federal Affairs. Those virtually identical bills have been culled down to one.

State Sen. John Velis, a Democrat from Westfield whose district includes Holyoke, has been at the forefront of advocating for the soldiers’ home since the crisis began. A U.S. Army reservist, he immersed himself in “listening sessions” with desperate, grieving family members and has helped usher the bills through the branches. He also is the chairman of the veterans affairs panel.

He reserved his right to vote on the bill.

“As of right now I can’t get behind the bill that has emerged from the Senate but I’m hopeful we’ll get to the point where we have something that is good for all veterans,” Velis said.

One facet of the bill he takes issue with is a recommendation to abolish the separate boards of trustees for Holyoke and Chelsea in favor of a new, statewide advisory council that would have authority over both sites.

“These are two fundamentally different homes,” Velis said. “Holyoke is basically a nursing home, while the population at Chelsea is diametrically different.”

Chelsea tends to provide housing for veterans at risk of homelessness who need other types of assistance, he said.

“There are policies that might be good for one and not for the other,” he added.

“We spent an inordinate amount of time talking about the medical pedigrees of the people running the homes, but this proposal takes the medical folks out of it. It feels counterintuitive to me,” Velis said.

He anticipates votes on the bill in the full House and Senate sometime this spring.