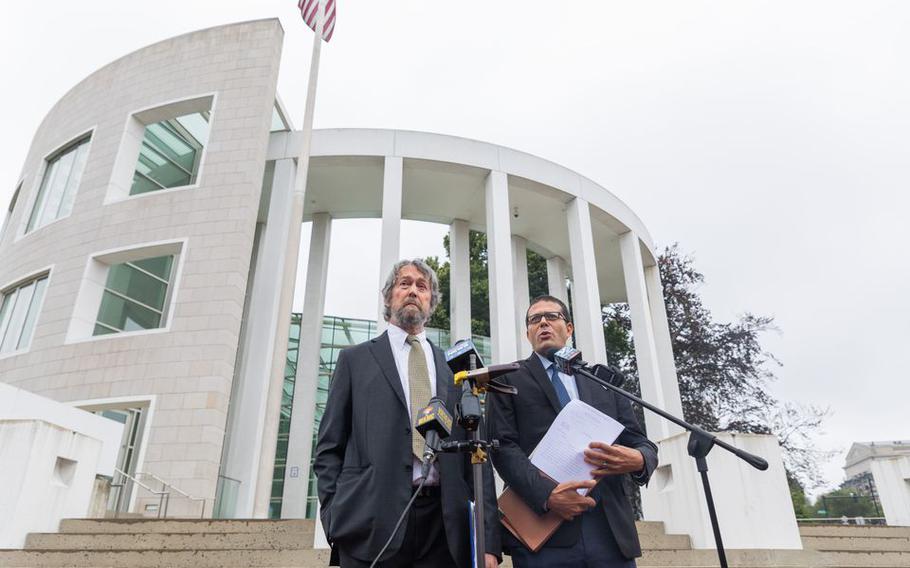 Attorneys Thomas Lesser, left, and Michael Aleo announce the filing of a class action lawsuit in U.S. District Court over deaths tied to a COVID-19 outbreak at the Holyoke Soldiers’ Home, July 17, 2020. (Leon Nguyen, The Republican/TNS)

(Tribune News Service) — A lawsuit against officials who run the Holyoke Soldiers’ Home, filed on behalf of veterans who died of COVID-19, has been expanded to include Massachusetts Health and Human Services secretary Marylou Sudders.

The amended complaint, filed with U.S. District Court in Springfield on Monday, charges that Sudders, as the head of the state agency that oversees the Soldiers’ Home, failed to provide administrative oversight during the outbreak and in the weeks leading up to it.

“The crisis at the Soldiers’ Home would have been averted if Secretary Sudders ... had not acted with deliberate indifference and substantially department from accepted professional norms,” according to the complaint.

The suit was filed in July 2020 by the estate of Paul Sniadach, an 84-year-old Korean War veteran who died in April 2020. The suit was filed as a class action lawsuit filed on behalf of all veterans at the facility who died in the outbreak in March and April of last year. In all 76 veterans died, 84 others and 80 staff members fell ill as the coronavirus swept through the facility.

The suit has since been amended to include 16 other plaintiffs, including the estates of 15 deceased veterans.

“The evidence shows that Secretary Sudders failed in her obligation to protect the veterans at the Soldiers’ Home from serious harm,” said attorneys Thomas Lesser and Michael Aleo in a prepared statement. “Secretary Sudders’ actions and inactions were a cause of COVID-19 spreading throughout the facility, causing needless deaths and pain and suffering.”

Health and Human Services declined to comment on pending litigation.

Walsh, a Marine veteran with no previous health administration experience, was hired as superintendent in 2016. He was fired by Gov. Charlie Baker in June 2020, but the dismissal was later found by the courts to be unlawful. He resigned in October.

He is facing criminal charges on multiple counts of caretaker abuse on an elderly person. His attorneys are seeking to have the charges dismissed.

The amended complaint charges that Sudders was responsible for oversight of Walsh and Urena, that it was known the Walsh had little experience in health administration, and at the start of the outbreak they failed to provide oversight.