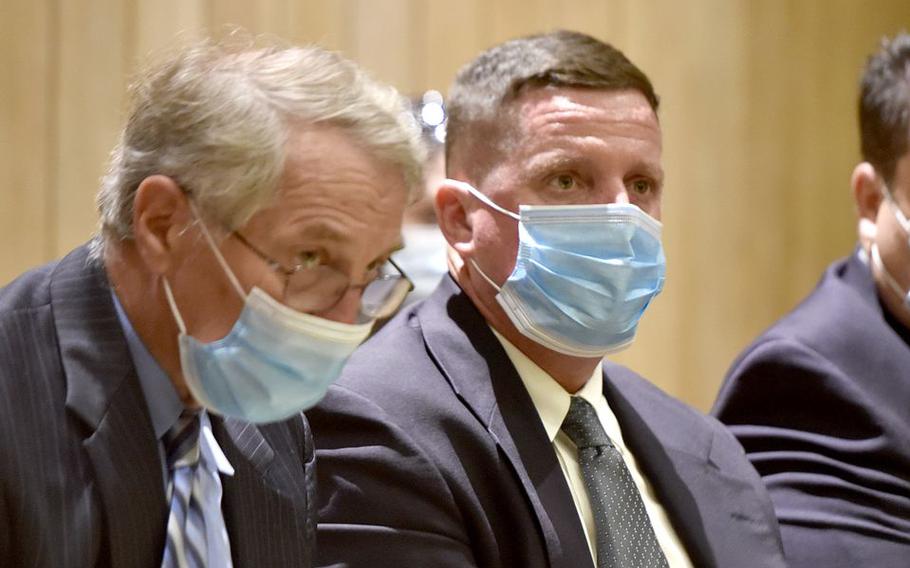 Former superintendent of the Soldiers' Home in Holyoke, Mass., Bennett Walsh (right), listens to testimony while sitting next to his attorney, William Bennett. This was a hearing in Hampden Superior Court to consider a motion to dismiss criminal charges against Walsh and former medical director, Dr. David Clinton in the criminal case brought against them by Attorney General Maura Healey, August 24, 2021. (Don Treeger, The Republican/TNS)

SPRINGFIELD, Mass. (Tribune News Service) — Attorneys for Bennett Walsh, former superintendent of the Holyoke Soldiers’ Home, and Dr. David Clinton, the facility’s former medical director, argued that the charges against them in connection with resident deaths during a COVID-19 outbreak should be dropped because neither man was directly responsible for day-to-day, hands-on treatment of patients.

In a day-long hearing Tuesday in Hampden Superior Court, Walsh’s lawyers Michael Jennings and William Bennett, and Clinton’s attorney, Jeffery Pyle, each argued that the attorney general’s case against them is fatally flawed on multiple levels, and all the charges should be dismissed.

Judge Edward J. McDonough will take the matter under advisement.

Parties are due back in court for a status hearing on Oct. 28. McDonough gave no indication if he will issue a ruling at that time or before.

Walsh and Clinton were charged by the state Attorney General’s Office 11 months ago with five counts each of two different charges: being a caretaker who wantonly or recklessly commits or permits bodily injury to an elderly or disabled person, and being a caretaker who commits or permits abuse, neglect or mistreatment of an elderly or disabled person.

The charges stem from Attorney General Maura Healey’s investigation into the Soldiers’ Home following the COVID outbreak in March and April of 2020.

At the peak of the incident, the National Guard was called in to assist, and many residents were transferred to Holyoke Medical Center. Walsh, 50, a Marine veteran with no previous health administration experience, was fired in June by Gov. Charlie Baker, but the dismissal was later ruled by the courts to be unlawful. He officially resigned the post in October.

The charges against them were came following indictment by a statewide grand jury.

The state’s investigation focused on the decision by Soldiers’ Home leaders to consolidate two dementia units into one on March 27, just before the death toll began to climb.

Assistant Attorney General Kevin Lownds said Tuesday that the decision to merge the two units proved to be “catastrophic.”

Jennings and Pyle each argued that the state’s charges and the grand jury indictment were flawed.

Massachusetts law regarding caretaker abuse specifically identifies a caretaker as someone who has primary and substantial day-to-day care of someone who is elderly or disabled. An example would be a family member, a floor nurse or even a doctor.

Walsh, as superintendent, was involved in the day-to-day administration of the facility, not patient care. Clinton as medical director would set general policy and the medical staff would administer direct care.

“Every prosecution of this is clear that it involves a family member or a direct care worker, not the administrators of the facility,” Jennings said.

Our position is that if everyone is ‘primary’, then no one is ‘primary,’ said Pyle. “The legislature had something in mind when they used that word.”

Jennings said it was not their position that the blame for the death should be on the doctors and nurses at the facility instead of Walsh and Clinton. “The blame belongs with the virus.”

Judge McDonough asked Lownds if he was aware of another case where the administration of a medical facility was charged with neglect under the state law. Lownds replied he was not.

“This would be the first?” McDonough said.

He said the Attorney General’s Office position is that the decisions made by the Soldiers’ Home administration to combine wards at the start of a pandemic, when no one was really sure who has exposed and who wasn’t, led to a catastrophic result.

“It would not be a stretch to hold them accountable for their decision,” Lownds said.

Jennings and Pyle also said the charges should be dismissed because prosecutors cannot show evidence that any of the veterans exposed to COVID-19 at the facility suffered from neglect or mistreatment.

Bennett, the former Hampden County district attorney and Walsh’s uncle, argued the charges do not hold up because prosecutors cannot demonstrate the decision to combine different units was wanton or reckless.

Wantonness, under the law, is defined as “an indifference to, or disregard of consequences to others,” he said.

The decision to consolidate units was in response to a critical staffing shortage, and a desire limit exposure in the facility by keeping people known showing symptoms of COVID-19 away from people who were stricken with the virus.

“This was not an act of indifference,” Bennett said. “It was an intention to provide as much care as possible.”

He also said that at the first sign of the virus entering the facility, Walsh had reported to the state Department of Health and Human Services for assistance and asked for the National Guard to be deployed to the facility.

Assistant Attorney General Philip M. Schreiber argued that it is possible for someone to “be reckless even though they thought they were careful.”

He said that even though the Soldiers’ Home sought to consolidate units and keep the symptomatic from the asymptomatic, there was no policy in place to limit contact between the groups. In particular, there was nothing in place to stop dementia patients, who are prone to wandering, from going from room to room and being exposed.

McDonough asked what they could have done differently considering dementia patients are not to be restrained or locked in rooms.

Schreiber said they could have had staff available to “redirect” those patients away from areas where they could be exposed.

In response to Walsh’s calls for the National Guard, Schreiber said they came after the situation at the Soldiers’ Home spiraled out of control, and should have come much sooner.

“Mobilization of the National Guard takes time. It doesn’t happen in five minutes,” he said. Walsh, a decorated military officer prior to his selection as superintendent, “should have known that,” he said.

Seated in the back of courtroom were several family members of deceased veterans.

Laurie Mandeville Beaudette, daughter of the late James Mandeville, said she was infuriated by the move to dismiss.

For the defense to claim they were not primary caregivers, she said, “They were captains of the ship and they let the ship sink.”

She said her father had dementia and would not eat unless someone was there to prompt him. With the Soldiers’ Home staffing short and chaotic, trays of food would be put in front of him but not one was there to encourage him to eat, she said.

“I hope they hold them accountable. I hope the commonwealth prevails,” she said.