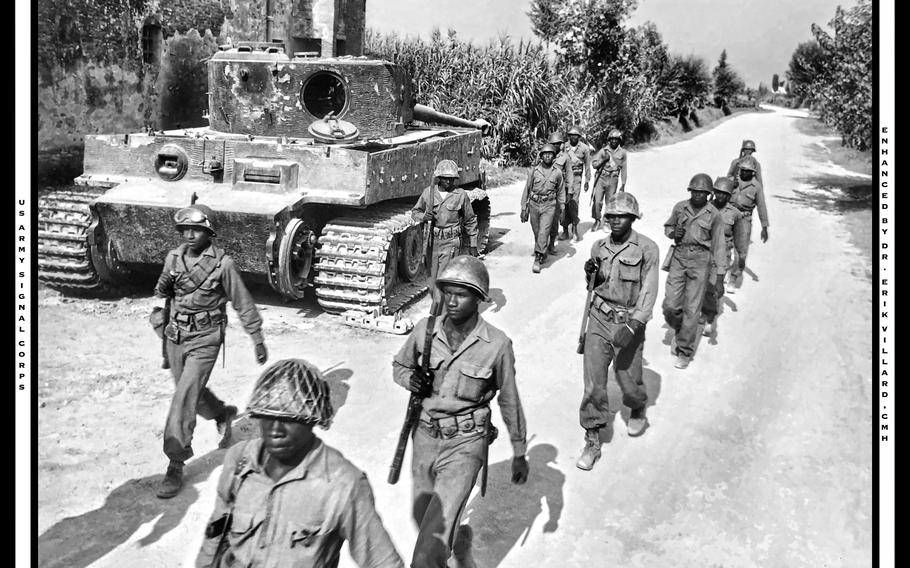 Troops from the 92nd Infantry Division move past a destroyed Mark IV tank on the outskirts of Ponsacco, Italy, on Sept. 1, 1944. (U.S. Army)

Maceo A. Walker was 20 when he was killed in the battle of the Cinquale Canal, a little remembered, four-day struggle between men of the segregated African American 92nd Division and German forces in northern Italy during World War II.

It was a bloody battle, fought in the rain and mud as enemy artillery pounded the Americans crossing the waterway in 1945. Walker, a native of Baltimore and the only child of a butler and his wife, was lost in the chaos. His body was never found.

Seventy five years later, Army genealogists, seeking to put names to unidentified remains of some of the dozens of men killed in the battle, could find only two living relatives of Walker’s who might provide DNA for family comparison.

One, a second cousin, was a man in New York City named Shelton Lee, who went by the nickname, Spike. The other was Lee’s brother, David.

While experts later determined that DNA from the famous filmmaker and his brother could not be used for comparisons because they were on another branch of the family tree, the Pentagon gained a high-profile ally in its effort to help Black families who may have relatives missing in World War II.

Earlier this year, Spike Lee made a public service video announcement for the Defense POW/MIA Accounting Agency (DPAA), urging people who think they might have a relative who went missing in the war to contact the agency.

“It’s not just my cousin,” Lee said in an interview at the time, “but all those brothers in the 92nd division. Buffalo soldiers, who fought for this country, who believe in this country, and came home to the United States and were still not full class citizens.”

On June 21, experts working on a project to identify lost men of the famous Black division, exhumed from a cemetery in Italy two bodies of soldiers from the 92nd killed in the fighting there.

One set of remains, designated X-124 was initially recovered near the Cinquale Canal after the battle, and experts wondered if it could be Lee’s second cousin, officials said.

The bodies were exhumed from the Florence American Cemetery, where almost 4,400 U.S. servicemen and women who perished during World War II’s Italian campaign are buried. They will be flown to a government laboratory in Nebraska for analysis.

The work is part of an effort by the DPAA to account for 53 men of the much maligned 92nd division who were listed as missing in action during World War II. The agency has already accounted for hundreds of service members missing from the war.

“They were essentially fighting a war on two fronts,” said Sarah A. Barksdale, a DPAA historian working on the project: One on the battlefield, and one in the segregated Army and segregated America.

The project “is not going to make up for the treatment they received,” she said. “But I think it’s really important to make sure that they’re part of our country’s memory of World War II.”

So far, only three from the division have been identified. And the DPAA says it has been hampered, in part, by the difficulty in locating living relatives willing to provide their DNA for comparison with the DNA from unidentified remains.

Even when relatives are found, African Americans can be suspicious of government intentions and wary of providing DNA, officials said.

The government has a history of unethical medical treatment of Black Americans, most notably during the notorious Tuskegee experiment of the mid 1900s, in which infected participants in a syphilis study were not told a treatment for the disease had been found.

Lee’s 2008 movie, Miracle at St. Anna, based on author James McBride’s 2003 novel of the same name, tells a story of soldiers from the 92nd Division.

Although the film was partly shot on location in Italy where the 92nd fought, neither Lee nor McBride then knew of Lee’s family connection to the division and the Italian campaign.

McBride said in an interview: “The 92nd was — should be — the most fabled Black unit in World War II. It’s been overlooked by historians for years.”

In the segregated army of World War II, the 92nd Division was called the Buffalo division, a moniker initially given to Black American soldiers who served in the western U.S. in the late 1800s.

The 92nd Division was mostly made up of Black American soldiers and White officers. It was poorly trained, poorly led, and largely unready when it was thrown into the fighting in Italy in 1944 and ‘45, historians have said.

The U.S. and its allies there were trying to dislodge strong Nazi forces in the mountainous landscape of northern Italy.

In February 1945, Walker’s 366th regiment and other elements of the 92d fought a bitter standoff with the Germans around the canal, after which they were withdrawn, amid bitter criticism from the Army brass.

Lt. Gen. Lucian K. Truscott Jr., said: “The infantry of this division lacks the emotional and mental stability necessary for combat,” according to Hondon B. Hargrove’s 1985 book, “Buffalo Soldiers in Italy.”

But 700 men from the division gave their lives in Italy, the DPAA says, and thousands more were wounded. Almost half of the fifty men still unaccounted for are from Walker’s battered 366th regiment.

Two men from the division, Lt. Vernon J. Baker and Lt. John R. Fox, were given the Medal of Honor, the nation’s highest award for valor. Fox was killed in action.

They and five others from different outfits were belatedly given the honor in 1997 by President Bill Clinton. They were the first Black veterans of World War II to be given the nation’s highest award for valor — fifty two years after the war ended.

Walker, a private first class in Co. I of the 366th, was killed February 10, 1945, according to the DPAA. The circumstances of his death are not known.

Walker was born in Baltimore, according to government records. His father, Lewis or Louis, was from Mt. Victoria, a tiny crossroads community fifty miles south of Washington in rural Charles County, Md.

When World War II broke out, Walker was living with his father and mother, Patricia, in an apartment on Winthrop avenue in New Rochelle, N.Y., according to Census records. His mother reported that she was a part time maid in a private home.

The family lived in an African American neighborhood where many people worked as maids, butlers, chauffeurs, laundresses and cooks, according to the Census.

Lewis Walker was listed as a chauffeur and butler for the wealthy clothing manufacturer David Crystal and his wife, Ida, sometimes in New Rochelle and sometimes in Hollywood, Fla., where the Crystals also had a home.

Maceo Walker was 18 when he registered for the draft the day after Christmas, 1942. He was active with the Winthrop avenue branch of the Boys Club of New Rochelle, and attended the Catholic Church of the Holy Family, according to a news article after his death.

He had a first cousin, Jacqueline Shelton Lee, who would become Spike Lee’s mother, according to Laurie A. Jones, an Army casualty specialist who is overseeing the historical research on the Walker case.

Walker enlisted in the Army on July 20, 1943, and was sent overseas in November 1944, according to records and the newspaper story.

The 366th regiment had mainly done guard duty at air bases before being sent to Livorno, on Italy’s northwest coast about 35 miles south of the Cinquale Canal, on Nov. 26, Hargrove wrote.

There, it was “expecting to have three months of intensive training before entering combat,” he wrote.

Instead, four days later, its companies were entering action, he wrote.

As the Americas struggled across the waterway, they were pummeled by enemy artillery, including guns taken from a warship and hidden in a tunnel in the mountains, Hargove wrote.

“The sound of gunfire ... never ceased,” recalled Lt. Dennette Harrod, of the 366th regiment. “The sound and the sight of the heavy shells falling and exploding among us was terrifying, but we stayed there until ordered back.”

Groups of men were killed by single artillery shells, and the water in the canal was tinged red with blood, one officer remembered.

“I don’t know how we did it, but we kept moving up, through all that shelling and mortar and machine gun fire, losing killed and wounded every step of the way,” Lt. Harrod remembered.

The second day of the battle, it rained heavily. The Americans fought their way north of the canal and began moving inland. On Feb. 10, Walker’s Co. I attacked and was hammered by enemy artillery fire and counter attacks, Hargrove wrote.

Walker was killed that day, exactly where and how are uncertain. That night it rained again. The next day the Americans were ordered to retreat south of the canal.

Five days earlier, Walker had written to his mother, according to a newspaper article announcing his death. She would not get the letter until Feb. 17, probably unaware he had been killed.

Walker’s parents were told of his death in March 1945.

The body identified as X-124 was found by an Army graves registration team in April, 1945, north of the Cinquale Canal, Barksdale, the DPAA historian, said earlier this month.

It was in an isolated spot and the body may have been buried by the enemy, she said. According to military records posted on the internet, the body was missing its arms, chest and head, perhaps the result of a powerful artillery blast.

Present were the legs, except for the left thigh bone and both kneecaps. The feet, pelvis and lower spine were there. There were also a pair of wool pants and wool underwear with the remains. But there was no identification.

If the remains cannot immediately be linked to Walker, the DPAA said it has DNA from ten other candidate families it can try for comparison.

“Discovering the remains of these soldiers and trying to find out where their families are is part of our duty as a nation,” McBride, the author, said. “These were brave men.”