The remains of Seaman First Class Wilbur F. Newton, who was killed December 7, 1941, while stationed on the USS Oklahoma at Pearl Harbor, were returned to Missouri aboard a flight Tuesday afternoon at KCI. Family members gathered as rain and heavy winds blew across the tarmac. (Rich Sugg, The Kansas City Star/TNS)

(Tribune News Service) — Eighty-one years after he was killed in the attack on Pearl Harbor, Seaman 1st Class Wilbur F. Newton’s remains returned to his hometown in Missouri.

Members of Newton’s family felt relieved and finally at peace when his remains, identified through DNA testing, arrived at Kansas City International Airport on Tuesday to a Navy guard and water salute from two fire trucks.

“It is very moving for the family,” said Jane Perkins, the daughter of Newton’s first cousin. “We’ve hoped, we’ve always wondered, but nobody really knew before now.”

Newton died Dec. 7, 1941, in the attack on Pearl Harbor while stationed aboard the USS Oklahoma, according to his obituary. His remains had been interred in Hawaii along with other unidentified servicemen since 1941.

The Defense POW/MIA Accounting Agency used dental and anthropological analysis to identify Newton after his maternal first cousin and her two sons gave the Navy samples of their DNA in 2012. Newton was accounted for on Oct. 21, 2021 — nearly 80 years after his death.

Robin Deeds, the son of Newton’s oldest living relative, said that while he knew his father had a first cousin who died at Pearl Harbor, he didn’t know Newton’s name until his father learned that his remains were identified.

“After eighty years, you give up after a certain amount of time,” Deeds said. “I want to thank his cousins that gave the DNA because if it hadn’t been for for those three, we wouldn’t be here today.” 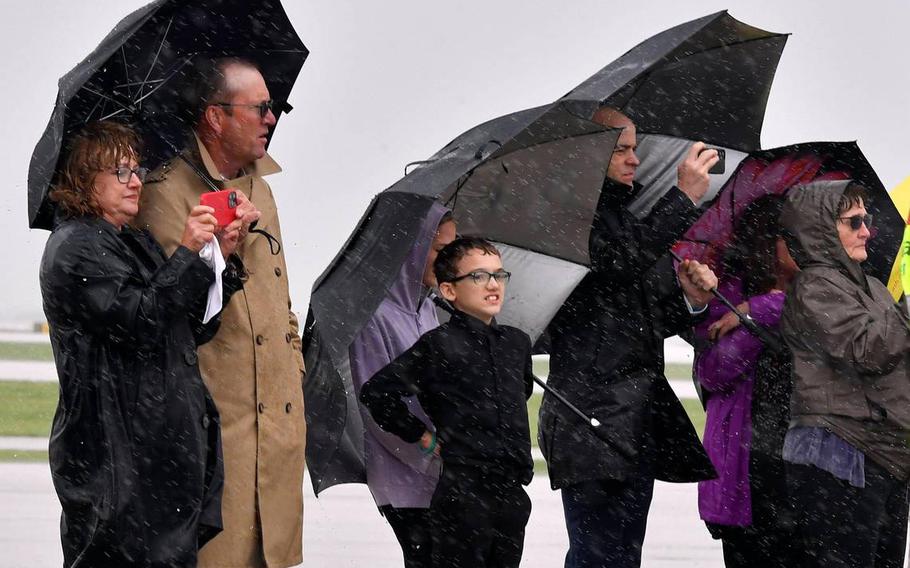 Family members look on as the remains of Seaman 1st Class Wilbur F. Newton, who was killed December 7, 1941, while stationed on the USS Oklahoma at Pearl Harbor, were returned to Missouri aboard a flight Tuesday afternoon at KCI. (Rich Sugg, The Kansas City Star/TNS)

Newton will be buried in his family plot in Mound City, Mo., which also holds the remains of his parents and two of his three sisters.

“When we found that marker, we knew we had found where he belongs,” Perkins said.

According to his obit, Newton joined the U.S. Navy in May 1940 for a six-year enlistment after previously joining the Civilian Conservation Corp in Leavenworth and working for The Works Progress Administration in San Francisco.

During the attack on Pearl Harbor, Newton’s ship sustained multiple torpedo hits, causing it to capsize. Newton and 428 of his fellow crewmen died — few survived. Newton was 29 years old when he died.

The American Graves Registration Service disinterred the remains from the U.S.S. Oklahoma in 1947, but were only able to identify 35 of the men at the time, according to the DPAA.

The unidentified remains were buried at the National Memorial Cemetery of the Pacific in Honolulu. They stayed there for 68 years before the DPAA exhumed the unknown remains for testing in 2015.

For his service, Newton received the American Defense Service Medal, a Purple Heart, and the Gold Star pin, among other honors. 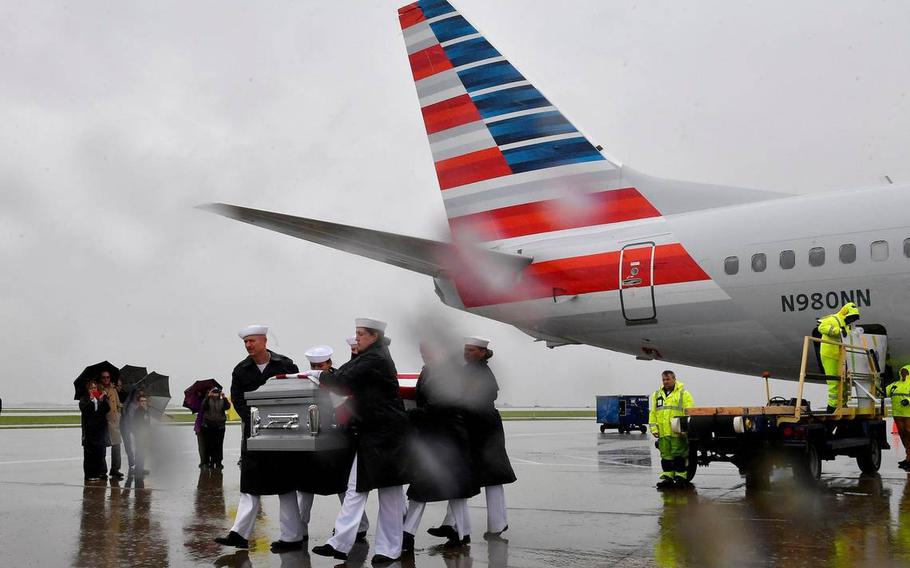 The remains of Seaman 1st Class Wilbur F. Newton are returned to Missouri. A U.S. Navy Reserve Honor Guard carried Newton’s remains to a hearse, which was then escorted to his hometown of Mound City, where he will be buried. (Rich Sugg, The Kansas City Star/TNS)

Navy sailors Julie Mota Herrera and Elizabeth Gronau-Young, both second class petty officers, said they were honored to take part in the ceremony on Tuesday.

“You could be in the Navy all your life and this is definitely the most honorable thing,” Gronau-Young said. “Especially in our day and age where we don’t really see war time, this is something we get to do, to honor who we’ve lost.”

A service for Newton will be held at United Methodist Church in Mound City at 10 a.m. May 28 followed by a military ceremony at Mount Hope Cemetery. Pettijohn & Crawford Funeral Home will be open for the community to pay their respects from 9 a.m. to 5 p.m. on May 26 and 27.