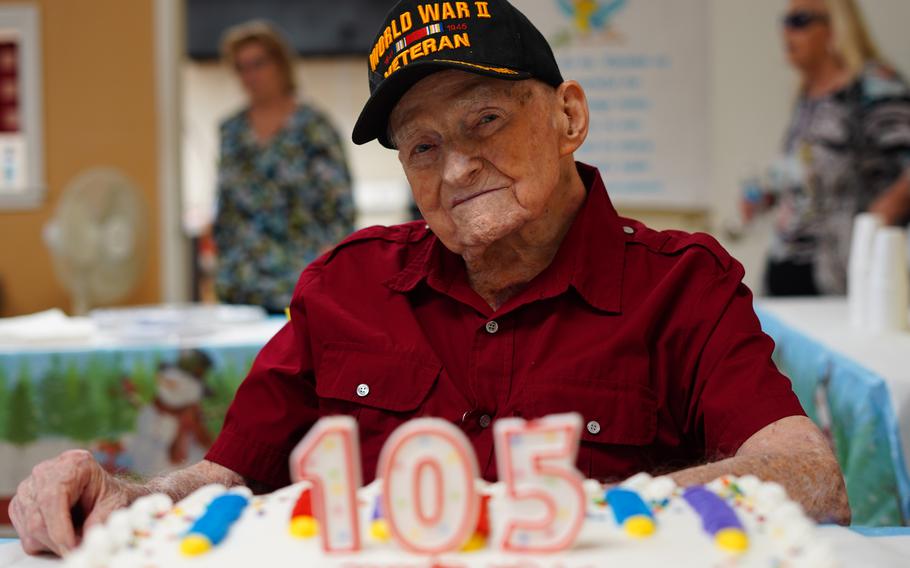 Navy World War II veteran Bill Monfort, who turned 105 on Dec. 17, 2021, celebrates with members of his church on Dec. 19, 2021 in Tampa, Fla. Monfort lived through the attack on Pearl Harbor and fighting in the Pacific during WWII as a member of the Navy. He recently survived a COVID-19 infection as well (during the summer of 2020, before vaccines were available). (Luis Santana, Tampa Bay Times/TNS)

(Tribune News Service) — After Bill Monfort turned 100, the cakes began to pile up.

With each annual checkup, his doctor’s office made him one. So did his church. Friends and family baked.

“One year, I got nine cakes,” the longtime Tampa resident recalled.

On Dec. 17, Monfort celebrated his 105th birthday. He’s survived COVID-19, kamikaze attacks and the assault on Pearl Harbor over the course of his life.

He and Forrest Gump could compare notes.

Monfort learned to drive on a Model T. He remembers getting the polio vaccine — the tasteless, odorless inoculation dropped into a sugar cube and administered right to his tongue. “It wasn’t not like people are with COVID now,” he said. “People took it matter-of-fact, as something they needed to do. And they had no problem.”

He once invited Dick Cheney, vice president at the time, to a party for Navy veterans just outside D.C. Cheney came.

It was the second time there’d been an attack on U.S. soil in modern-day history. The first time, Monfort was out at sea, 800 miles off the coast of Honolulu.

A radio operator on the destroyer ship, he was one of the first to hear the chilling message: “Air raid Pearl Harbor. This is no drill.”

It’s easier for Monfort to tell you what Pacific battles he didn’t fight the ensuing world war campaign. He only missed three: Saipan, Tinian and Iwo Jima.

He can talk for hours about his time in the war.

“He’s one of the most interesting people I’ve ever met,” said Don Alexander, his son-in-law.

“That hat has gotten me a lot of free meals,” he said with a twinkle in his eye.

After World War II ended was signed, Monfort returned to the United States.

He would go on to help revolutionize care for people with developmental disabilities in Tampa Bay.

It was the 1960s. He and his wife, Bessie, were driving over two hours to see their first daughter Rossie, who had development disabilities. At the time, the nearest state institution for children like her was in Ft. Meyers.

Monfort, along with other Hillsborough County families, decided to found a local organization where people with disabilities could live in a home-like setting. Today, the charity, Angels Unaware, boasts eight campuses and is the longest-running group home in Tampa Bay.

For his work, the Tampa Bay Lightning honored Monfort as the “Lightning Community Hero” of the 2016 -2017 season. The accompanying $50,000 prize went right back to his group homes.

At 103, Monfort contracted COVID-19. He was living alone, his wife having died years earlier.

It was July 2020, and vaccines were not yet available. He spent three weeks in the hospital. He recovered, and after spending time in a rehabilitation center, decided to move into an assisted living home.

“If I went back to my apartment in Tampa, I could live a lot cheaper than here,” Monfort said. “But at my age, it probably wouldn’t be long before I’d be needing some help in the home. Here, they’ve got everything.”

As he enters his 105th year, Bill Monfort is content.

He isn’t sure there’s anything particular he’d like people to know about his life. As one of the last surviving veterans of World War II, he just wants people to remember the conflict.

“Just that it happened,” he said. “We were there.”