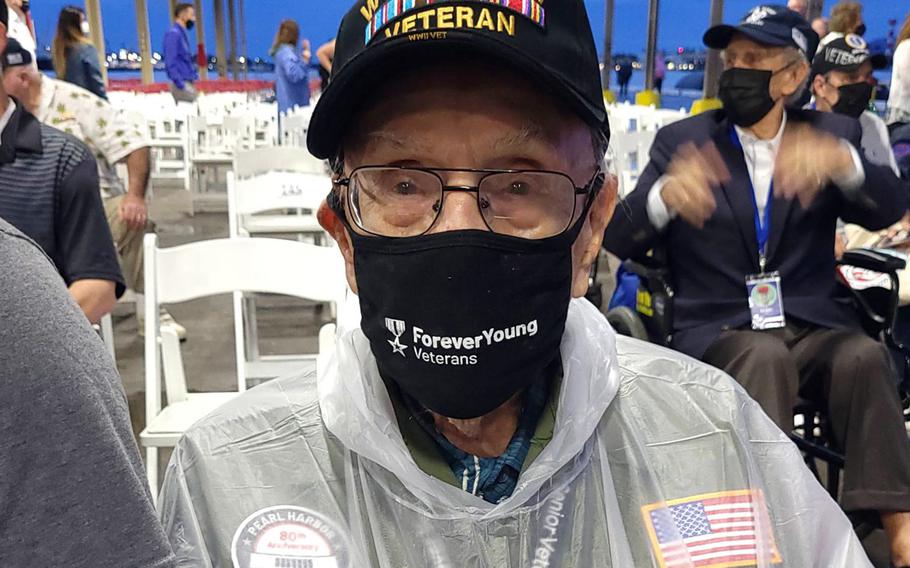 Buy Photo
Richard Schimmel, 99, who was stationed at Fort Shafter, Hawaii, on Dec. 7, 1941, awaits the start of a ceremony at Joint Base Pearl Harbor-Hickam, Tuesday, Dec. 7, 2021, marking the 80th anniversary of the surprise attack. (Wyatt Olson/Stars and Stripes)

JOINT BASE PEARL HARBOR-HICKAM, Hawaii — Richard Schimmel was a 19-year-old Army corporal at Fort Shafter on the morning of Dec 7, 1941, when he became one of the first to learn that a fleet of Japanese planes was flying toward Oahu.

Schimmel was assigned to the Aircraft Warning Service at Fort Shafter, which is uphill from and a few miles east of Pearl Harbor. As a plotter and switchboard operator, he was in contact with the radar operators in the north part of Oahu.

Another soldier in his unit rousted him from bed that Sunday morning to tell him about radar picking up incoming planes, which were mistakenly taken to be American bombers flying in from the West Coast.

“I was the fifth person to know they were coming,” Schimmel, now 99, said from his wheelchair Tuesday shortly before a commemoration of the 80th anniversary of the attack held pier side at the joint base.

The radar blips Schimmel learned of soon became the Japanese fighters and torpedo bombers that laid waste to the Navy’s fleet anchored in Pearl Harbor.

From the vantage point of Fort Shafter, Schimmel and other soldiers watched.

“We had a bird’s eye view,” he said. He saw planes pass overhead toward the harbor, then disappear behind the tree line.

“Then all of a sudden we’d see a tower of smoke and fire, and we’d know that plane had just dropped a bomb on a ship,” he said. 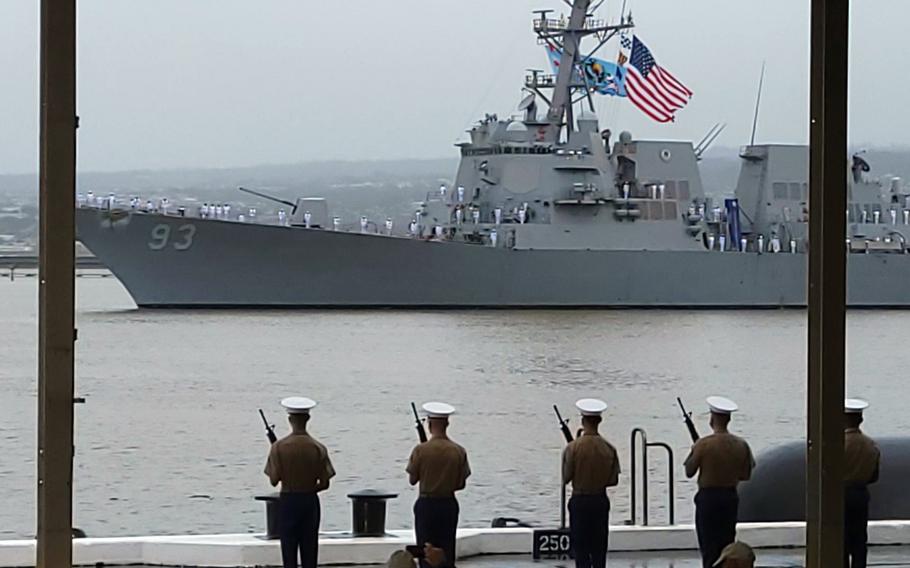 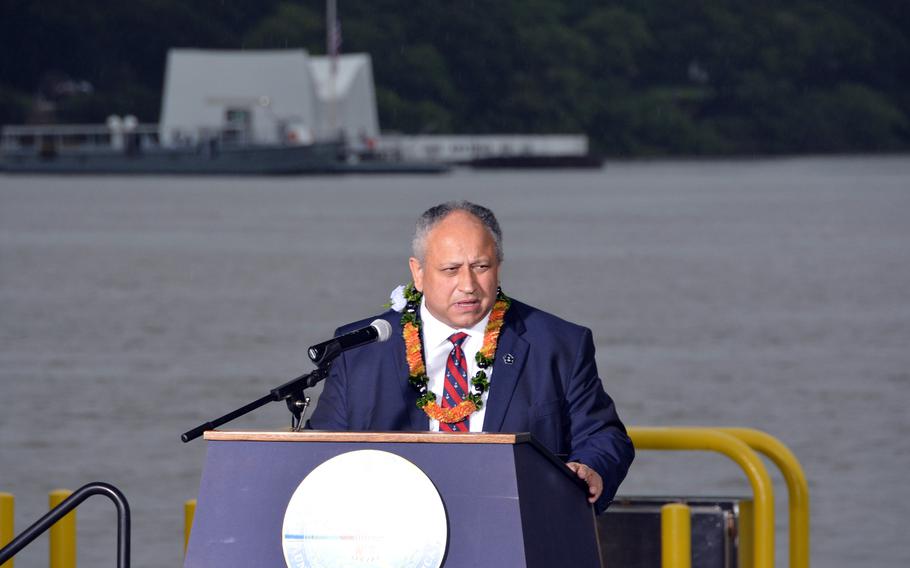 Buy Photo
Secretary of the Navy Carlos Del Toro speaks during the commemoration of the 80th anniversary of the surprise attack on Pearl Harbor at Joint Base Pearl Harbor-Hickam, Hawaii, Tuesday, Dec. 7, 2021. (Wyatt Olson/Stars and Stripes) Buy Photo
A sailor salutes after placing a flower on a wreath honoring troops from each of the armed services who died on Dec. 7, 1941, during a ceremony marking the 80th anniversary of the surprise attack on Pearl Harbor at Joint Base Pearl Harbor-Hickam, Hawaii, Tuesday, Dec. 7, 2021. (Wyatt Olson/Stars and Stripes)

More than 2,300 people died in the surprise attack, during which Japanese planes struck all military bases on Oahu, prompting America’s entrance into World War II.

By the end of the two-hour attack, 21 Navy vessels were destroyed or damaged on Battleship Row and 200 aircraft were demolished. The island was soon under martial law.

The Navy lost 1,999 men, 1,177 of them aboard the USS Arizona, which still lies at the bottom of Pearl Harbor and has become a memorial to the lives lost that day. The Army lost more than 200 men.

This year's annual event marked the return of a live audience, to include aged World War II veterans after none attended last year due to the coronavirus pandemic.

Veterans of World War II are well into their 90s and beyond, and Tuesday’s commemoration was itself a reminder of their fleeting presence eight decades after the attack.

“We are fortunate to have with us today 151 World War II veterans,” Thomas Leatherman, superintendent of the Pearl Harbor National Memorial, said during the ceremony. “Actually, I think that number might be 150 because I believe one of the Pearl Harbor survivors is actually in the hospital here, so our thoughts go out to him today.”

Among them were 32 veterans and 13 civilians who survived the 1941 attack, he said. 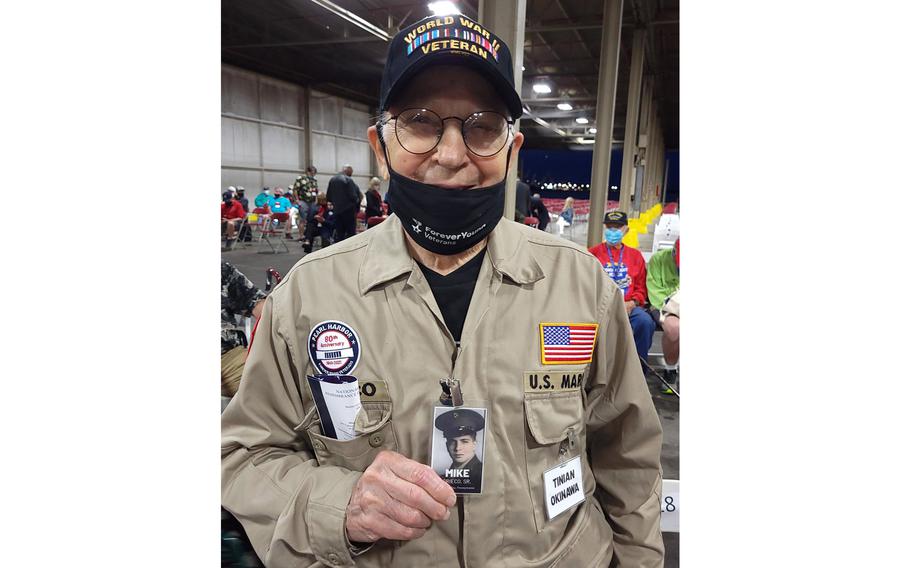 Buy Photo
Michael Greico, 95, who shipped out from San Diego to Saipan in the spring of 1944 and later to Okinawa, poses with a photo of himself as a young Marine at Joint Base Pearl Harbor-Hickam, Hawaii, Tuesday, Dec. 7, 2021. (Wyatt Olson/Stars and Stripes)

Neither of the two remaining survivors of the USS Arizona — Lou Conter and Ken Potts, both 100 — attended.

“In the years to come, we will have fewer and fewer first-person accounts,” Leatherman said. “But our resolve to ensure their stories are not forgotten and will only get stronger.”

Conter offered his thoughts in a prerecorded video played during the ceremony.

“For those of us who survived that terrible day, we all shared something in common,” he said. “Dec. 7, 1941, changed our lives – not just for those of us who were on the USS Arizona or at Pearl Harbor but throughout the United States. It affected those of us who served as well as our families, our friends and our neighbors.”

In the ceremony’s keynote speech, Secretary of the Navy Carlos Del Toro, an immigrant from Cuba and a Navy veteran, said the 1941 attack was not just on the fleet or the nation.

“It was on the very future of freedom and democracy around the world,” he said.

“No one understands the value of those words more …” — here, Del Toro paused to fight back tears — “… than someone born in the land where neither freedom nor democracy exists.”

He ticked off a litany of American men and women of differing national backgrounds and ethnicities who contributed to winning the war in 1945.

“We remember each of them, and so many others of every background and birthplace – all Americans who fought that day or volunteered to serve soon after,” he said.

He recalled the story of Boatswain’s Mate 2nd Class Joe George, who helped six sailors aboard the Arizona escape certain death by directing them to cross hand-over-hand on a rope to his nearby ship, the USS Vestal.

“He tossed them a line despite orders to cut loose from the sinking ship,” Del Toro said.

“We sometimes talk about our victory in World War II as if it was inevitable, only a matter of time,” he said. “But there was nothing inevitable about one sailor’s decision to toss that line. And there was nothing inevitable about the courage it took for those wounded men to get across from the lowest point in the line to the safety of the vessel. And it took millions of individual acts of valor and courage at home and overseas to carry our nation across the long ordeal of World War II.”