100 years of the Tomb of the Unknown Soldier 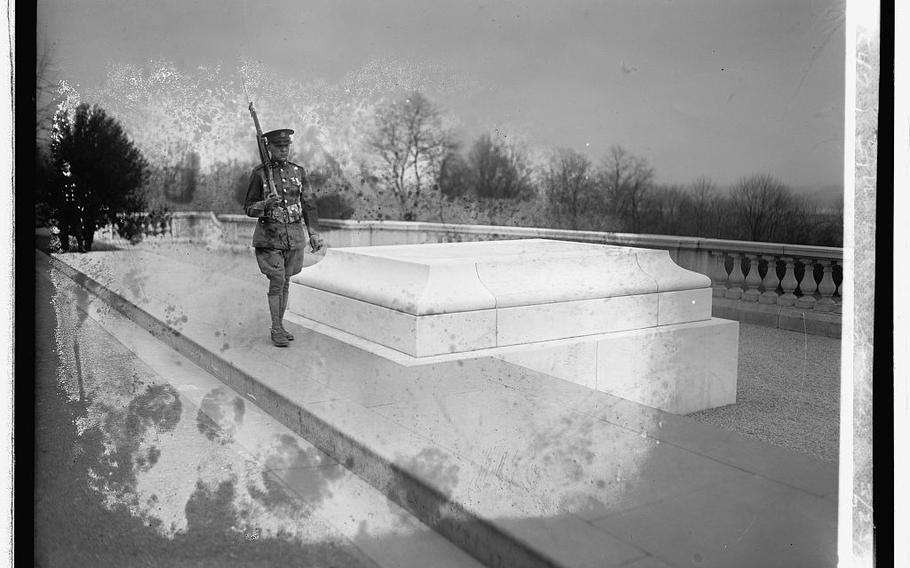 The first military guard at the Tomb of the Unknown Soldier on March 25, 1926. To prevent visitors from climbing or stepping on the tomb, soldiers from Fort Myer, Va., were assigned to guard it during daylight hours beginning in 1926. In 1937, the guard became a 24/7 presence.  (Library of Congress)

WASHINGTON — A casket containing the unidentified remains of a World War I soldier was carried in a horse-drawn wagon through Washington, D.C., across the Potomac River, and into Arlington National Cemetery on Nov. 11, 1921.

Thousands of dignitaries, veterans and American citizens packed into the Memorial Amphitheater at the cemetery, where then-President Warren G. Harding led a state funeral for the unknown soldier. When the ceremony began at noon, bells tolled, and Americans across the country observed two minutes of silence for the fallen man.

“The name of him whose body lies before us took flight with his imperishable soul,” Harding said. “We know not whence he came, but only that his death marks him with the everlasting glory of an American dying for his country. He might have come from any one of millions of American homes.”

Thursday marks 100 years since the remains were entombed at Arlington, creating the iconic Tomb of the Unknown Soldier. The tomb, which attracts millions of visitors every year, now includes the remains of soldiers from World War II and the Korean War. In the past 100 years, it has become a symbol of American service and sacrifice, as well as a place for mourning and reflection.

To mark the anniversary, Arlington National Cemetery planned a series of events, including a procession Thursday that is intended to evoke elements of the unidentified soldier’s funeral procession from 1921. For the first time in decades, visitors to the tomb this week will be allowed to approach it and place flowers near its base.

“One hundred years ago, we laid to rest an unidentified American who fell in the First World War. He has been in our charge ever since,” said Karen Durham-Aguilera, executive director of Army National Military Cemeteries. “The Tomb of the Unknown Soldier stands, physically and symbolically, at the heart of the cemetery — and the heart of the nation.”

The idea for the Tomb of the Unknown Soldier came from Britain and France, which created similar tombs in 1920. Unidentified remains of fallen World War I soldiers were buried that year at Westminster Abbey in London and the Arc de Triomphe in Paris. In both countries, one unidentified soldier symbolized all the unknown troops who were killed in action.

In December 1920, New York Congressman Hamilton Fish Jr., a World War I veteran, proposed legislation that ordered the entombment of one unidentified American soldier at Arlington National Cemetery. Its purpose was to “bring home the body of an unknown American warrior who in himself represents no section, creed or race in the late war and who typifies … the soul of America and the supreme sacrifice of her heroic dead,” according to the legislation.

Congress approved the burial on March 4, 1921. In October of that year, four bodies of unidentified soldiers were exhumed from American military cemeteries in France. Sgt. Edward Younger, a World War I veteran, selected the soldier who would be sent to Arlington National Cemetery by placing white roses on one of the caskets. Younger was given the honor because of his superior service record.

The remains arrived in Washington by ship on Nov. 9, 1921. The casket lay in state in the U.S. Capitol Rotunda on Nov. 10, where about 90,000 people came to pay their respects before the remains were taken to Arlington the following day. 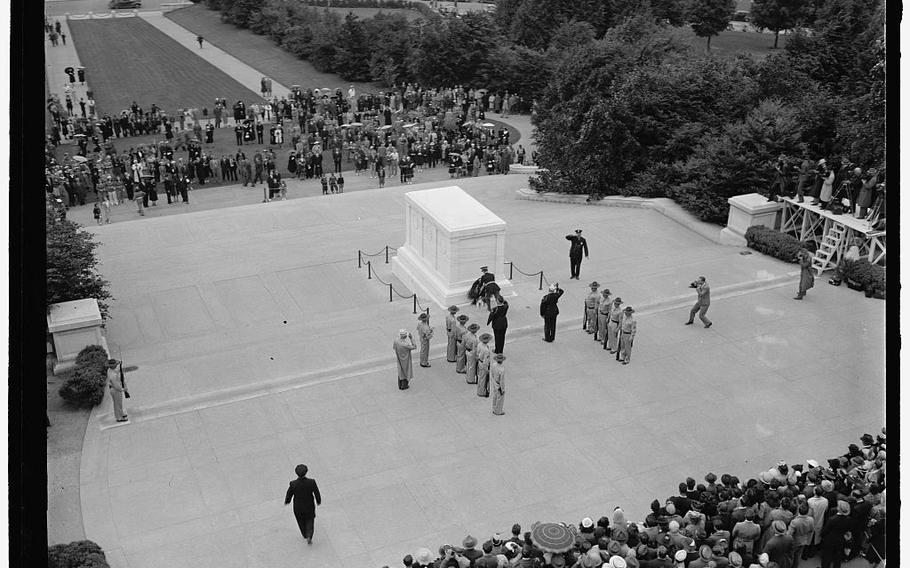 A White House military aide places President Franklin D. Roosevelt’s wreath at the Tomb of the Unknown Soldier on Memorial Day, May 30, 1940. (Library of Congress)

More remains were interred at the Tomb of the Unknown Soldier in the following decades, first in 1958 and then in 1984.

After World War II, Americans supported the idea of adding remains to the tomb that would represent the unidentified dead from that conflict. However, the start of the Korean War delayed those plans.

President Dwight D. Eisenhower approved the idea in 1956 to entomb unidentified remains from World War II and the Korean War. The Army started an extensive process in 1958 to select the remains that would represent World War II soldiers.

William Charlette, a Navy hospital corpsman who was awarded the Medal of Honor for his service in the Korean War, chose one of the caskets to be entombed at Arlington. The others received burials at sea.

About the same time, the Army exhumed four unidentified bodies from the National Cemetery of the Pacific in Hawaii to represent a soldier from the Korean War. Army Master Sgt. Ned Lyle, a recipient of the Distinguished Service Cross, selected one.

The caskets of the World War II and Korean War soldiers arrived in Washington on May 28, 1958, and lay in state at the Capitol for two days. They were then transported to Arlington National Cemetery, where they were placed in crypts beside the World War I soldier.

Years later, following the end of the Vietnam War, Congress faced pressure to designate an unknown soldier from the war to place in the Tomb of the Unknown Soldier. A set of remains was chosen in 1984, and a casket with the remains was entombed on Memorial Day that year.

Following the entombment, work continued at the Defense Department to identify remains recovered from Vietnam. Through those efforts, scientists found evidence that suggested the remains placed in the Tomb of the Unknown soldier were Air Force 1st Lt. Michael Joseph Blassie, a pilot who had been shot down in 1972.

Blassie’s family requested the Pentagon exhume the remains. They were removed from the tomb in 1998 and positively identified as Blassie’s using DNA testing. Blassie’s family had him reinterred at Jefferson Barracks National Cemetery in St. Louis.

The crypt meant for a Vietnam War soldier remains vacant. It was rededicated in 1999 to honor all missing U.S. service members from the Vietnam War.

According to Arlington National Cemetery, there are no plans to inter any more service members in the Tomb of the Unknown Soldier.

“Due to the advancement of mitochondrial DNA sequencing and other forensic technologies, along with improved and faster recovery of fatalities in theater, unidentified American casualties are now exceedingly rare,” cemetery officials said in a statement. “There are no current plans to place unknowns from recent wars.” 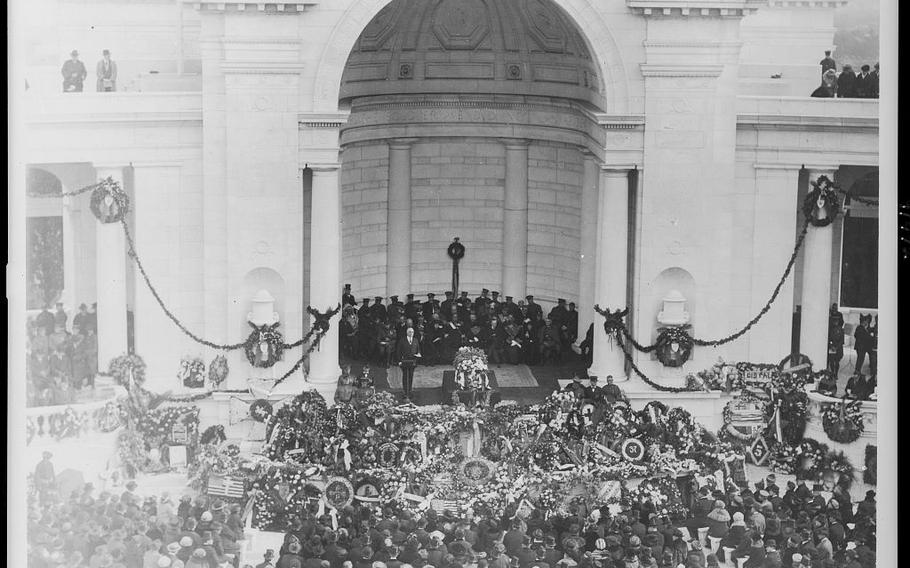 President Warren G. Harding addresses the nation during the funeral service for the Unknown Soldier at Arlington National Cemetery on Nov. 11, 1921.  (Library of Congress) 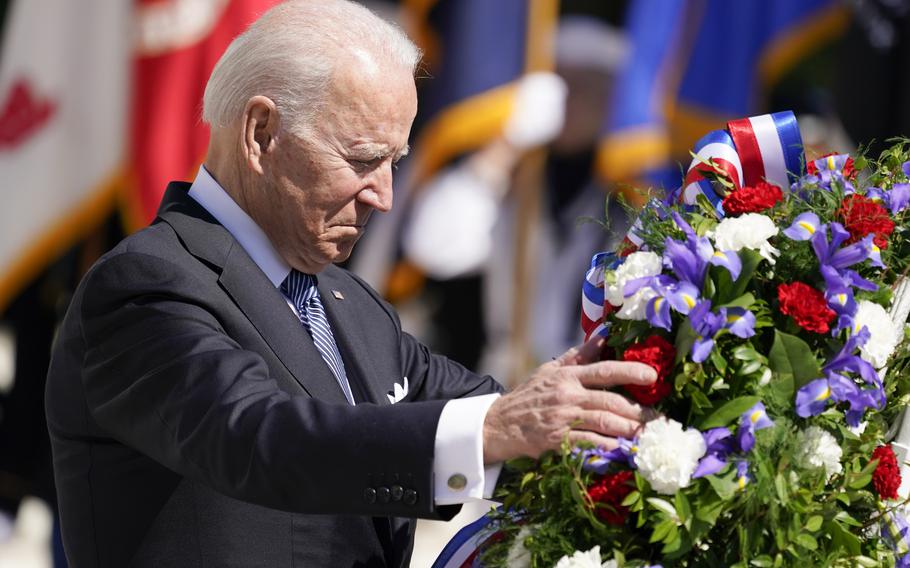 President Joe Biden adjusts a wreath at the Tomb of the Unknown Soldier at Arlington National Cemetery on Memorial Day, Monday, May 31, 2021, in Arlington, Va. (Alex Brandon/AP)

Changes through the years

In its early years, the tomb was a simple marble slab.

Congress acted in 1926 to finish the tomb, kicking off a national design competition to do so. The tomb, as it is today, was designed by two World War I veterans — architect Lorimer Rich and sculptor Thomas Hudson James. They submitted a design for a white marble sarcophagus with neoclassical carvings.

Construction on their design began in 1929 and was completed in 1932. The tomb was decorated with three wreaths on each side panel. Three figures on the front represent peace, victory and valor. On the back is the inscription, “Here rests in honored glory an American soldier known but to God.”

About the time Congress acted to finish the tomb, another change happened — it was given a guard.

By then, visitors began to treat the Tomb of the Unknown Soldier as a tourist attraction. The Army decided in 1925 to post a civilian guard near the tomb to discourage people from climbing or stepping on it.

One year later, soldiers from nearby Fort Myer, Va., were assigned to guard the tomb. At the time, they guarded it only during daylight hours.

The tradition started in 1937 of guards always standing watch over the Tomb of the Unknown Soldier, day and night. Now, soldiers who volunteer to become guards must undergo a strict selection process. They’re trained on precise rituals meant to honor the unidentified soldiers entombed there.

The guards also perform a “shoulder-arms” movement as part of the ceremony during which they place their weapon on the shoulder closest to visitors, signifying they stand between the tomb and any possible threat.

This week is the only time in recent history that visitors have been allowed close to the tomb to place flowers. The public flower-laying ceremony will last through the day on Tuesday and Wednesday. Flowers will then be collected and placed at headstones throughout the cemetery.

In addition to a procession, the cemetery will hold a Veterans Day observance at the tomb Thursday.