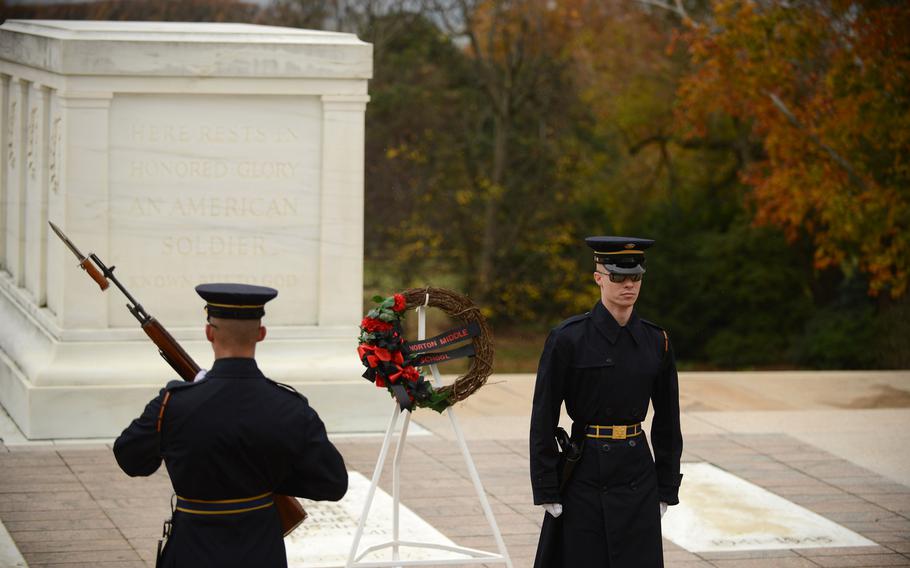 Honor guards patrol the Tomb of the Unknowns at Arlington National Cemetery in Arlington, Va., in 2018. (Astrid Riecken/Washington Post )

ARLINGTON, Va. — Arlington National Cemetery said Wednesday that it will host a public memorial procession and military flyover on Nov. 11 in honor of the 100th anniversary of the Tomb of Unknowns.

The procession, which visitors can observe, will begin at the main entrance to the cemetery on Memorial Avenue near the welcome center.

It will include troops from the 3rd U.S. Infantry Regiment (The Old Guard), the Marine Corps Ceremonial and Guard Company, honor guards from the Air Force, the Navy, and the Coast Guard, and the U.S. Army Band, known as "Pershing's Own."

The procession will enter the cemetery along Eisenhower Drive, then proceed along McClellan Drive and Roosevelt Drive, and conclude at the base of the plaza on the east side of the Tomb near the Roosevelt Fountain, the cemetery said in a statement.

Areas along Memorial Avenue, Eisenhower Drive and near McClellan Drive will be designated as public viewing locations. All visitors must have a government-issued identification.

A flyover will take place over the cemetery during the procession.

On Nov. 11, 1921, a huge cortege accompanied the body of the World War I unknown soldier to the newly-established Tomb in the cemetery across the Potomac River from Washington.

The war, which had claimed the lives of more than 100,000 Americans through combat and disease, and hundreds of thousands of French, British, Germans and others, had ended on Nov. 11, 1918.

Three years later, tens of thousands of people watched as the horse-drawn casket of the unknown was borne through the streets of the Washington, over the river, and into the cemetery.

Next month's procession is free. No tickets are required. Those interested must be along the parade route no later than 8:45 a.m., the cemetery said. The procession will take place rain or shine.

Earlier this month, also in honor of the Tomb's centennial, the cemetery announced that for the first time members of the public will be permitted to lay flowers at the Tomb of the Unknowns Plaza from 9 a.m. to 4 p.m. on Nov. 9 and 10.

Registration is required for the flower ceremony at EventBrite.com. Attendees must have government-issued identification.

Visitors are encouraged to bring their own flowers, the cemetery said. But complimentary roses, daisies and sunflowers will be available.

The cemetery's trams will be available free of charge for the public to reach the Memorial Amphitheater, adjacent to the tomb.

Although the tomb was established with an unknown soldier from World War I, two more crypts for unknowns from World War II and the Korean War, were added in 1958, the cemetery says on its website.

In 1984, an unknown from the war in Vietnam was interred at the Tomb.

But in 1998, the Vietnam unknown was removed and identified as Air Force 1st Lt. Michael Joseph Blassie. He was reburied in Jefferson Barracks National Cemetery in St. Louis in 1999.