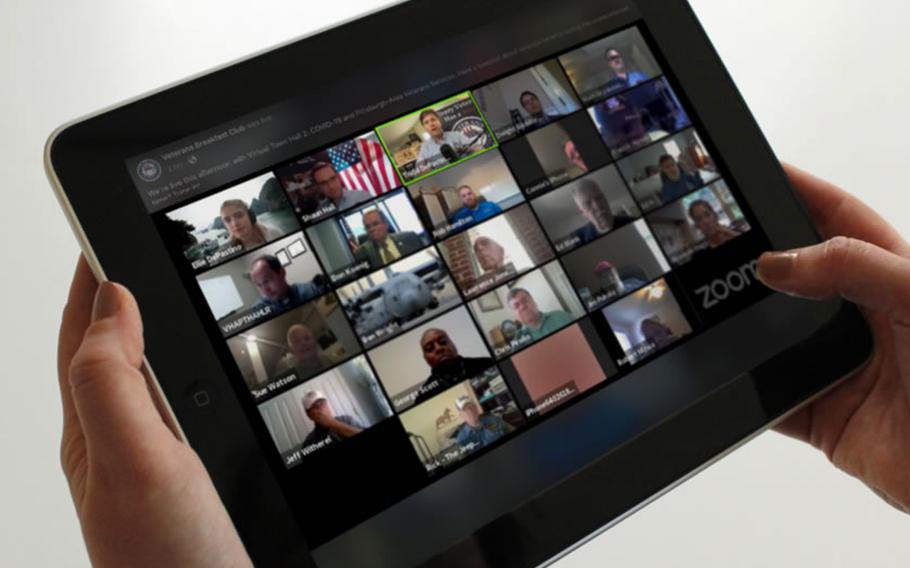 Buy Photo
The Veterans Breakfast Club started in 2008 as a monthly get-together for World War II veterans in Pittsburgh but became a series of online Zoom meetings as the coronavirus pandemic spread last year. (Seth Robson/Stars and Stripes)

An online forum is connecting some of America’s oldest veterans with youngsters interested in their stories.

The Veterans Breakfast Club started in 2008 as a monthly get-together for World War II veterans in Pittsburgh but became a series of online Zoom meetings as the coronavirus pandemic spread last year.

Most of those who join are military veterans, but some young people have begun tuning in, giving their elders a chance to pass on stories and wisdom acquired from their time in uniform.

One of the youths, Trey Burman, 14, of Annapolis, Md., participated in dozens of Zoom calls with the veterans this year after his grandfather recommended them.

Anderson, 99, flew P-51 Mustangs and racked up 16 ½ kills during two tours against the German Luftwaffe in Europe.

“After that I kept going to the Zooms,” Burman said. “No matter the topic, it’s very humbling to see these people who have done the impossible and come back.”

It’s inspiring to see the camaraderie of veterans of all ages, genders and ethnicities on the Zoom calls, he said.

One veteran interacting with the youngsters is Donald Nemchick, 70, of Pittsburgh. The former Navy petty officer served from 1970-74 at naval communication stations on Guam, Subic Bay in the Philippines and Cam Ranh Bay, South Vietnam.

He deployed aboard the aircraft carrier USS Constellation, which launched the final combat sorties over Vietnam and Laos in July 1973, he said Friday via Zoom.

“Every veteran has a story,” is the Veterans Breakfast Club tagline, he said.

During the Vietnam War, Nemchick’s job involved communication with aviators and submarines on missions across the Pacific.

“We had jets launching every four to five seconds by steam catapult,” the veteran told the youngster of his time on the carrier. “The danger of that is so evident.”

He recalled night landings on a pitch-black sea where aircraft were caught by a tail hook on a cable across the deck.

“It’s important to give motivation and inspiration and some leadership to these young men,” Nemchick said of his interaction with young people during Zoom meetings. “It’s inspiring to me as a veteran to see young men doing what they should be doing.”

The son of a civilian sailing coach at the U.S. Naval Academy, Burman said the meetings have firmed up his resolve to serve. His goal is to become a Navy nuclear engineer aboard a submarine and eventually work in the civilian nuclear power industry.

Henry Schoepke, 14, of Madison, Wis., collects veterans’ autographs and found the Veterans Breakfast Club online. He has tuned in regularly over the past year, he said in a Zoom interview Saturday.

Schoepke’s interactions with the veterans have got him thinking about a career in military history, he said.

The move online during the pandemic has massively increased engagement for the veterans who are talking to people all over the world, Nemchick said.

The Veterans Breakfast Club has a Zoom meeting that starts every Monday at 7 p.m. Eastern Time. Tune in through the group’s website at veteransbreakfastclub.org