Black and Hispanic veterans more likely to get COVID shots than whites early on, though nearly all benefited 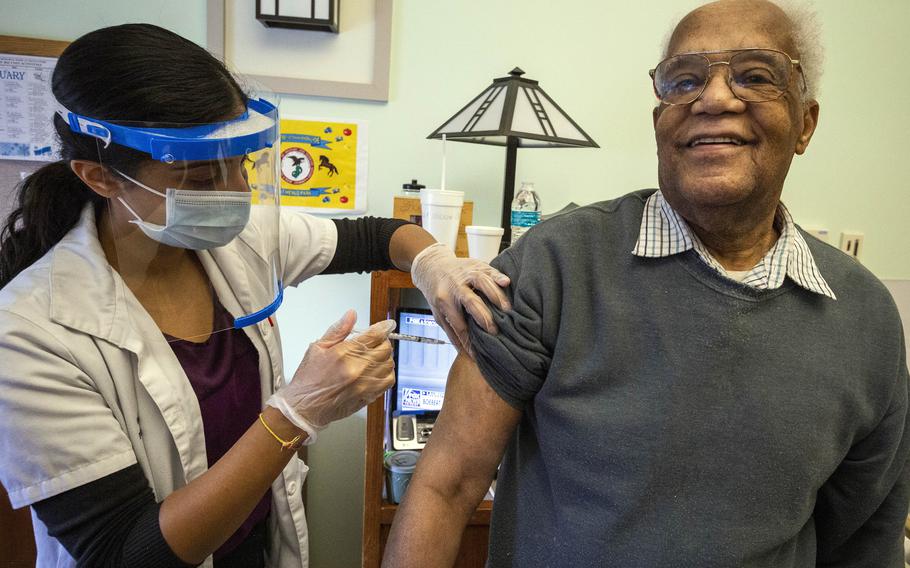 Carl Wilson receives the COVID-19 vaccination at the New Jersey Veterans Memorial Home at Menlo Park in Edison, N.J., in January. The early and rapid rollout of coronavirus vaccines by the Veterans Health Administration saved hundreds of lives and provided robust protection in the diverse, older veterans community, according to a study published Oct. 6, 2021. (Mark Olsen/New Jersey National Guard)

African American and Hispanic veterans were more likely than their white counterparts to get the COVID-19 vaccine at a veterans’ health facility in the first few months that mRNA vaccines were available in the U.S, a study published Wednesday found.

Non-Hispanic Black veterans who received care through the Veterans Health Administration made up 21% of those who had at least one dose of the Pfizer-BioNTech or Moderna vaccine in the three months following the two vaccines’ rollout in December, according to the study published on the Journal of the American Medical Association’s Network Open website.

Among Hispanic veterans, 18% had at least a first dose of one of the two mRNA shots after they were authorized for emergency use by the U.S. Food and Drug Administration.

Black people made up just 17% of the more than 6.6 million veterans whose electronic health records were looked at for the study, and Hispanics represented just 7% of the study population.

White veterans, on the other hand, made up two-thirds of the study population but only 22% of those who were inoculated during the study period.

None of the fully vaccinated veterans died during the study period, and the vaccine was 95% effective at preventing infection in veterans regardless of race, sex, age or residence in an urban or rural area.

That contrasts with how COVID-19 has affected the general population, disproportionately hitting racial and ethnic minorities and low-income communities, the study found.

Getting the vaccine gave veterans, who are older and often have underlying health conditions, robust protection against infection from the coronavirus, which as of this month has claimed about 700,000 U.S. lives.

Most infections detected during the study period were in younger veterans, who were more likely to be white, the study found.

The VHA rapidly rolled out a program to inoculate veterans against COVID-19 as soon as the two mRNA vaccines were authorized by the FDA.

The pandemic already had a devastating effect on veterans by then, with some 207,000 infections reported among VHA-enrolled veterans prior to authorization and around 10,000 deaths of veterans in VHA care.

More than a third of pre-vaccination infections were among Black veterans, and the figure was 13% among Hispanics. Both groups make up a small proportion of the overall VHA care population, which is predominantly composed of white men.

The differences in health outcomes could not be attributed to underlying health conditions, the study said.

“Over a period of only 3 months after the first COVID-19 vaccine was authorized, the VHA successfully vaccinated and tested millions of veterans of all socioeconomic groups,” it said.

The success of the VHA vaccination program prompted Congress to pass a law authorizing the VA to expand its vaccination effort beyond veterans who receive care through the VHA.