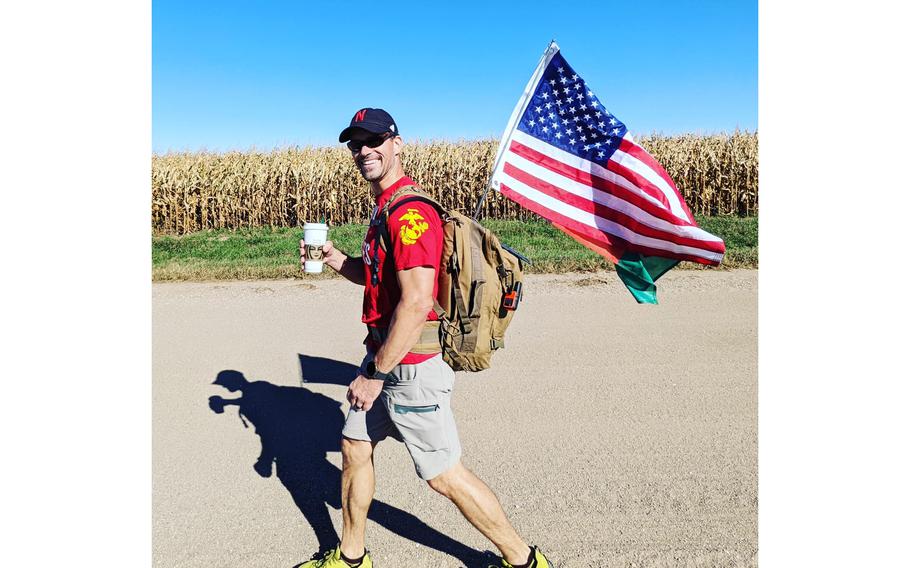 So Koenig, 45, and honorably discharged in 2005, wanted to do something in to help his fellow officer who is in need.

On Saturday, he started a 145-mile walk to raise awareness about Afghan refugees and funds to help with the relocation of Mubarak’s family from Fort Bliss, Texas, to the Sarasota area.

The distance mirrors that traveled by the family to arrive at the airport in Kabul.

“He supported me in talking to locals who had something to share with us about something going on in their village or someplace we might need to look,” Koenig said Monday morning of their shared experience in Afghanistan. He spoke by phone about three miles outside of West Point, Nebraska — which is about 59 miles along his journey between his current residence near Omaha, Nebraska, and his hometown of Hartington, Nebraska.

In addition to raising awareness, Koenig said the trek is a spiritual journey where he can experience the backcountry where he grew up and stop to pay tribute at veterans memorials in communities along the way.

“Every Nebraska town has some way they honor their veterans,” he said. “I’ve been finding all of these veterans monuments and plaques.

“It’s a very uplifting and rewarding thing for me, even beyond the fundraising we’re doing,’ Koenig said.

The trek is dubbed a “Ruck for Refugees.” Information can be found at https://www.ruckforrefugees.com or for frequent daily updates through https://www.facebook.com/RuckForRefugees.

Mubarak, who is only identified by his last name for security reasons, brought 33 of 34 members of his family to the U.S. from Afghanistan just prior to the Aug. 31 U.S. troop withdrawal deadline.

The family, which had been living in Texas while securing their Special Immigrant Visas, is now in the process of moving to the Sarasota area, with a rough target date of Oct. 31.

Koenig said Mubarak saved his life and the life of other Marines countless times, just by being an alert interpreter.

“He’s the guy who grew up there, he would be out on missions with us, out beyond the wire,” Koenig said “If he sensed something was wrong, if something seemed off, there’s cultural cues we as Americans don’t pick up on.

“Or he’d spot something in the road that might be out of place.”

Mubarak could also communicate with residents who wanted to help and inform them about a potential ambush or newly buried improvised explosive device.

“One rock is out of place in the mountainside next to their village, they know about it,” Koenig added.

“He got us out of situations or helped us to avoid situations that had we proceeded, the likelihood that it could have resulted in a gunfight with someone killed or wounded was high.”

Koenig, who works in commercial real estate in Nebraska, hopes to help Mubarak find long-term housing for his family in the Sarasota area.

With that in mind, he has a goal of purchasing a multifamily home or small apartment complex.

The GoFundMe page affiliated to “Ruck for Refugees — Afghan Family Resettle Housing“ has a $250,000 goal, which Koenig figures should be enough for a down payment on a complex. As of Monday afternoon, he has raised a little more than $9,000 — mostly from people in Nebraska, who only know about Mubarak and his family through the walk.

Koenig was in Sarasota County prior to starting his fundraiser and is working with a local broker in hopes of finding a suitable location.

“My understanding is the community there in Sarasota has been very supportive,” Koenig said.

In addition to a GoFundMe page started by Sarasota County Sheriff Kurt Hoffman, area residents have donated clothing, furniture and other items to help the families once they arrive.

The two biggest needs left unmet for the family, Koenig noted, are transportation and housing.

Koenig echoed previous observations from Mubarak, Sheriff Hoffman and his cousin Col. Randy Hoffman, USMC Ret., that once settled, the 33 people should quickly fit in with the community.

All adults are eager to work and a few are trained professionals. One of Mubarak’s sisters is a physician and a brother in law is a lab tech.

Koenig pointed to Mubarak’s sister’s achievement as validation for the U.S. efforts in Afghanistan.

“Had we not come into Afghanistan in 2001, his sister would not have had an education,” Koenig said. “She got that training and now she’s bringing it here to the U.S. in a place where we need doctors.”