‘His generation set the example of service’: WWII veteran captured Germans off of Delaware’s coast 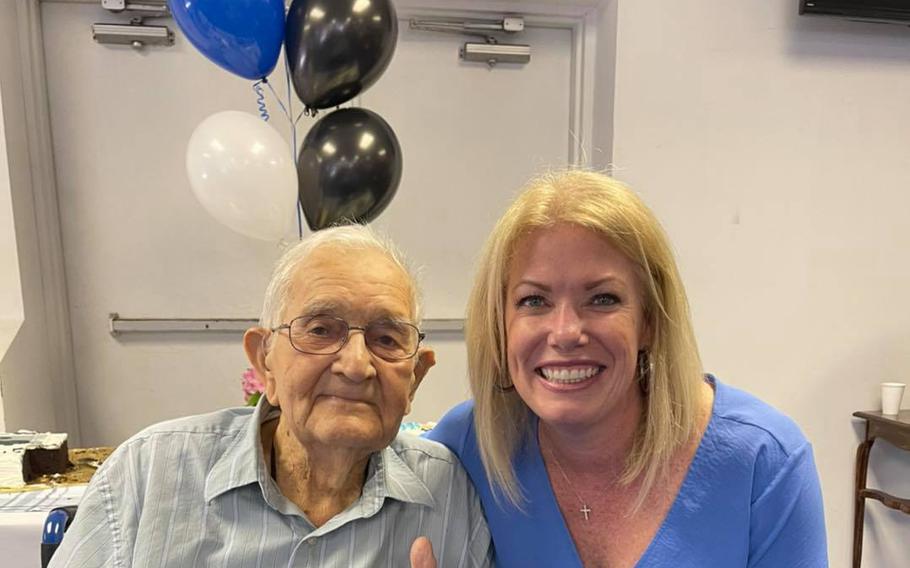 "That was the prime duty of our crews because they spotted several," Elrod said. "I actually saw several that were captured and brought on shore. We were never told where the German POWs were sent."

He started on patrol duty at Bethany and then trained to be an electrician to cover those duties on a ship.

When Japan surrendered, "it was quite a relief," he said.

"I was stationed at Norfolk and was scheduled to go to the Pacific for the invasion of Japan. We found out that the bomb had been dropped and our orders were changed. We ended up going to Europe to take POWs home and bring our GIs back," Elrod said.

The voyage home was harrowing.

"We had to sail through a hurricane and the ship was almost capsized," he said. "No one could sleep because we got thrown from our bunks during the storm."

Elrod, who just turned 100 years old, is part of what's been called "The Greatest Generation" for their efforts that helped win the war in military service, industry and in the community.

However, there are only 912 WWII veterans living in Delaware, according to the latest statistics from 2020 from The National WWII Museum. That's down from 1,562 in a Sept. 30, 2018, Veterans Affairs report, said Jacob L. Dillon, public affairs officer at the Wilmington Veterans Affairs Medical Center.

To make sure stories like Elrod's aren't forgotten, many museums and veterans groups across the state have monuments, displays, photographs and records about the war. A recent addition was the Pearl Harbor memorial at Lake Como in Smyrna in 2018 that includes a 6,000-pound anchor from a 1942 U.S. Navy destroyer.

Vince DiDonato, a past commander of Smyrna's American Legion Post 14, said veterans groups lead a ceremony at the memorial each year, placing wreaths at the site, and he always thinks of his father who served in the Army Air Corps in World War II and his mother who worked at a Marine Corps supply depot.

"The younger generation has no idea what that greatest generation went through because that's not being taught much in school anymore," said DiDonato. "It's a shame because it's going to be lost history."

The Delaware Public Archives is working to preserve that history with a large collection on World War II for researchers and genealogists as well as family members of a veteran, said Stephen Marz, director and state archivist.

"We have photographs, records on military pay, state reports, newspapers, personal collections and even some private sound recordings," Marz said. "We are always happy to assist researchers uncover previously unknown facts, especially when they are researching a family member."

Elrod's four children, Edward Kevin, Joel Susan, Mark Alan and Drew Christian, ranging in age from 74 to 56, celebrated his life of service to his family, his country and his community with a 100th birthday party.

"I think his generation set the example of service over self and the importance of being part of a cause," said Joel.

Elrod and his children said they're forever grateful for a chance encounter at a Wilmington candy store while Elrod was on leave during the war. That's when he met Frances, the woman he would marry.

"I remember that she worked at the Fannie Farmer store at 4th and Market," said Elrod. "She was going to vocational school at that time and working there was part of her training. She invited us — me and two of my buddies — over to her house to eat and we went over. I managed to ask if I could come over again, and from that point I just kept coming back."

Edward and Frances married June 9, 1945, less than three months before the end of the war, and they spent more than 65 years together before she passed away in 2011.

"Dad's service really changed his life and I'm proud that he answered that call to serve," said Kevin. "His service and being stationed here in Delaware meant that he met our mom and settled here."

The children believe their father's positive attitude and calm demeanor, shaped in part by WWII, are major reasons for his longevity.

"He takes everything in stride," Drew said. "I think this comes from growing up in a large family during the Depression and then seeing the world at war. He really knows how truly bad things can be."

After the war, the Elrods built a home and raised their children. He worked for the Warner Cement Company and then the U.S. Postal Service until he retired in 1987.

During his century of life, Elrod said the biggest change he's seen is in transportation, "with the use of aircraft and more cars. They're faster and better."

Elrod has fond memories of life in the Wilmington and New Castle areas: "We liked taking our family to many places. Before the [Delaware Memorial] bridge was built, we would take the ferry to New Jersey and eat at some of the restaurants over there. We also went to air shows and to see the fireworks at the Wilmington Airport," now New Castle Airport."

"The bridge was pretty special because I was working for the Warner Company when it was built and drove many loads of concrete to that site. I actually have money in the bridge. I tossed some of my change into the concrete mix," he said.

Joel agreed: "Dad is great at finding solutions or work-arounds to problems. The house he lives in now started with two bedrooms and now has five because he and mom decided that adding on was better than moving. He was never afraid of hard work."

Their father was a deacon at their church, responsible for the buildings and grounds.

"He was the guy that the church called on a Saturday night to take care of a plumbing or electrical problem and he would often take me with him to help," said Mark.

Drew said, "He worked long hard hours driving trucks his entire career, organized the work on the building and grounds of our church and still found time to spend with his family."

Their mom and dad took them on vacations to the beach, national parks, historical sites and to visit their dad's family Tennessee.

One of Mark's favorite moments is when his parents visited him when he teaching in Florence, Italy in 1998.

"I got to visit Naples and Pompeii with mom and dad. He had been there during the war and I loved watching him look at places he hadn't seen in over 50 years," said Mark.

His children talked about how proud they are that their father served during World War II and how that reflected his personality.

"He told me once that he enlisted in the Coast Guard on advice of his oldest brother because he wanted to serve his country but didn't want to hurt anyone," Mark said. "It wasn't until many years later that I learned to appreciate that."

Drew said, "He knew of several men that were not so fortunate to come home, raise families and have happy lives. He always fostered a respect for the military in all of us."

One of the most important lessons he demonstrated, Joel said, is keeping his promises.

"When our mom got sick, he promised her that she would not go to a nursing home," Joel said. "The idea terrified her. Although it was a huge task and sometimes seemed impossible, he cared for her in their home until she passed away in 2011."

Elrod still takes care basic tasks around his home. He loves to eat out, watch vintage cowboy shows and the TV news, enjoys National Geographic magazine and still reads the newspaper every day.

"If I had to do it all over again, I'd do the same thing," he said. "I could have gone into any branch of service and my brother talked me into the Coast Guard. I'm glad he did. I'm like that guy in the movies — I've had a wonderful life."