His WWII Navy uniform was in tatters. A seamstress made him a new one, and he wore it on his 97th birthday 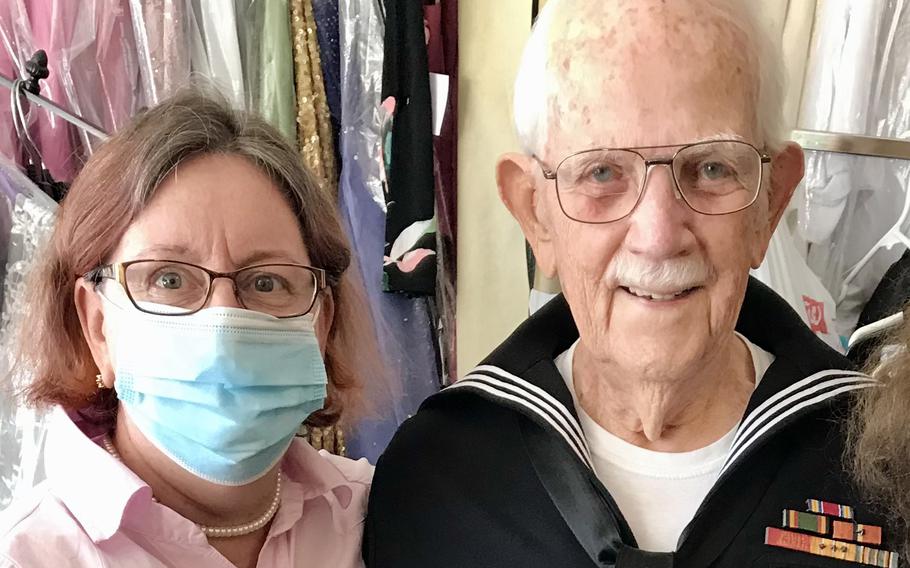 Williams and Hall in Causeway Alterations. They now meet regularly for breakfast in Dunedin, Fla. (Courtesy of Susan Williams)

At age 97, Joe Hall is realistic about his future.

“I feel pretty good, but at my age, the odds are that I could go at any minute,” said Hall, who lives in Southwest Florida. “If I do, that’s fine. I’m ready. But I want to look sharp when I’m reunited with the guys.”

Specifically, he wants a proper uniform to be buried in.

The “guys” are Hall’s World War II gunnery mates, all now deceased. Hall is the last one left of the six-member gun crew he served with aboard the USS Brackett, a destroyer escort in the Pacific.

With no family of his own — his wife, Ethel, passed away five years ago and they didn’t have children — it became important to Hall to have his last requests lined up, he said.

When he saw a sewing shop while walking in his neighborhood in Dunedin in January, he decided to pop in and ask if somebody could make him a new Navy uniform.

“The other one doesn’t fit so good now, and the moths got to it,” Hall said. “I wanted a new uniform ready to go for when I’m buried. My friends were all buried in their uniforms, and I want that, too.”

At Causeway Alterations, Susan Williams was in the back of the shop, hemming a wedding dress, when she overheard Hall talking to the store owner. “I knew it was something I could do,” said Williams, a retired county prosecutor from Pennsylvania who recently moved to Florida and works part-time in the shop to stay busy.

Williams, 57, said she stuck her head out from the back room and asked Hall, “dress blues or white?”

“My dad had served during the Korean War on the USS Worcester, so I know a few things about the Navy,” said Williams, who learned to sew from her mother and made her own wedding dress. Also, she added, “I wasn’t about to turn away a World War II vet who wanted to be buried in his uniform.” 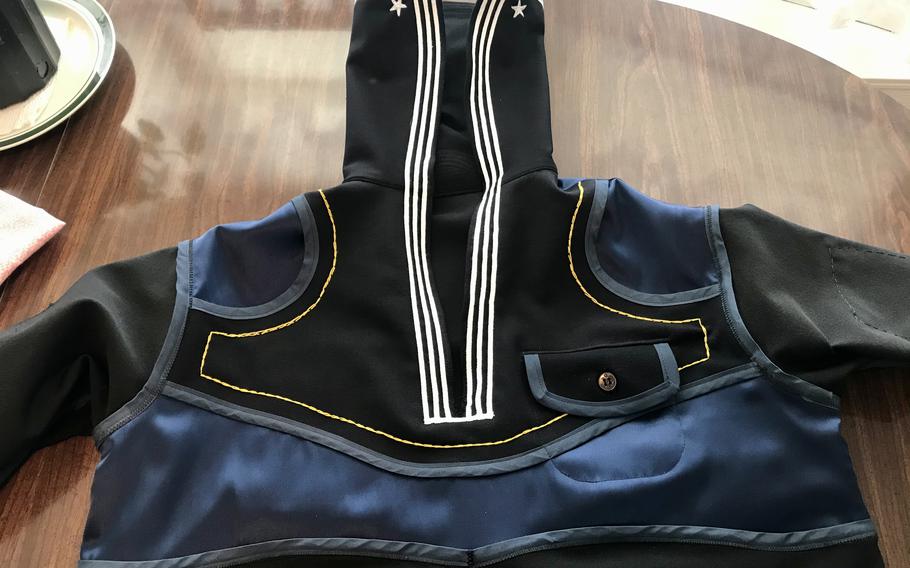 Williams said she does freelance alterations from her home a few towns away in Tarpon Springs and is rarely in the shop. She took that as a sign that “this really was meant to be.” Hall made an appointment to come back so Williams could measure him, and he brought in his original uniform so she could see what it looked like. “I was so happy that she wanted to do this for an old guy like me,” he said.

Williams bought some wool-blend fabric that matched Hall’s old uniform, then she spent about 100 hours over the next three weeks designing patterns, cutting pieces for a sailor’s dress top and pants, and sewing everything together.

“I took all of the original insignia and patches off the old uniform and added them to the new one,” she said. “There was a lot of detail work, because things were made much differently in 1942 than today. And I wanted everything to match.”

Once she’d added silk lining, buttonholes and some hand-embroidered details in gold thread, Williams called Hall in February and told him his uniform was ready.

“It was just beautiful — it fit perfectly,” Hall said. “My heart beat a little faster as soon as I put it on.” Williams said Hall reimbursed her for about $300 in materials, but she wouldn’t accept payment for her labor. “If I could have afforded at the time to pay for the materials, I would have done that, too,” she said.

“When Mr. Hall tried it on and looked in the mirror, he said, ‘I feel like I’m back with my old buddies,’ “ Williams recalled. “I started to cry because he was so happy.”

Over the past six months, she and Hall have become good friends, she said. They meet regularly to share stories over breakfast at a bowling alley cafe, not far from the alterations shop. 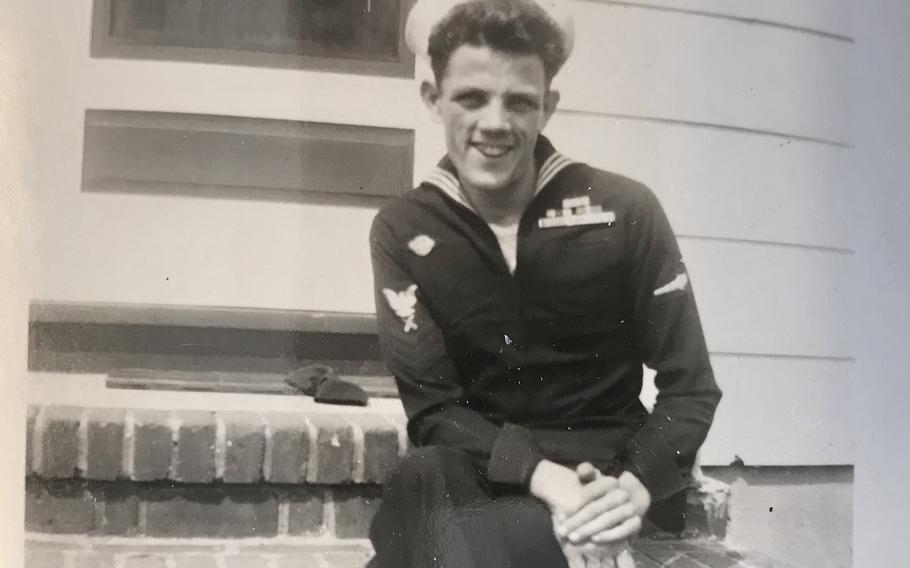 Joe Hall in New Jersey after his discharge from the Navy in August 1946. (Courtesy of Joe Hall)

Williams learned that Hall’s own story had a sad beginning. When he was 3, his mother died giving birth to his little brother, Hall said. “I was raised in Brooklyn during the Depression by my father and grandfather,” he said. “My dad was a streetcar operator, and we didn’t have much. So when I was 17, I enlisted in the Navy.” Hall said he took pride in his role as a ship gunner’s mate.

“I never knew the Pacific was out there until I went,” he said. “I became close friends with my little crew of six men. We had a dangerous job and we looked out for each other.”

After the war ended, Hall put his uniform in the back of a closet, married the “most beautiful girl in the world” and went to work for the New York City sanitation department, he said.

Like Williams, he moved to Florida to retire. When his wife died, it became important to him to have a plan in place for his own burial, he said. “Every morning, my neighbor knocks on my door and hollers, ‘Are you up, Joe?’ “ he said. “Someday, I know I won’t be up.”

Since Williams made him the uniform, he’s worn it a couple of times for special occasions like his birthday in March and the Fourth of July.

“Sometimes I get up in the morning and see that uniform hanging there and I just have to put it on,” he said. “It makes me feel good. I’ll stand in front of the mirror and tell myself, ‘You’re looking pretty good, Joe.’ “