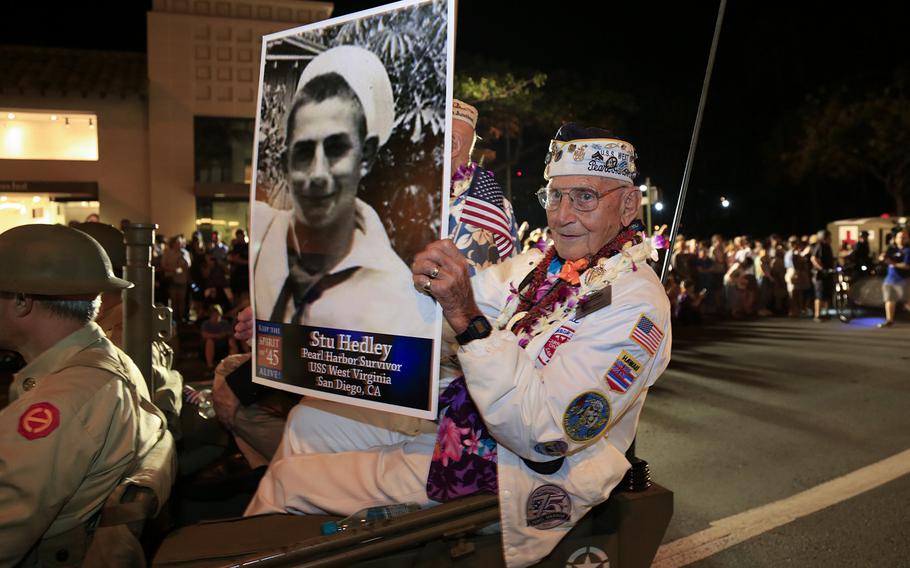 San Diego resident and Pearl Harbor survivor Stu Hedley rode in the back of a jeep during the Pearl Harbor Memorial Parade through the streets of Honolulu, Hawaii, on December 7, 2016. (Howard Lipin, San Diego Union-Tribune/TNS)

SAN DIEGO (Tribune News Service) — Stu Hedley, a Pearl Harbor survivor and Navy veteran who spent decades stoking the flames of remembrance about that pivotal moment in American history, died Wednesday from COVID-19. He was 99.

Short in stature but long on stamina, the San Diegan was a fixture at annual public events honoring military veterans and a frequent speaker at local schools and in front of service organizations.

Clad in a Hawaiian shirt, white slacks and a medallion-bedecked garrison cap, Hedley made hundreds of appearances, in San Diego and elsewhere, sometimes going to multiple functions on the same day. By his count, he spoke to more than 200,000 people over the years.

“He never wanted what happened at Pearl Harbor to be forgotten,” said David Koontz, marketing director at the USS Midway Museum. “He was passionate about making sure we remembered the courage of those who were there that day.”

Hedley considered it an honor and a duty to represent those who fought in World War II, especially those who were killed in the conflict. “They were the heroes,” he often said whenever anyone tried to attach that label to him.

More than 100 of his shipmates aboard the battleship West Virginia died at Pearl Harbor during the Dec. 7, 1941, attack by the Japanese that shoved the United States into the war.

Hedley, a 20-year-old seaman apprentice, narrowly escaped death several times as the ship was hit by torpedoes and bombs.

One explosion tore through the gun turret where he was positioned, killing a dozen of his shipmates. Escaping to shore meant swimming around and under flaming oil, sucking in breaths of scorching air. Taken by ambulance to a dispensary, he dodged shattering glass and flying shrapnel during a second wave of Japanese strafing.

Born Oct. 29, 1921, in Florida, and raised near Buffalo, New York, Hedley was fascinated as a child by the military and warfare. He drew pictures of airplanes dropping bombs when he was a child.

“Little did I realize at the age of 10 that one day I was going to be involved with all that,” he told elementary schoolchildren in a classroom presentation in Hawaii five years ago.

He tried to join the Navy out of high school, but at 4-foot-11 was too short. Recruiters sent him to the Civilian Conservation Corps instead.

A couple of years later, he had reached 5-foot-2 and was allowed in. He went aboard the West Virginia on his 19th birthday.

After Pearl Harbor, Hedley was stationed on the cruiser San Francisco and the destroyer Massey and saw action in more than a dozen battles in the South Pacific, including at Guadalcanal and Okinawa. He often credited surviving the war to his Christian faith. 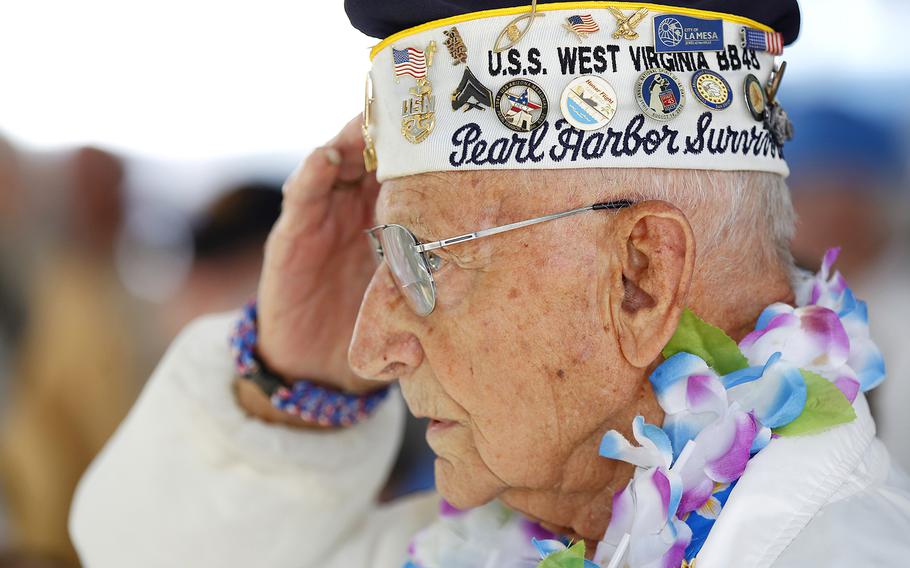 Trained as an electrician, Hedley spent 20 years in the Navy, retiring in 1960. He worked another 20 years in the La Mesa-Spring Valley school district. He and his wife Wanda raised five children in Clairemont.

In the mid-1970s, Hedley went back to Pearl Harbor for the first time, as a tourist, and had flashbacks from the war. He’d seen bodies blown into the air when the battleship Arizona exploded. He’d found one of his friends cut in half by a sheet of flying glass.

Like many World War II veterans, he hadn’t talked much about his experiences with relatives or friends, not even his wife. But he began opening up and joined the San Diego chapter of the Pearl Harbor Survivors Association.

Now defunct, but once 30,000-members strong, the association had a two-sentence motto — “Remember Pearl Harbor, Keep America Alert” — and Hedley took both to heart. He returned often for the annual remembrances in Hawaii.

“Pearl Harbor was not a defeat,” he liked to say. “It was an eye-opener.”

He gave talks to just about anyone who asked. Schools. Churches. Military commands. Kiwanis clubs. He wanted people to know not just what happened, but why, and to understand the cost of war. It upset him when he looked in school history books and saw Pearl Harbor reduced to two paragraphs.

“I remember going to (the San Diego-area city of) Ramona with him once to talk to some Boy Scouts,” said Kathy Hansen, a Navy vet and a longtime friend. “Kids are a tough crowd and he told them stories for two hours. They couldn’t get enough.”

Hedley served several terms as president of the local survivors chapter, the largest in the country. He was in charge when it disbanded two years ago because so few survivors were left.

“It’s certainly the end of an era,” he said at the time, “and it leaves me a little heartbroken.”

In addition to his Pearl Harbor-related interests, Hedley was active with Shadow Mountain Community Church, and with community organizations feeding the homeless.

His decades of service prompted a local nonprofit, the Enlisted Leadership Foundation, to create the Chief Stuart Hedley Legacy Award, given annually to three chief petty officers for their leadership, mentorship and volunteerism.

Survivors include three daughters, Barbara, Patty and Nancy, and a son, Ray. He was predeceased by Wanda, his wife of 64 years, and another daughter, Pam.