DERRY, N.H. (Tribune News Service) — Milestones filled a local veterans post home Saturday as one veteran was honored not only for his centennial birthday but also for service to the nation.

Plotkin was not only honored for his longevity but for his service as a soldier in the 66th U.S. Army Division serving in Europe and also as a member of the fated crew aboard the S.S. Leopoldville, a former passenger liner used as a troop transport during World War II

On Christmas Eve in 1944, the Leopoldville left its pier in Southhampton, England, with more than 2,000 American troops aboard and headed across the English Channel en route to Cherbourg, France.

With only 5 miles to go before reaching its destination, the Leopoldville was hit and sunk by German submarine torpedoes. There were 763 American soldiers killed, and 493 were never recovered from the 48-degree waters.

Plotkin survived and eventually went on to fight in the Battle of the Bulge.

For veterans in Derry on Saturday afternoon, it was time to honor this soldier.

That included many tokens of thanks and tribute from members of both the American Legion and Veterans of Foreign Wars.

Plotkin was also given the honor of being a lifetime member of both the Legion and VFW.

In a birthday card to Plotkin, Hassan wrote that not only was his 100th birthday a major life milestone, but his service to the nation during World War II was also worthy of pride.

“As you celebrate your many years in New Hampshire, I hope that you reflect on the memories you have made with joy and are filled with pride for all that you have accomplished,” Hassan said in her card. “I also want to thank you for your dedicated service to this country in World War II. We owe it to you, and to all who serve — or have ever served — to continue to work to make sure that our state and our nation are ever worthy of your sacrifice.”

Addressing the veteran Saturday, Hassan added her own father was a survivor of the Battle of Bulge and compared her own family’s experience with that of Plotkin, saying as soldiers both he and her father knew the meaning of honor, commitment and service.

“And what we are capable of doing, in devotion to freedom makes us a country and a people,” Hassan said, adding it wasn’t about serving a specific party or cause, it was one cause among many in a common goal.

For Plotkin, it was an overwhelming afternoon full of tributes he said he didn’t deserve but appreciated.

“It’s hard for me to speak,” Plotkin said. “I never expected anything like this, it’s all been so great.”

He went on to say what happened that Christmas Eve aboard the Leopoldville was a tragedy he’ll never forget.

“From my heart, I truly thank you all,” he said.

Plotkin also made it a point to tell everyone attending he joined the Boy Scouts at the age of 12, and also remembered that it was an American Legion post that sponsored his troop. 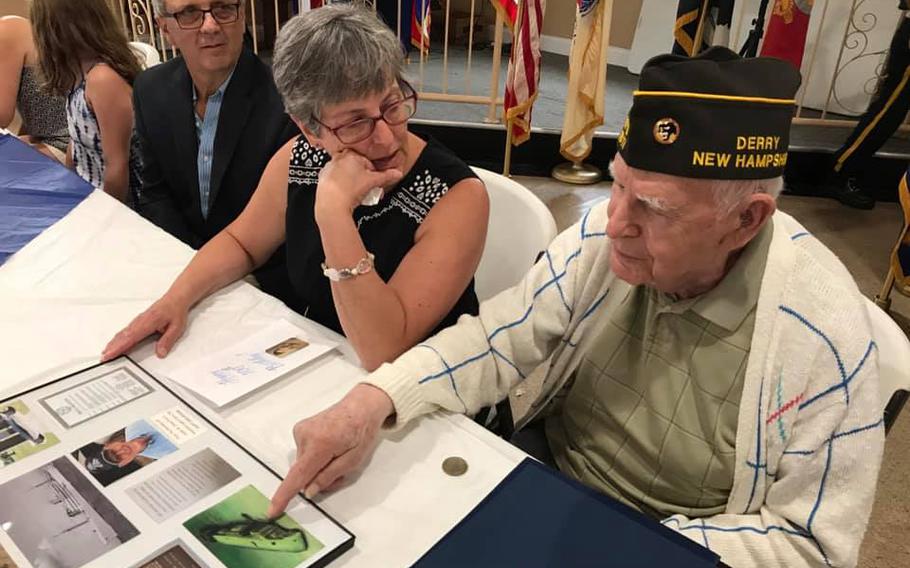