Wing Tuck Chin tried to enlist in his hometown of Columbus, Ohio, but was turned away when the recruiter said he was only looking for white recruits, according to Chin’s daughter Daphne Chin Croy.

That didn’t stop him.

“Undeterred, he went to Dayton, Ohio, and they said they had no such rule,” his daughter said. “And they took him.”

Chin enlisted in the Army Air Corps in 1942 hoping to fly fighter planes, his daughter said. He passed the test, though he didn’t yet have a high school diploma, and became a 1st lieutenant, flying C-47 transport planes.

He also trained pilots to fly B-52 bombers, saw time in Italy and rose to the rank of captain before his service ended, according to his family.

The 98-year-old veteran was one of several at the Fresno Veterans Memorial Museum on Saturday awarded a Congressional Gold Medal, the highest level of appreciation from the U.S. Congress.

About 40% of those who served were not U.S. citizens due to laws that denied citizenship to people of Chinese descent. Chinese Americans served in all branches of the armed forces and all theaters of the war, according to the U.S. Department of Veteran Affairs.

Asking a group of people who lived in segregated neighborhoods and faced racism to serve in the military was a tall order, according to Phil Cervantes, the Veterans of Foreign Wars vice commander of District 9.

“They faced racism. They were not welcomed,” he said. “That’s a fact.”

The 1882 Chinese Exclusion Act, which suspended Chinese immigration for 10 years, was still on the books until it was repealed midway through the war in 1943. Anti-Asian sentiment was a daily roadblock and reverberates today.

“It’s unfortunately what we see in America today with so many hate crimes and hate incidents that occur against our Asian population, that includes our Chinese Americans who fought valiantly for this country,” Fresno Mayor Jerry Dyer said.

Another medal recipient was Raymond Yuen Lee, who was born in San Francisco and moved to Fresno at 5 or 6 years old, he said. Lee enlisted in the Army in 1943 after he was turned down by the Air Force and Navy.

Lee said he had heard about the Japanese bombing of Pearl Harbor.

“I looked at my dad and said, ‘Where’s Pearl Harbor?’ ” he said. “We found out Pearl Harbor was in Hawaii. I said, ‘Man, looks like I have to go into the service.’ ”

After serving as a medic in the 97th Infantry Division, 322nd Medical Battalion, Company C, Lee left the service in 1946. He retired from the city of Fresno’s traffic division after 25 years.

Edward Sing Quan was in the Army from October 1944 to October 1946, transporting troops and supplies in diesel trucks in Korea. He later served as a mess sergeant and chief baker and left the Army to work as a butcher at Rex Meat Market in Fresno.

Seeing teenagers in the crowd was a good sight, she said, because the service of Chinese Americans is too often lost from history books.

Hansen Chin said he wasn’t sure he would qualify for the congressional medal, because he spent all of his time in the Army stateside.

He primarily processed records for troops as they returned from overseas, he said.

“No matter what you did, what your job was, was important and it served a purpose,” Chin said. “Just the service in the United States military, regardless, was an honor.” 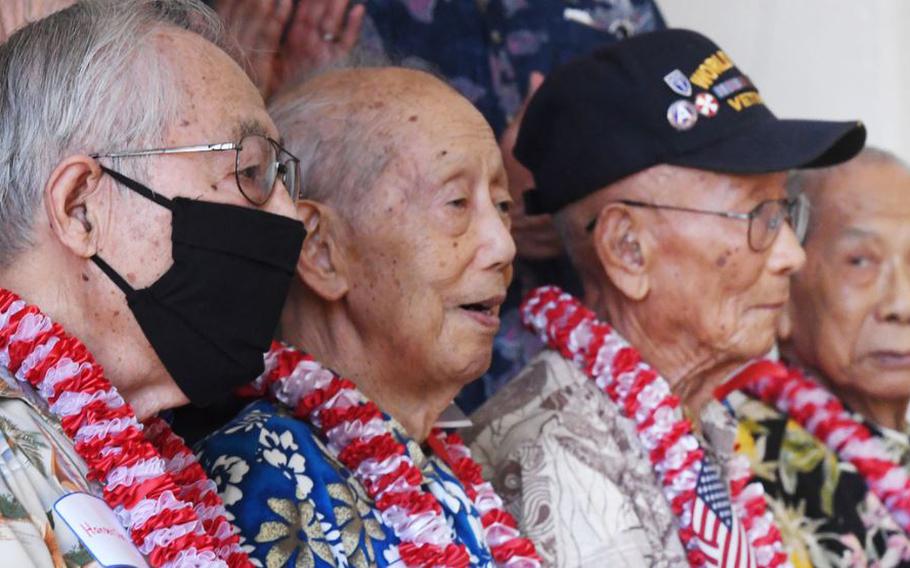