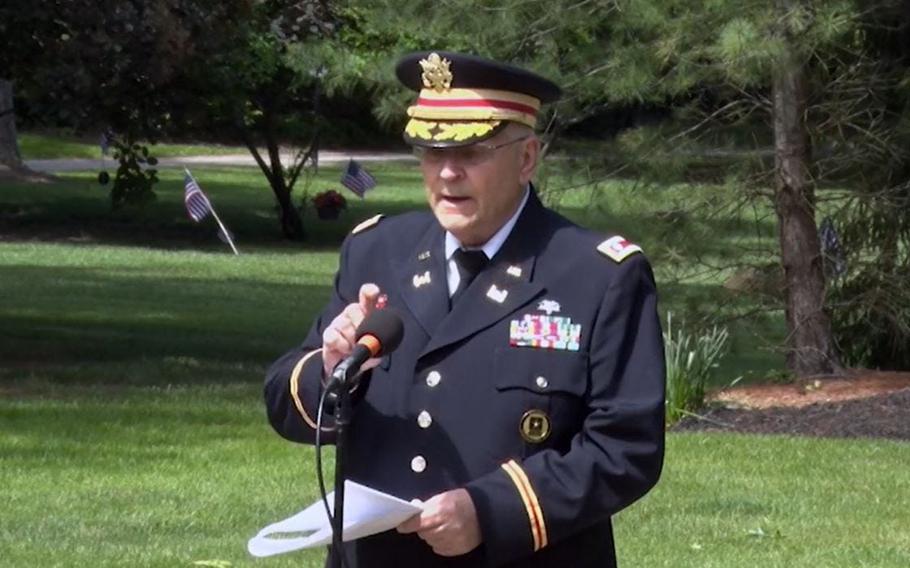 In this image captured from Hudson public access television, retired Army Lt. Col. Barnard Kemter checks to see if the microphone is functioning after organizers turned off audio during a portion of his Memorial Day speech Monday, May 31, in Hudson, Ohio. (HCTV)

HUDSON, Ohio (Tribune News Service) — What at first blush appeared to be a short audio malfunction at Monday’s Memorial Day ceremony in Markillie Cemetery turned out to be anything but.

The microphone was turned down for about two minutes in the middle of Kemter’s 11-minute speech during the event hosted by the Hudson American Legion Lee-Bishop Post 464.

Cindy Suchan, who chairs the Memorial Day Parade committee and is president of the Hudson American Legion Auxiliary, said it was either her or Jim Garrison, adjutant of American Legion Lee-Bishop Post 464, who turned down the audio. When pressed, she would not say who specifically did it.

Suchan said organizers wanted this part excluded because it “was not relevant to our program for the day,” and added the “theme of the day was honoring Hudson veterans.”

Kemter said he wanted to use his speech to share the history of the origin of Memorial Day.

Afterward, he noted, he received “numerous compliments” from attendees who told him “it was nice to hear the history.”

“It was well received,” Kemter said, adding many people told him, “I never knew that.”

He expressed disappointment with the event organizers’ actions.

“I find it interesting that [the American Legion] …would take it upon themselves to censor my speech and deny me my First Amendment right to [freedom of] speech,” Kemter said. “…This is not the same country I fought for.”

Organizers asked for portion of speech to be eliminated

In the days leading up to the ceremony, Suchan said she reviewed Kemter’s speech and asked him to remove certain portions.

“We asked him to modify his speech and he chose not to do that,” said Suchan.

Suchan declined to say which part she wanted excluded, but confirmed the two minutes when Kemter’s microphone was turned off were part of what she asked him to exclude. During those two minutes, Kemter is heard discussing how former slaves and freed Black men shortly after the Civil War exhumed the remains of more than 200 Union soldiers who died in battle in Charleston and gave them “a proper burial.”

About three days before the ceremony, Kemter said, he was emailed by an event organizer (whom he declined to name) asking him to remove a part of his speech dealing with Black Americans’ role in an early Memorial Day-type of ceremony. Kemter declined to share why the organizer asked him to remove this part, but said he asked the organizer to specify what portions they wanted to have excluded.

When he received an email back from the organizer Sunday evening, the message stated that the parts to be removed were highlighted. Kemter said he did not see any text highlighted — and with the ceremony less than 24 hours away, he did not reply again.

“I didn’t have time to sit down and rewrite another speech,” Kemter said.

Kemter said he showed the text of the speech to a Hudson public official, who advised him to leave the speech intact.

At a certain point in Kemter’s speech, Suchan said she asked A.J. Stokes, the event’s audio engineer, to turn off Kemter’s microphone. She said Stokes refused to do it himself, but pointed to the knob that controlled the microphone.

Stokes confirmed his refusal and that he did point to the knob. He said it was Garrison who turned down the audio and then turned it back up a short time later.

When reached by phone Wednesday, Garrison declined to say whether he turned down the microphone and said he had “nothing to add” regarding the situation.

Stokes said Suchan and Garrison were both “very adamant” about turning off Kemter’s microphone.

“That was very improper,” Stokes said. “I would’ve never done something like that.”

He said he was “very upset” about what happened and hoped he was not being blamed. Suchan said that Stokes was “totally blameless.”

He noted he’s handled the sound engineering for the event since the late 1960s and has his own company, Stokes Sound & Video Inc.

After the ceremony, Stokes said he apologized to Kemter about the loss in audio, but also told him “I had nothing to do with that. Cindy and Jim were the ones that turned your microphone off.”

When his microphone was turned down, Kemter said he thought there was a problem with the equipment. After the event, Stokes “told me it was not a malfunction.”

Kemter said he did not speak with Suchan or Garrison after the ceremony.

In the video of the program that appears on the HCTV website, Kemter’s microphone stops working in the middle of his speech. When Kemter notices members of the crowd saying that they can’t hear him, he taps the microphone, looks at someone off-camera and says “A.J., mic,” referring to Stokes.

Kemter looks at the crowd, smiles and explains that this was why he had asked attendees to move closer when he opened his speech. He continues speaking, and after about two minutes, the microphone comes back on and stays on for the remainder of the speech. The audio of what Kemter said can still be heard during the video because there was a shotgun microphone on HCTV’s video camera.

During the two minutes when the microphone was turned down, the recording of the program on HCTV includes a disclaimer stating “Lapse in sound not [the] fault of Stokes & Sound Inc. or Hudson Community TV.”