In Taps Across America, buglers nationwide joined forces to honor the fallen 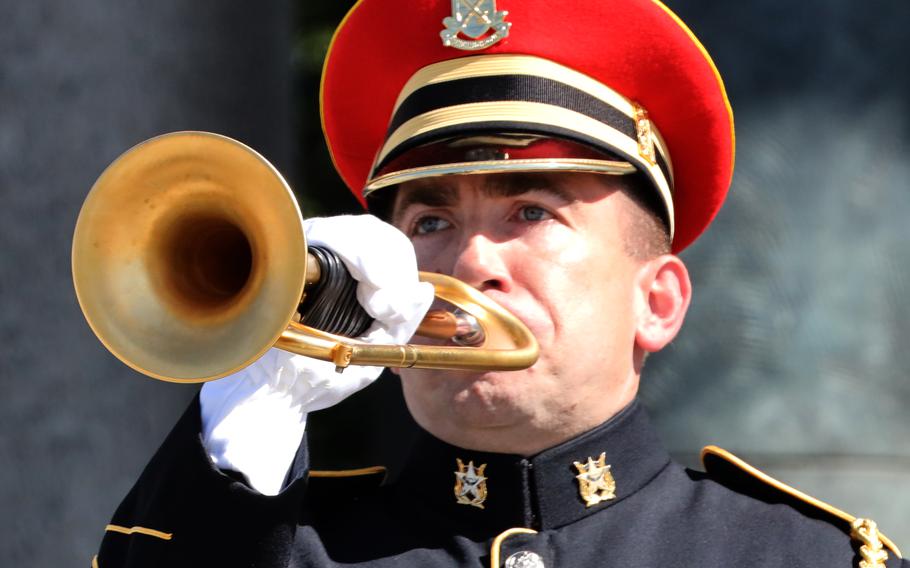 Buy Photo
The bugler at Monday’s Memorial Day ceremony at the National World War II Memorial in Washington, D.C. set the tome for musicians across the country who would take part in “Taps Across America" later in the day. (Stars and Stripes)

SHAVERTOWN, Pa. (Tribune News Service) — As he waited for 3 p.m. to arrive on Memorial Day, renowned trumpeter Bobby Baird said he has played "taps" more times than he cares to remember.

That's because Baird knows of the sacrifices of so many soldiers and he proudly sounds "Taps" every time to honor those brave men and women.

"When I was in the U.S. Navy Band, I played 'taps' at many funerals at Arlington National Cemetery following World War II," Baird said. "I'm honored to play it for our fallen heroes."

Baird, 91, participated in Monday's "Taps Across America" — the National Moment of Remembrance — that is held annually on Memorial Day and Americans are asked — wherever they are at 3 p.m. local time on Memorial Day — to pause for a duration of one minute to remember those who have died in military service to the United States.

The "Taps Across America" program asked veterans, musicians, teachers and students of all abilities and ages to sound "taps" on their front lawns, porches and driveways at 3 p.m. local time on Monday.

Baird played "taps" on his 80-year-old bugle that he first used when he was a Boy Scout in Kingston Troop #161 at Grace Episcopal Church.

Baird said more than 10,000 people participated in "Taps Across America," up from 4,300 last year. He said six buglers/trumpeters from six countries participated this year: all 50 U.S. states, Great Britain, Canada, Australia, Germany and Denmark. Ages of the buglers ranged from 11 to — yes, you guessed it — 91.

A letter from the "Taps for America" organization said this:

"For one brief moment, were all united in a common cause — to honor and remember."

Baird said Americans must never forget the sacrifices that veterans made for us — for our freedom — especially those who gave the ultimate sacrifice — their lives.

So as Americans everywhere gathered over the weekend for celebrations in backyards, parks and other venues, many paused at 3 p.m. on Memorial Day — Monday, May 31 — to remember our fallen heroes to thank them for what they did in service to our country and all Americans.

Baird stood on his front porch at 127 Shade Tree Road in Shavertown, with his wife, Pat, sitting nearby and with several neighbors standing in front of the house, as Baird played the somber song.

After Baird played "taps," he sat next to his wife and played several more patriotic songs, including "America the Beautiful," "God Bless America," and "My Country 'Tis of Thee."

The local legendary trumpet player, Baird was 18 when he took the stage with the U.S. Navy Band's Sextet at President Harry S. Truman's Inaugural Ball in 1949 — an experience he still recalls vividly.

Baird, who turned 91 on April 26, has been performing for 85 years, playing his first solo at age 5 for his grandfather, Arch Baird.

Baird was a three-time Pennsylvania state champion trumpeter and he earned a full music scholarship to Syracuse University. But he only attended for one year, and decided to travel to Washington D.C. where he auditioned for the United States Navy Band, and was accepted — becoming the youngest member of the band and he was named the trumpet soloist.

Baird still plays at church and for veterans gatherings and services.