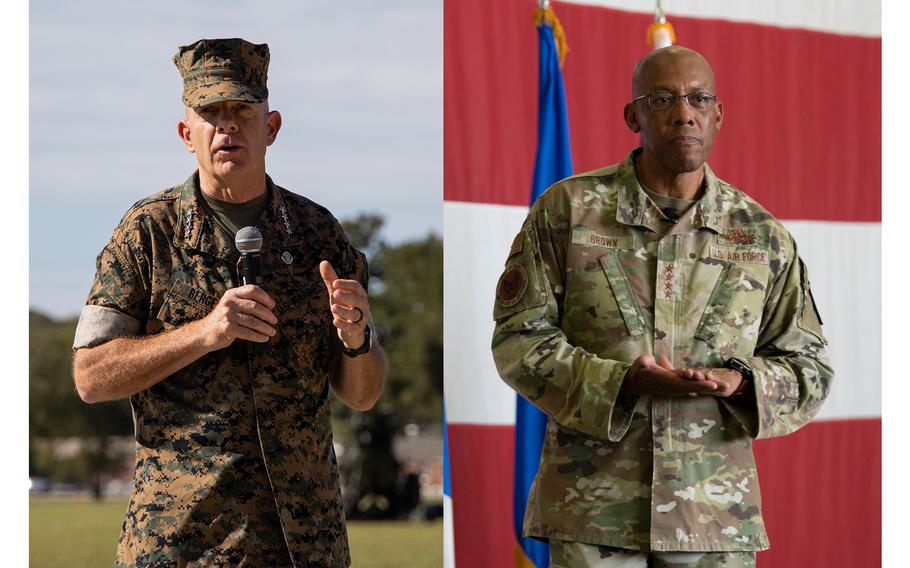 BRUSSELS — The Biden administration has launched its search to find the next chair of the Joint Chiefs of Staff, landing on the top generals in the Air Force and the Marine Corps as leading contenders, according to two people familiar with the matter.

Gen. Charles "CQ" Brown, chief of staff of the Air Force, and Gen. David H. Berger, commandant of the Marine Corps, will probably be interviewed by President Joe Biden before the commander in chief settles on whom he would like to replace Army Gen. Mark A. Milley, who has served as the Pentagon's top uniformed officer since fall 2019, these people said. They spoke on the condition of anonymity to discuss the administration's internal deliberations.

By law, Milley must rotate out of the position by the end of September. He is expected to retire.

It's possible that other candidates could emerge, the people familiar with the matter said, particularly from the Army. Anyone who has served as either a service chief or a combatant commander is eligible, opening the position to senior officers in roles such as the chiefs of U.S. Central Command, Indo-Pacific Command or U.S. European Command. One such candidate is Gen. Paul M. Nakasone, an Army officer who leads U.S. Cyber Command and the National Security Agency, these people said.

A Navy officer is unlikely to be considered, because the No. 2 job is filled by Adm. Christopher W. Grady, who is confirmed by the Senate to serve as vice chairman of the Joint Chiefs of Staff. Historically, the chair job has rotated between the military services, making an Army officer following Milley less likely. Biden's eventual nominee also must be confirmed by the Senate.

Spokespeople for the White House, the Pentagon and Milley declined to comment.

Whoever becomes the Pentagon's next top general will take over at a tumultuous time. The Defense Department, at Biden's direction, has committed about $25 billion in security assistance to help Ukraine fend off the bloody, nearly year-old invasion by Russia while turning its attention to an ascendant China and the fear that it could attempt an incursion of Taiwan.

Over the past few years, the military has repeatedly been dragged into partisan political squabbles in Washington as well, creating additional challenges for the Pentagon and raising alarm among scholars who study civil-military relations and want the military to be seen as apolitical.

News of the potential candidates to replace Milley was first reported by the Wall Street Journal as he continued a week-long tour of Europe. On Wednesday, he held a meeting with NATO defense chiefs here in Brussels, after meeting Tuesday just outside Ukraine in southeastern Poland with Gen. Valery Zaluzhny, the top officer in Ukraine's armed forces. Brown, 61, has served as the top officer in the Air Force since 2020, and previously was the commander of Pacific Air Forces. A fighter pilot, he also has led troops in the Middle East and Europe, and has called for the United States to speed up how quickly the military innovates.

Brown became the first Black person to lead a branch of service and would be the second Black chairman of the Joint Chiefs if selected, following Army Gen. Colin Powell.

While awaiting his confirmation to become Air Force chief of staff, he memorably released a video describing his experience as a Black man in the military after the police killing of George Floyd. He said in it that he was aware of the "immense expectations" that came with his historic promotion, "particularly through the lens of current events plaguing our nation."

Floyd's murder set off protests, some violent, across the country, including one in Washington for which Milley drew scrutiny for appearing in his camouflage uniform alongside President Donald Trump. Milley later apologized, and Brown was confirmed in the Senate by a vote of 98-0 four days after his video regarding Floyd.

Berger, 63, has served as the top Marine since July 2019. An infantry officer, he has commanded forces in Iraq, Afghanistan and the Pacific. He, too, has sought to innovate within his service, directing his commanders to break away from 20 years of insurgency wars in the Middle East, shed tanks and heavy artillery, and adopt more long-range missiles and drones for potential conflicts on Pacific islands. His vision for reshaping the Marines has faced objections, including from frustrated retired generals. Berger was confirmed by the Senate for his current job with a voice vote.

Milley's chairmanship has been defined by the crises of the Trump administration, the chaotic fall of Afghanistan and, more recently, his focus on helping the Ukrainian government. In recently released testimony to the House committee investigating the Jan. 6, 2021, attack on the U.S. Capitol, he told lawmakers that he knows he has become a "lightning rod for the politicization of the military," and expressed frustration with critics who have sought to "smear" him and other senior Pentagon leaders.

The general cited as one example the backlash he received after previously telling lawmakers that he wanted to "understand White rage" and what prompted people to assault the Capitol. His comment came in response to Republican criticism of leaders at the U.S. Military Academy who allowed cadets to learn about critical race theory, an academic framework that centers on the idea that racism is systemic and not just demonstrated by prejudiced people.

"I think it's fundamental to the health of the republic that we have an apolitical military," Milley said in his testimony. "And apolitical means nonpartisan, neither Democrat nor Republican, and we execute the lawful orders of the civilian leadership that's appointed over us. The key is 'lawful' orders, and therein lie some judgment calls."