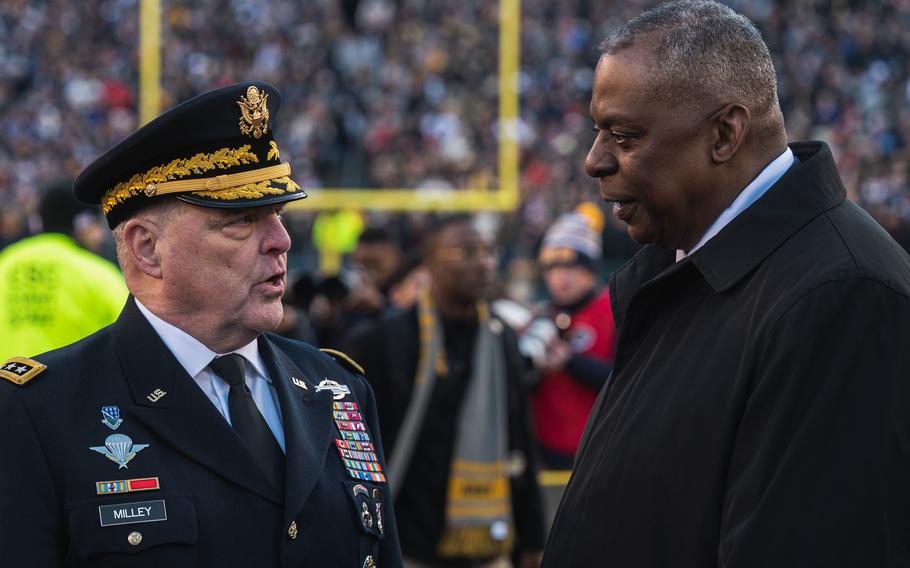 WASHINGTON — The Pentagon’s top general told congressional investigators scrutinizing the Jan. 6, 2021, attack on the U.S. Capitol that he has become a “lightning rod for the politicization of the military,” decrying critics who have sought to “smear” him and the Defense Department’s other senior leaders.

Gen. Mark Milley, chairman of the Joint Chiefs of Staff, offered the assessment during a remarkable portion of his discussion with the House select committee in November of that year. The panel in recent days released Milley’s interview transcript along with dozens of other documents as its work drew to a close.

He cited as one example the backlash he faced upon telling lawmakers in separate testimony months earlier that he wanted to “understand White rage,” a statement prompted by Republicans who had criticized leaders at the U.S. Military Academy for allowing cadets to learn about critical race theory. The academic framework centers on the concept that racism is systemic and not just exhibited by prejudiced people.

Milley told the Jan. 6 committee that he is “constantly strung out” along with Defense Secretary Lloyd Austin and other top officials the Pentagon. The military, he said, must avoid such fights.

“I think it’s fundamental to the health of the republic that we have an apolitical military,” Milley said in his testimony. “And apolitical means nonpartisan, neither Democrat nor Republican, and we execute the lawful orders of the civilian leadership that’s appointed over us. The key is ‘lawful’ orders, and therein lie some judgment calls.”

Milley addressed a range of issues during the Nov. 17, 2021, interview, including the Pentagon’s response to the Capitol riot, how senior defense officials navigated President Donald Trump’s tumultuous final year in office, and what Milley did to reassure U.S. allies and adversaries after Trump’s refusal to accept the election results culminated in an eruption of violence.

But it’s the general’s commentary on how the military has been pulled into partisan fights that is sure to touch a nerve, particularly as Republicans in the House prepare to scrutinize everything from the Biden administration’s chaotic withdrawal from Afghanistan to the military’s enforcement of coronavirus vaccine requirements.

A spokesman for Milley, Col. David Butler, said Tuesday that the chairman often consulted with Pentagon lawyers and former chairmen of the Joint Chiefs of Staff to handle his job to the best of his ability and stands by his testimony.

Milley, in his interview with the committee, expressed frustration with a number of events he saw challenging the military’s nonpartisan nature. Among the most significant occurred when retired Lt. Gen. Michael Flynn, Trump’s former national security adviser, suggested publicly that Trump could have ordered U.S. troops to re-run the presidential election.

“Michael Flynn and I are in two different places,” Milley told the committee, calling Flynn’s proposal “highly wrong.” He added, “The United States military has no role in domestic politics, period, full stop.”

Milley added that he knew Flynn in the military as a “high-quality intelligence officer who served his country honorably” and implied that Flynn, who was pardoned by Trump for lying to the FBI about his conversations with a Russian diplomat, has changed.

At one point in his interview, then-Rep. Elaine Luria (D.-Va.), a Navy veteran, asked Milley if he had ever considered whether Flynn should continue to receive his government retirement benefits after, she said, choosing to “not uphold his oath” to the U.S. Constitution.

Milley responded that the issue had been raised after a few retired senior officers criticized Trump in opinion pieces published by media outlets. Without identifying who broached the subject, Milley said that senior U.S. officials during the Trump administration wanted to know if they could be brought back to active duty and punished.

“You know, make him walk the plank sort of thing, right?” Milley said. “I advised them not to do that because that would further politicize, in my personal view.”

Milley said it also would be a “giant step” to bring Flynn back to active duty to court-martial him.

“I’m not saying it can’t be done or shouldn’t be done,” Milley said, according to the transcript. “I’m just saying that it would be a presidential decision. It would need to be rigorously thought out, with . . . all the costs and risks and benefits, not something that should be done lightly.”

The chairman said he had concerns about a number of things he heard in 2020, so much so that he questioned a Trump administration official who had been installed at the Pentagon, Kash Patel, as to whether he would be appointed in the closing weeks of the administration to a more senior position in the FBI or CIA. The exchange, Milley said, came while they were both in a luxury box at the annual Army-Navy football game.

“I said in perhaps a voice that was louder than maybe I should have . . . ‘So Kash, which one are you going to get, CIA or FBI?’” Milley recalled. “It was a moment in time, just a comment. . . . I’ve got a lot of faults and flaws, as we all do as human beings, and one of them sometimes is I probably make some remarks that can be interpreted as caustic, and perhaps that was one of those moments.”

The transcript highlights that Milley has worked through one of the most trying terms as chairman of the Joint Chiefs in years, said Peter Feaver, a Duke University professor who studies civil-military relations.

“When you’re evaluating him, you have to evaluate on the difficulty of the dive,” Feaver said. “You can’t say he kicked up splash, so he did poorly. He was forced to do a dive that was way more difficult than many other chairmen had to do.”

One of the reasons Milley has come into political crosshairs is that he spoke with several authors who wrote books about Trump, Feaver said.

“They don’t have a valid critique for what he did,” Feaver said of Milley’s critics. “But they’re on stronger ground to criticize that he talked about it.”