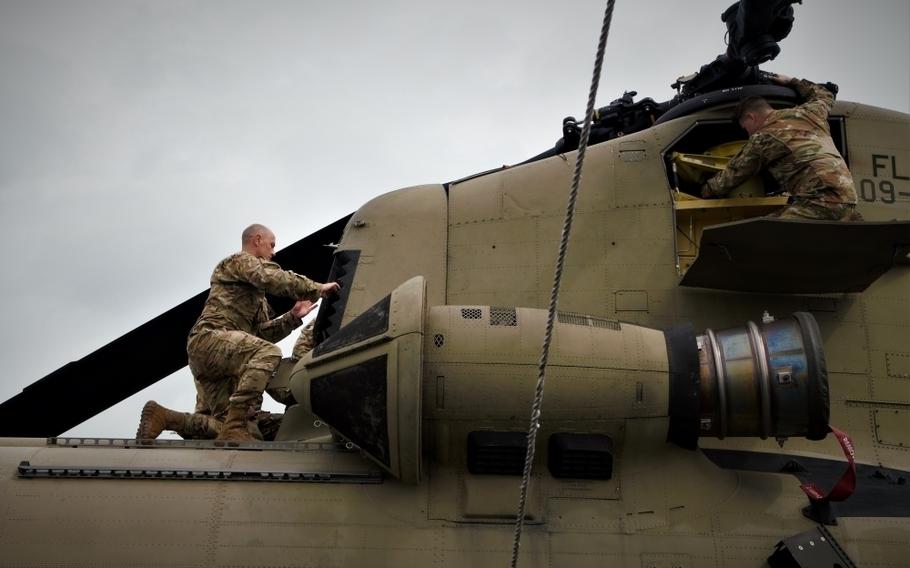 WASHINGTON — U.S. armed forces could increase troop safety, improve readiness and save money in the long term by swapping out paper hydraulic filters in military planes and helicopters for metal ones, according to some experts who have studied the equipment.

For decades, military aircraft have used paper hydraulic filters made with glass fiber or cellulose media. The purpose of the filters is to remove contamination particles from hydraulic fluid, which is the life blood of all planes and helicopters that allows pilots to move flight controls such as flaps, elevators and ailerons.

While the Pentagon generally has had no serious issues with the paper legacy filters, some experts say there is a safer and more efficient option — filters with stainless steel media that do a better job of cleaning the vital mechanical fluid.

The robust metal media filters, as they’re called, have been studied for decades and the Army began using them about 15 years ago. So far, data shows they have brought some benefits and improvements compared to the paper filters.

“It's incredibly successful,” said Matthew Boenker, president of Boenker Aerospace and a principal civilian engineer in the Army who helped persuade the service to begin using them.

Boenker said the Army began to move toward the metal filters after a CH-47 Chinook helicopter crashed in Texas in the late 1990s. Investigators later stressed to the Army and Boeing, the maker of the Chinooks, the importance of hydraulic fluid maintenance and its cleanliness in aircraft systems. About a decade later, the Army began shifting to the metal filters.

Since the switch, the metal filters in Army aircraft have helped to reduce component failures ten-fold, according to Army data. Further, Boenker said there was a dramatic drop in hydraulic pump failures — from almost 300 with the legacy filters to just 25 with the metal ones — during 36,000 flight hours in operation.

Jeffrey Mothersbaugh — an application engineer at the steel-wire manufacturing company Bekaert, which makes the media part of the metal filters — said the newer ones can be qualified for many vehicles, including planes, helicopters, nuclear submarines and ground vehicles.

Mothersbaugh said sometimes dirty paper filters can stay in an aircraft for years before the indicator finally pops up and alerts technicians that they need to be replaced. During that time, he said, contaminants and particulate matter can cycle around and around in the hydraulic system as they’re caught by the paper filter and re-released into the fluid when they’re dislodged by aerodynamic forces. The metal filters hold onto the particles better, Mothersbaugh said.

‘How clean is clean enough?’

While the Army has been using metal filters, the other branches are studying the differences to determine whether they should switch too.

When it comes to cost, the legacy filters are less expensive and typically go for less than $100. The metal varieties cost hundreds of dollars each. That means switching filters could save the military money over time, but the initial cost would be significantly higher with the robust filters.

Is it worth it? Experts in the other services are studying that question.

“We are envious of those results [in the Army],” said Robert Ware, a structural failure analyst with the Air Force Research Laboratory who has studied the issue. “We were a little bit skeptical and wanted to verify some of them independently.”

Ware said the Air Force recently conducted a side-by-side comparison of the paper and metal filters at an independent test house in North Carolina. That data, he said, would certainly be part of any discussion about changing filters in the Air Force.

“One of the last things you want to do is switch over lock, stock and barrel so quickly that you leave yourself vulnerable to new issues you didn’t know about,” he added.

“One of the big questions with [the hydraulic fluid] is, how clean is clean enough?” asked Matthew Bozzuto, a mechanical equipment and subsystems integrity program tech expert at the Air Force Life Cycle Management Center. “Because there’s a cost to it. There’s a cost to the filters, there’s a cost to qualifying components for aircraft to use them, the testing that’s involved.”

If the paper filters already clean hydraulic fluid to an acceptable level, is it worth the extra cost to move over to the metal filters?

“Cleaner is better, but there’s probably a point of diminishing return there somewhere,” Bozzuto said.

‘I hope things really get moving’

Nearing retirement after almost 40 years as a civilian engineer in the Army, Boenker suggested part of the reason why all the branches haven’t made the switch to metal filters could be economic. Maintenance in the military involves a lot of money and employs a lot of people, he said, so switching to a more reliable filter might make a large impact in that area. It’s an opinion that Ware said is probably true — at least to a small degree.

“Some of the depot commodity folks are trying to keep units on the shelf without necessarily going after the cause of why they came to the shelf in the first place,” he said. “They are rewarded for a certain metric that may not be … what’s best for the service, for the operator, for the taxpayer.”

“I don’t think it’s all just cynicism,” Bozzuto added. “If the benefits are there, [the metal filters] are going to be used. I think everybody is cautiously optimistic more than they are having their mind already made up.”

Another reason why the other branches haven’t switched might be because some key people in the decision-making process simply are unaware of the data. Making the change to metal filters would involve a lot of people and a lot of departments in the Navy, Marine Corps and Air Force.

Boenker said the Pentagon should revisit its filtration standard and officially recommend the metal filters in all vehicles where they make the greatest difference. The Pentagon’s filtration specification, for the most part, is “totally obsolete and worthless,” he said.

Mothersbaugh said he was hopeful that the Air Force’s comparison tests on both filters in North Carolina would make some progress on the issue.

“I hope things really get moving because of that, finally,” he said.