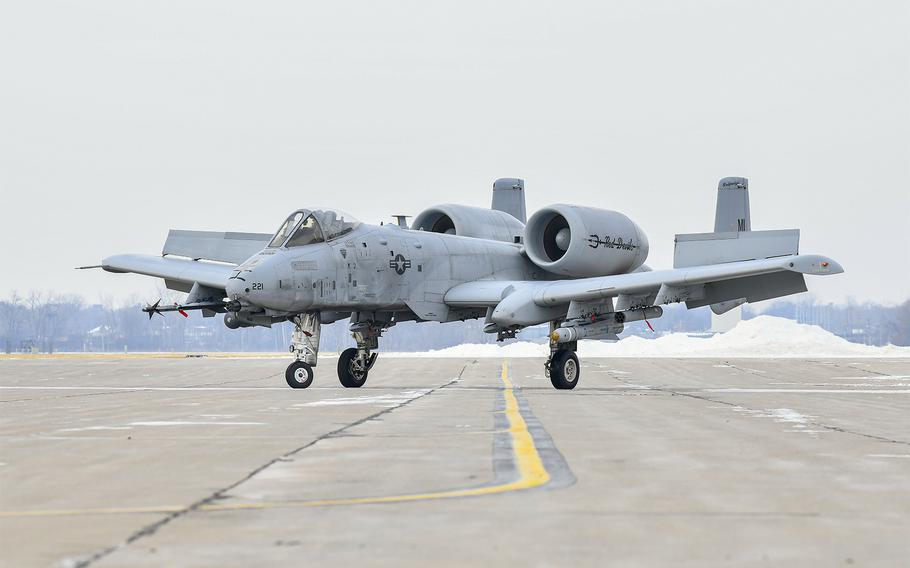 An A-10 Thunderbolt II flown by the 107th Fighter Squadron of the 127th Wing returns to Selfridge Air National Guard Base, Mich., after a training mission on Dec. 28, 2022. (Munnaf H. Joarder/U.S. Air National Guard)

WASHINGTON — The Pentagon needs to do a better job managing the risks of replacing aging fighter jets and should share information with Congress so it can make better spending decisions and avoid gaps in air superiority, a top federal watchdog concluded in a recent report.

Federal and independent analysts have determined some fixed-wing tactical attack aircraft are outliving their life spans and, in some cases, there aren’t planes to replace them yet, according to a study by the Government Accountability Office.

“Most of [the military’s] existing tactical aircraft first entered service in the 1970s and 1980s and have exceeded their original service lives,” the 49-page report states, noting the GAO did the study after Congress asked for a review of capability gaps and shortfalls with military attack planes.

“Tactical aircraft — fixed-wing fighter and attack planes — provide air-to-air, air-to-ground, and electronic warfare capabilities that are vital to combat operations and homeland defense,” according to the report. “Recent studies conducted by the Department of Defense's Joint Staff and the military services have found that [the Pentagon] needs to modernize its tactical aircraft fleet.”

The watchdog warned, however, the Pentagon risks spending valuable funds on duplicate or redundant efforts and leaving critical goals unmet, which could create a gap in tactical aerial capabilities.

The GAO analyzed several different military studies in two years, as well as budget and investment records for aircraft used by the Air Force, Navy and Marine Corps. It also studied the Pentagon’s decision-making process in funding newer aircraft.

“Seven of eight studies found that existing aircraft did not have the capabilities needed to compete in future combat scenarios,” the report said. “And some noted the need to invest in advanced technologies to address future needs. Three of the studies … identified shortfalls in the Navy's capacity, or inventory of tactical aircraft.”

The GAO report shows many of the military’s fixed-wing tactical aircraft are decades old. The agency said the Air Force’s fleet of A-10 Thunderbolts, for example, have an average age of 40.4 years. The A-10’s replacement is the relatively new F-35A. Similarly, F/A-18s flown by the Navy and Marine Corps have an average age of 28 years, and they will be replaced ultimately by the F-35’s B and C variants.

GAO analysts warned it’s particularly important for the military to balance older aircraft and development of new planes so it can “support the future force.” If it took a portfolio-type approach to study risks and costs, the agency said the Pentagon could make better decisions and keep aerial capabilities as close to full strength as possible.

“Divesting of existing tactical aircraft to pay for new development creates a delicate balance and is a decision that should be made with the most detailed information,” the report states. “Without an analysis of the tactical aircraft platform portfolio and a requirement to report underlying information externally, [the Pentagon] and Congress will continue to have limited information when making major investment decisions.”

Those investments are expected to be significant in the coming years. The GAO notes the Air Force and Navy are planning to spend more than $20 billion a year until 2027 to develop new planes to replace the older ones. During that same time, they plan to retire a “significant number” of existing aircraft, according to the report.

The GAO’s analysis ultimately boiled down to two recommendations. First, it urged the Pentagon to start doing integrated portfolio-level risk analyses to detect problems such as overlap, fiscal waste and capability gaps. The second recommendation asks to make it mandatory for the Pentagon to share those findings with the defense committees in Congress.

Acting Assistant Secretary of Defense Tanya Skeen wrote in a letter that the congressional sharing requirement would only give lawmakers preliminary data that’s not final. It would be better, she said, for the Pentagon to share relevant budgetary information with lawmakers via the National Defense Authorization Act, a law passed each year that outlines the military’s funding and expenditures.