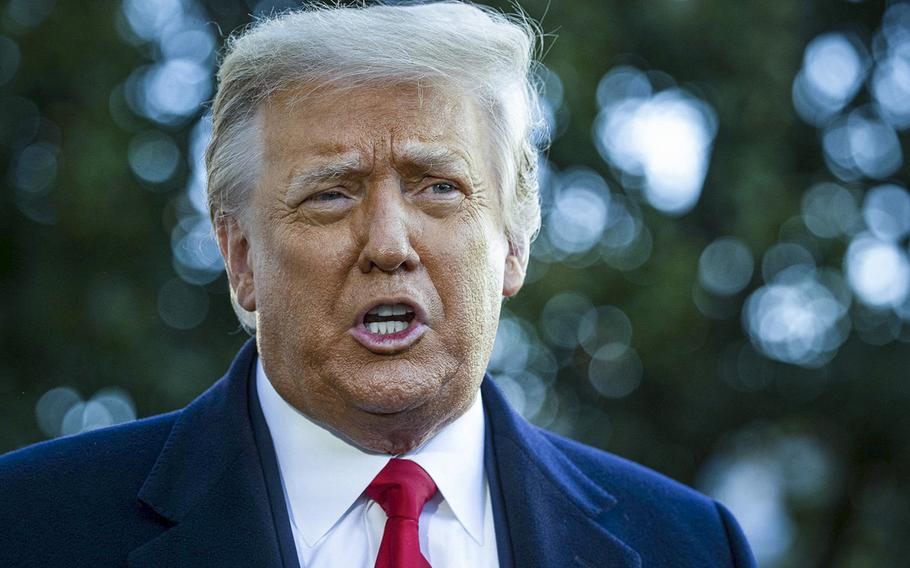 ATLANTA — An Atlanta-area grand jury investigating efforts by former president Donald Trump and his allies to overturn Trump's 2020 election loss in Georgia has concluded its investigation, according to the judge overseeing the panel.

Fulton County Superior Court Judge Robert McBurney issued a court order Monday morning saying the special grand jury had completed a final report on its investigation. He said the report was accepted by a majority of the county's judicial bench and that the 26-member panel was being officially dissolved.

The grand jury's recommendations were not made public, including whether criminal charges should be filed. McBurney scheduled a Jan. 24 hearing to determine whether to release the report. His order noted the grand jury had "voted to recommend that its report be published" and appeared to make its release "mandatory" — though the judge said he would hear "argument" on the issue.

"The Court thanks the grand jurors for their dedication, professionalism, and significant commitment of time and attention to this important matter. It was no small sacrifice to serve," McBurney wrote.

The special grand jury was investigating whether Trump and his allies violated Georgia law when they spread rumors about alleged election fraud in the state and pressured Georgia officials to undertake efforts that would change the results of the presidential election, which Trump lost by fewer than 12,000 votes.

Under Georgia law, special grand juries cannot issue indictments but can issue a report making recommendations. Fulton County District Attorney Fani T. Willis, who opened the investigation in January 2021, is expected to weigh those recommendations as she considers charges in the case.

Should Willis seek to file criminal charges, the district attorney would have to impanel a regular grand jury that considers criminal cases — a move that could precede any publication of the grand jury report.

A spokesman for Willis did not respond to a request for comment.

Willis began her investigation just days after a recording was made public of a January 2021 phone call Trump made to Raffensperger, the Georgia secretary of state. On that call, Trump urged Raffensperger to "find" enough votes to overturn his defeat in the state — one of several calls the former president and his allies made to Georgia officials as they sought to reverse the election results.

In the two years since, Willis has indicated publicly and in court filings that her office's sprawling investigation has expanded to include several other lines of inquiry including false claims of election fraud that Giuliani and other Trump associates made to Georgia state lawmakers; the group of 16 Republicans known as "fake electors" who signed certificates falsely claiming Trump had won the state; and threats and harassment against election workers.

At least 18 people have been notified they are targets of the investigation, including Giuliani, who was serving as Trump's lawyer at the time; and all the alternate Republican electors — a group that includes David Shafer, chairman of the Georgia Republican Party.

It remains unclear if Trump has been officially named a target of the Fulton County investigation. Willis' office has not said. Drew Findling, an Atlanta-based attorney who was retained by Trump last summer to represent him in the Georgia probe, did not respond to a request for comment.

Willis had indicated she might subpoena Trump — though it's unclear if she did. In recent months, her office successfully forced several Trump associates to appear before the grand jury, including Graham and former national security adviser Michael Flynn — both of whom waged lengthy legal battles to avoid testimony.

Willis also won a legal battle to secure testimony from former White House chief of staff Mark Meadows, who was ordered to appear before the grand jury in December — though it's unclear whether he did because the panel's proceedings were secret. (A spokesman for Meadows declined to comment, as did a spokesman for Willis.)

In recent weeks, those close to the case have anxiously awaited for news from the special grand jury. One of the few public hints that the grand jury was almost finished with its work came during a Florida court hearing over Flynn's testimony in late November when a deputy Fulton County district attorney told a judge that the number of witnesses remaining in the case was in "single digits."

Fulton County Superior Court approved Willis's request to impanel a grand jury last January. The panel was seated in May 2022 with subpoena power and began hearing from witnesses in June. While Willis's office helped present evidence before the grand jury, a source familiar with the jury's operations who declined to be named because the proceedings are secret said the 26-person panel — 23 jurors and three alternates — was deeply engaged in the investigation.

Jurors are believed to have been working on their final report for several weeks, even as testimony in the case came to a finish. While the jury was technically allowed to continue its work until May, Willis had long indicated she had hoped to wrap up the jury investigation by late 2022.

Monday's announcement that the grand jury had concluded and was dissolved now stirs up speculation about potential charges in the case. A source close to the Fulton County District Attorney's office said Willis is not bound by the grand jury's recommendations as she considers charges, which could even before the panel's report is made public.

Willis is expected to argue for the release of the grand jury report at the Jan. 24 hearing, where McBurney said in his order that he expects to also hear from members of the news media. But attorneys for targets of the investigation are also likely to ask to be heard, as they seek to redact any potential information about their clients in the case amid potential charges.

Trump and his allies have denied any wrongdoing, with the former president calling the Fulton County investigation "a political witchhunt." Others close to the case, speaking on background so as not to inflame Willis as she considers charges, have been critical of the district attorney's handling of the case, including her decision to speak publicly about potential charges even as the grand jury's proceedings, by its legal nature, are supposed to be secret.