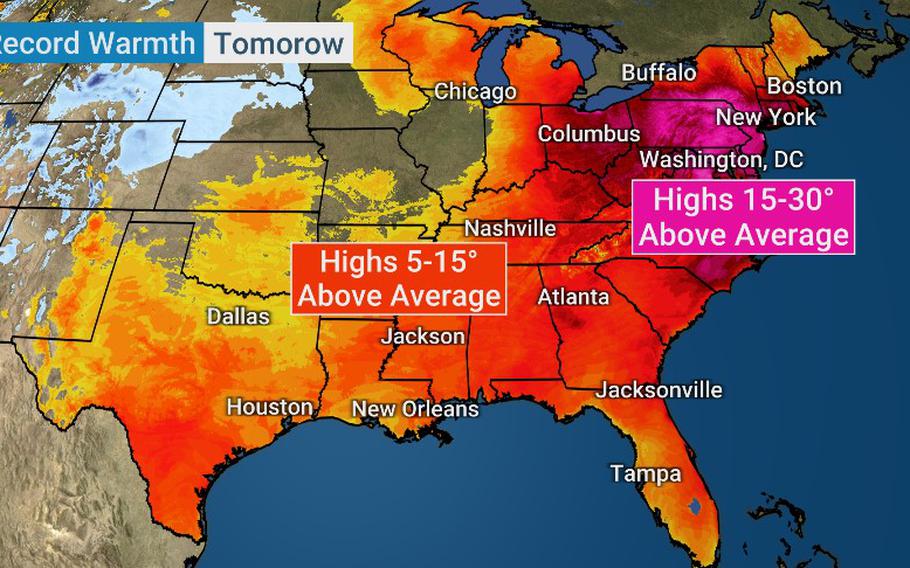 Less than two weeks removed from a Christmastime Arctic blast for the ages, much of the eastern United States has been bathing in record warmth to kick off January.

This warm spell gathered steam to begin the new year before intensifying and expanding eastward. Both Monday and Tuesday featured several dozen high temperature records, from the South and Gulf Coast to the Midwest and Northeast.

It’s the second pulse of springlike warmth during the past week. The first delivered numerous records to the Northeast and Florida over the weekend.

The current warm spell peaked Wednesday morning, with low temperatures at least 20 to 30 degrees above normal from Alabama to Michigan, extending east into the Mid-Atlantic. These low temperatures were close to the warmest on record for about 100 locations. While some locations just missed records, many posted their warmest Jan. 4 lows; a few even saw lows at or near record-warm levels for the entire month of January. Here is a partial list of the Jan. 4 record-warm lows (assuming these temperatures do not fall before midnight):

In addition to these record warm lows, many record highs were set Tuesday from the Ohio Valley to the Mid-Atlantic, including in:

Washington has hit at least 60 degrees on each of the first four days of January, for the first time on record.

This surge of winter warmth commenced Monday, with a focus on the South. A select list of Monday’s record highs includes:

The warmth in the East is a response to the stormy weather in California. The jet stream is taking a dip in the western United States, helping to bring precipitation systems ashore. Like a seesaw, when one part of the jet stream dips, the other side bulges northward, carrying warm air along with it.

The record temperatures in the eastern United States follow an exceptional burst of warmth in Europe that began on New Year’s Eve and has yet to fully relent. Leeming in central Britain matched its warmest January low on record Wednesday. That record was among thousands set in Europe since Saturday.

The concurrent warm spells in Europe and the eastern United States are further examples of how human-caused climate change is increasing the frequency of abnormally high temperatures. Although the pre-Christmas Arctic blast in the United States set record lows, the cold was not sustained, and statistics make clear that extreme warmth has become much more common.