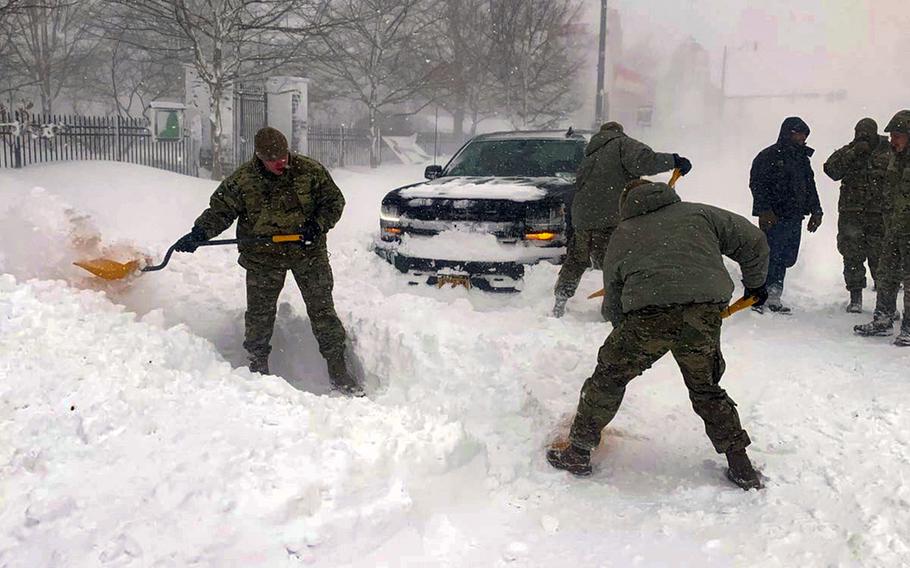 (Tribune News Service) — Members of the 107th Air Attack Wing of the New York Air National Guard stationed in Niagara Falls were recognized for the help they provided in the City of Buffalo during last weekend’s record-breaking blizzard.

On Friday, 18 members received commendation medals for their service during the period of Dec. 24 to Dec. 31, where they were assigned to Joint Task Force-5 during Operation December 2022 Winter Weather.

The service members completed more than 100 missions throughout the blizzard, including transporting more than 99 emergency personnel to hospitals, conducting 30 welfare checks, transporting patients in dire need of care to hospitals, assisting the fatality search and recovery team, assisting residents with snow removal, and delivering pallets of water and ready-to-eat meals.

Major General Raymond Shields, the commander of the New York Army National Guard, said when the emergency first started, they had to make their way from the Niagara Falls Air Reserve Station to Buffalo and faced the same treacherous weather affecting those citizens. He also spoke with Gov. Kathy Hochul the day after Christmas, showing appreciation for what the Air National Guard did during the storm.

“I can’t thank you all enough for coming in and helping our fellow citizens over a holiday weekend,” Shields said when addressing the medal recipients.

Airman First Class Seth Librock explained the the unit rolled out to the city on Saturday morning with the weather conditions forcing them take a long time to get there. He was part of a team that stopped to figure out if everybody was okay, prioritizing the children and elderly, and bringing those that were not to the nearest safe location, like a police or fire station. Some children were picked up who did not have a warm place to be with their parents.

“It’s not my first one, but this was definitely the worst I’ve been on,” Librock said, “doing the most help for people for sure.”

Staff Sergeant Colin King was part of a group that transported a pregnant woman from Kenmore Mercy to O’Shei Children’s Hospital on Christmas Eve, where she would later deliver her child.

“It was pretty cool to get out there and help police and fire (departments), because a lot of the times, they weren’t able to,” King said.

Staff Sergeant Kevin Au, himself a Buffalo native, said it was hectic at first, but their training teaches them to remain calm and how to address problems. Along with helping get stuck vehicles moving, getting people to safe places and reuniting loved ones, his group transported a man with an artificial heart to a hospital in order to get it recharged due to power outages.

“If we hadn’t been able to get there, I’m not sure if he could have found anywhere else to get it taken care of,” Au said.

Au added that it meant a lot to him having this experience serving his community. He had previously been deployed in responses to floods and the November snowstorms just before Thanksgiving, with each response has had its own unique challenges over his 11-year career.

“ Buffalo is the city of good neighbors for a reason,” Au said. “When times are tough, it doesn’t matter if you’re military or first responder, everyone pitches in as they can to help out.”