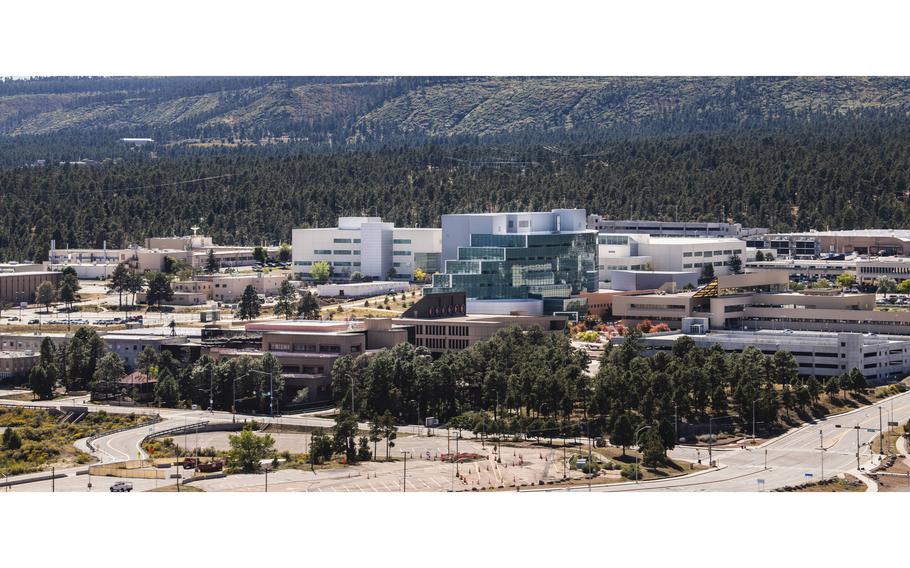 (Tribune News Service) — Los Alamos National Laboratory's record $4.6 billion budget for this fiscal year will give officials an unprecedented amount of money for its nuclear weapons program, which still makes up the bulk of the lab's spending.

The lab's hefty funding was part of the U.S. Energy Department's budget request tucked into the recently passed $1.7 trillion omnibus spending package, which will cover the costs of agencies and programs through this fiscal year, ending in October.

Roughly 70 percent of the lab's funding is for its nuclear weapons program, which includes research, computer testing and pursuing the goal of producing 30 plutonium bomb cores or "pits" per year by 2026.

Plans call for Savannah River Site in South Carolina to make an additional 50 pits by 2035. The combined 80-pit goal was established under the Trump administration and is being carried forth by President Joe Biden.

Pentagon leaders, nuclear security officials and some politicians say the pits are needed to modernize the arsenal so it will act as a stronger deterrent against Russia, China and rogue states, which are improving their first-strike capabilities. The pits also would be fashioned to fit at least one new warhead being developed.

The war in Ukraine and Russian President Vladimir Putin's threats to unleash nuclear weapons if any country directly intervened in the conflict have heightened tensions and led to the military establishment pushing harder to bolster the arsenal through increased spending.

This year's $858 billion military budget is the largest in memory. And the National Nuclear Security Administration, the Energy Department branch that oversees nuclear weapons, received $22.3 billion, a bump from the $20.7 billion it got last year.

In an email, Shayela Hassan, a nuclear security agency spokeswoman, wrote the budget increase is necessary to fund the program in the current times.

"This is the most demanding moment in the history of our nation's nuclear enterprise since the Manhattan Project," Hassan wrote.

Modernizing nuclear programs requires revitalizing production, as described in the Nuclear Posture Review, she wrote, referring to the guidebook that every presidential administration crafts for managing the arsenal and assessing global threats.

About $1.6 billion of the lab's new budget is to modernize plutonium operations to prepare for manufacturing 30 pits, an amount that almost triples the most pits the lab has ever produced in a year.

The plutonium funding is a 60 percent increase from last year's $1 billion, and about five times the $308 million budgeted three years ago.

In an email, a watchdog group called the lab's ballooning nuclear weapons budget "a staggering amount of money" that was leveraged through world events, such as the war in Ukraine.

"I think the writing should be on the wall that we have entered a new nuclear arms race," wrote Geoff Wilson, director of the Center for Defense Information at the Project on Government Oversight. "The nuclear spending floodgates have opened in the name of defending against China and a belligerent Russia, and the labs are defense contractors. This is going to be a boom season for them."

Producing new pits lays the groundwork to create new warheads, Wilson wrote. He noted the lab is developing the first new warhead since the 1980s, the submarine-launched W93.

What's worrisome about devising new warheads is the computer simulations now used for testing might be rendered obsolete, leading to explosive nuclear testing — banned since 1992 — being revived, he wrote.

The U.S. has the most powerful arsenal in the world and stands little chance of falling behind adversaries, but amping up its weaponry could drive other countries to do likewise, creating a destabilizing effect globally, Wilson wrote.

"I think everyone should be concerned where this sort of escalation could take us, and whether or not this is really necessary for our security, or just going to fund the defense contractor industry base," he wrote.

New Mexico's delegates, including Sen. Ben Ray Luján, have expressed enthusiastic support of the lab and funding its nuclear mission, contending it's essential for national security and boosts the regional economy.

Luján's office didn't respond to a request for comment on the lab's growing budget.

The lab's economic benefits have been debated in recent years, especially for Los Alamos County. While the lab's workforce has grown to almost 16,000 employees, an estimated 65 percent live outside Los Alamos.

Supporters point to the lab funding a diverse assortment of nonweapons science, such as a new method to detect methane pollution, more effective ways to combat deadly viruses and a joint effort to develop the Supercam mounted on the Mars rover.

But the nonweapons programs are a lesser part of the lab's budget. In several public town halls, lab Director Thom Mason has said the nuclear mission is the primary focus.

One longtime anti-nuclear activist said the race to produce pits at the lab has proved to be more costly and difficult than was initially imagined.

In 2017, the nuclear security agency estimated it would cost about $2 billion total to ramp up pit production, and the costs have already grown to many times that amount, said Greg Mello, executive director of the Los Alamos Study Group.

Mello called the endeavor "a runaway train" that's unsustainable in the long run and unnecessary.

"It's a product of successful lobbying," Mello said. "We don't need new generations of nuclear weapons."