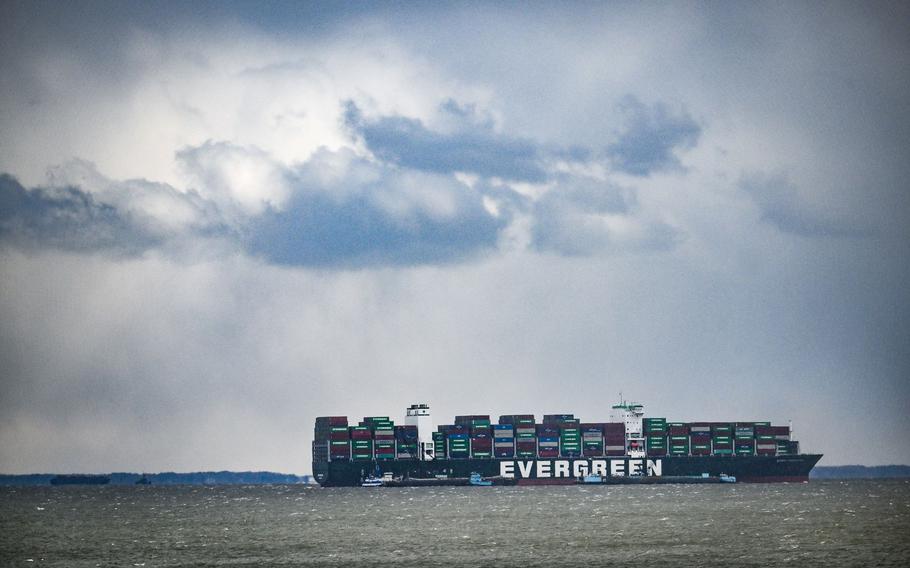 Dredges work to free the grounded Ever Forward container ship after it ran aground outside the shipping channel in March 2022. The owner of the Ever Forward will pay Maryland more than half a million dollars to enhance local oyster bars as a penalty for the accident. (Jerry Jackson, Baltimore Sun/TNS)

(Tribune News Service) — The owner of the Ever Forward container ship, which ran aground in the Chesapeake Bay in March, will pay Maryland more than half a million dollars to enhance local oyster bars as a mitigation fee for the accident, following a Wednesday morning vote from Maryland’s Board of Public Works.

After the grounding, Maryland issued an emergency wetlands license that allowed for dredging the shallow bottom around the vessel to re-float it. After several attempts — and the removal of about 500 cargo containers — the Ever Forward was freed April 17.

Wednesday’s vote by the Maryland board — which includes the governor, comptroller and state treasurer — tacks on a $676,200 payment to that license, which will go toward enhancing and reseeding 41 acres of oyster bars to mitigate for the grounding. Because the grounding occurred in Anne Arundel County, oyster bars there will be prioritized by the Maryland Department of Natural Resources.

The ship’s Taiwanese owner, Evergreen Marine Corp., issued a statement: “After the incident of Ever Forward’s grounding off the Port of Baltimore, Evergreen has been closely working with concerned authorities in an effort to evaluate and mitigate the impact of the refloating operation on the surrounding area.

“Earlier this week, the Maryland Board of Public Works approved an environmental remediation agreement between the State of Maryland and Evergreen that will establish a fund to provide environmental support to Chesapeake Bay and bolster the health of oyster beds in the area. Contrary to some recent press accounts, the agreement to fund this effort is not due to any sort of fine levied against Evergreen.”

The Ever Forward’s grounding and dredging impacted 14 acres of bay bottom, including 11.5 acres within the boundary of a natural oyster bar, the Maryland Department of the Environment said in a news release.

The impacted bar wasn’t very populated to begin with, according to a survey by the Department of Natural Resources, so there were “no discernable impacts” on oysters, aside from the “deep footprint of the ship and dredging.”

But the area was a favored habitat for blue crabs during the winter months, when the creatures burrow into the muddy bottom to protect themselves from the cold.

The grounding and subsequent efforts to free the Ever Forward impacted an estimated 423 crabs, or about 5 bushels, according to DNR’s survey.

Given that the average baywide harvest of blue crabs is 1.3 million bushels annually, the grounding’s impact on the crab population is “very small,” the survey said. But, the grounding could redistribute crabs to other locations for their “overwintering.”

That could impact local harvesters, because the location beside the Craighill Channel is known to be a productive area for crabbing in the springtime when the crabs emerge from the mud, according to the survey. Exacerbating matters, 2022 was already a year with a very low blue crab population, when crabs appeared to be favoring the northern bay, the survey stated.

In a report last month, the U.S. Coast Guard stated that the Ever Forward’s bay pilot had spent half of the vessel’s two-hour voyage on phone calls, and sent a few text messages and drafted an email before the grounding. The state has since suspended the license of the pilot, Steven Germac, and the Coast Guard report warned he could face civil penalty action for his conduct.

Currently, the Maryland Board of Pilots, which licenses and regulates the pilots using the Port of Baltimore, doesn’t have a cellphone policy but is expected to consider the matter at its next meeting Friday.