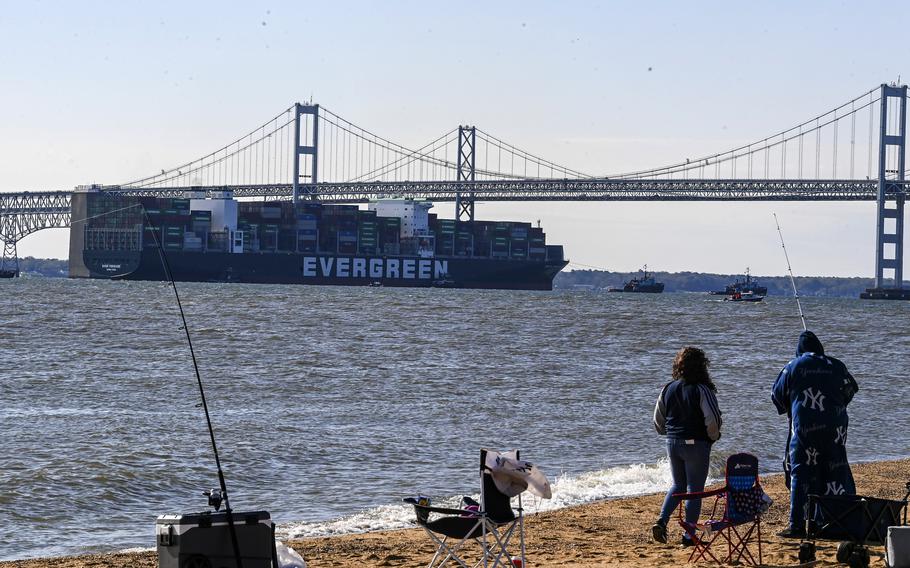 The container ship Ever Forward was finally freed Sunday morning just after 7 a.m. near Pasadena, Md., and was towed under the Chesapeake Bay Bridge. Crews unloaded 500 containers in an effort to lighten the load. (Jonathan Newton/)

Finally, the dark green ship was moving. One knot, then 2 knots, then 2½. The Ever Forward was at last chugging forward, freed on Sunday from its month-plus detention in the mudbanks of the Chesapeake Bay, where the gargantuan cargo vessel — nearly the length of the Empire State Building — had become a tourist site along the shoreline and nearby Maryland parks.

The 1,095-foot container ship, which is owned by the Taiwan-based Evergreen Marine Corp. and went aground March 13, was dislodged shortly after 7 a.m. on Sunday. Unlike its sister ship the Ever Given — which is chartered by the same Taiwanese company and got stuck last year in the Suez Canal, triggering a global commerce crisis — the Ever Forward was, in comparison, a nuisance. Its grounding slowed water traffic and posed potential environmental problems to the sensitive bay area.

But mostly, the Ever Forward, whose itinerary was a simple hop from Baltimore to Norfolk, provoked wonder and a little bit of consternation: How on earth did the pilot or captain stray out of the approximately 50-foot-deep channel and into waters half that depth? And: How were they going to get this thing out of here?

An investigation into the accident is still ongoing, according to Coast Guard spokeswoman Breanna Centeno and Chris James, the director of response operations for Witt O’Brien’s, a Houston-based firm hired by Evergreen Marine to represent the company’s vessels in the United States.

On Sunday morning, James woke up early and drove into Downs Park, in Pasadena, Md., right when it opened at 7 a.m., and headed to the south overlook, where he lifted his binoculars and gazed at the big ship.

There were no fireworks, no hearty handshakes for a job well done, no lighting of cigars. From the shoreline, about two miles from the Ever Forward’s position, the vessel’s initial burst of movements could barely be ascertained. But people squinted and bent forward, doing their best to spy something, anything.

James and two other men from the Marine Spill Response Corp. — on hand in case things really went south and the vessel started leaking fuel — quietly smiled and stood along the beach behind a yellow caution tape.

One local man, a NASA aerospace engineer, was clutching his phone, which was equipped with an app monitoring marine frequencies. He could hear officials talking about the Ever Forward’s speed.

“How often do you get to witness something like this?” asked Chris Stevens, 60, the NASA engineer, who drove to Downs Park from his Annapolis home. “Oh! We got smoke! The engine’s fired up!”

Meanwhile, James — technically known as one of three “incident commanders” for this operation — was busy texting and making calls. He said that an enormous network of experts was essential to free such a ship, some skilled at tugging, others at dredging, and many more in math and engineering.

By Sunday morning, James said, this mammoth team — composed of entities and people such as the Coast Guard, the state of Maryland’s environment department, naval engineers in London, and the crews operating the tugboats — was hopeful that this was the morning for the Ever Forward’s prison break. The tide was high, giving them an extra foot of depth. Not much, James conceded, but anything helped.

But more important, much of the tedious work to lighten its load had finally been completed the night before. The ship had been carrying about 4,900 containers before it was grounded. Since then, crews had been hoisting some of them off. On Saturday night, they took off a 500th container, which was loaded onto a barge and taken to Baltimore, where it was stored with the rest of the removed containers for safekeeping.

This, for the record, was no small feat. The “big brain people,” as James said, had to figure out which containers — based largely on their locations on the vessel — they could remove and when.

“The ship could have tipped or flexed, and they had to make sure to take off the right containers so that the forces pushing the ship to the ground were evenly distributed,” James said. “We had to protect its stability, and the hull.”

There was more — way more. They had to deepen the position where the Ever Forward was stuck by about 20 feet. So, crews hauled out huge cranes outfitted with buckets, which then swooped down into the bay floor, collecting loads of dirt, sand, clay and mud. The deeper waters made it easier for boats — two on the bow, one on the stern and two on the port side — to pull the Ever Forward back into the shipping channel.

After it was freed, the Ever Forward had a new but much easier challenge: Without all those containers — each weighing an average of about 15 tons, or 14,000 kilograms — the ship was now too tall to pass underneath the Bay Bridge, just south of where it had been stuck. Quickly, though, it took on a sizable volume of ballast water from the bay to sink it lower into the channel. Shortly afterward, the Ever Forward made it past the bridge.

By 10:15 a.m., the Ever Forward anchored so that it could complete a “survey,” or inspection, by a group of maritime experts hired by the company, according to James. Although divers had already determined that the propeller, rudder and various portions of the hull had not been damaged, the ship still needed to make a formal pit stop for a more intense round of scrutiny. Once the Coast Guard signs off on this inspection — expected to be finished by Monday — the ship is free to carry on, James said.

Back at Downs Park, a group of container ship tourists straggled onto the shore, looking a bit beleaguered. They missed the moment it was freed. But in the end, Bob Evans, 67, and his wife, Gloria Evans, were just relieved the Ever Forward was gone. The Glen Burnie couple come to the park most weekends, and they were deeply worried about the ship potentially spilling fuel.

Now, Bob said, they could just enjoy their walks and focus on the wildlife.

“We have a pair of nesting eagles on that tree over there,” Evans said. Then he motioned his hand toward the shoreline, past the yellow caution tape. “And, oh, there’s always a pair of ospreys on that pylon.”