How to free a 1,000-foot cargo ship stuck in the Chesapeake Bay? Coast Guard weighs options. 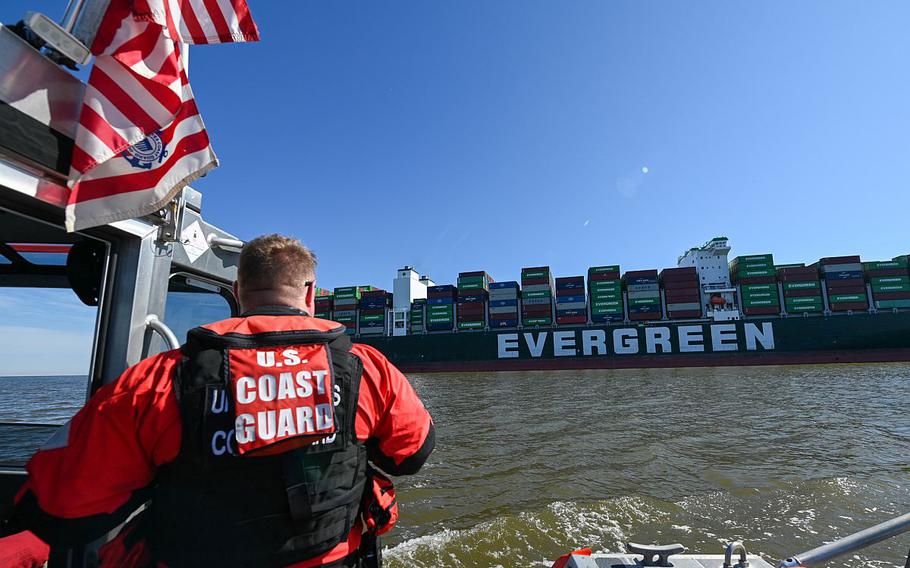 The Coast Guard continues to respond Tuesday to the grounding of the 1,095-foot container ship Ever Forward, which grounded Sunday night in the Chesapeake Bay near Craighill Channel. (Kimberly Reaves/U.S. Coast Guard)

(Tribune News Service) — The U.S. Coast Guard is formulating a “very detailed” assessment before a Norfolk, Va.-bound cargo ship stuck in the Chesapeake Bay can be refloated, a spokesperson said Tuesday.

There’s no exact timeline to free the 1,000-ft. ship, called the Ever Forward, according to Petty Officer Steve Lehmann, a Coast Guard spokesperson. The ship ran aground in 24-foot-deep waters off the coast of Maryland Sunday night after leaving the Port of Baltimore’s Seagirt Marine Terminal. It was set to arrive in Norfolk Thursday, according to MarineTraffic.com.

If the ship’s name ― or situation ― sounds familiar, that’s because it is.

The 117,000-ton vessel is part of a fleet of cargo ships owned by Evergreen Marine Corp. — a Taiwan-based company that also owns the Ever Given. The skyscraper-length container ship became wedged in the Suez Canal almost exactly a year ago, inspiring a flood of internet memes and blocking billions of dollars a day in maritime commerce, the Associated Press reported.

A flotilla of tugboats freed the Ever Given after six days.

The cause for Ever Forward’s running aground is unclear, according to Lehmann. The ship is located just off Gibson Island near the Craighill channel.

Unlike the Ever Given — which halted traffic in both directions — the Ever Forward is not blocking other ships from reaching the Port of Baltimore, according to William P. Doyle, executive director of the Maryland Port Administration.

“Business and commerce related activities at the Port of Baltimore continue as normal,” Doyle said in a Tuesday statement.

Efforts are underway to craft a plan to refloat the vessel. But before that can happen, the Coast Guard needs to complete an assessment of the situation, Lehmann said.

“Then we take that and that gets put into a plan by the captain of the vessel,” Lehmann said.

No injuries or oil spills have been reported on the Ever Forward, Doyle said.

Still, Doug Myers, Maryland senior scientist at the Chesapeake Bay Foundation, is concerned the refloating process could damage the hull — and cause a leak — without preemptive efforts.

“You don’t wait until the ship breaks up and spills oil to start responding to it,” Myers said.

A contaminant boom has not been placed around the vessel, said Petty Officer Breanna Centeno, a Coast Guard spokesperson. Coast Guard crews are conducting regular soundings to check fuel levels and ensure no leaks are happening.

Still, the Coast Guard plans to inspect the vessel again.

“We just want to make doubly sure,” Lehmann said. “Our main priority here is the safety of those aboard.”