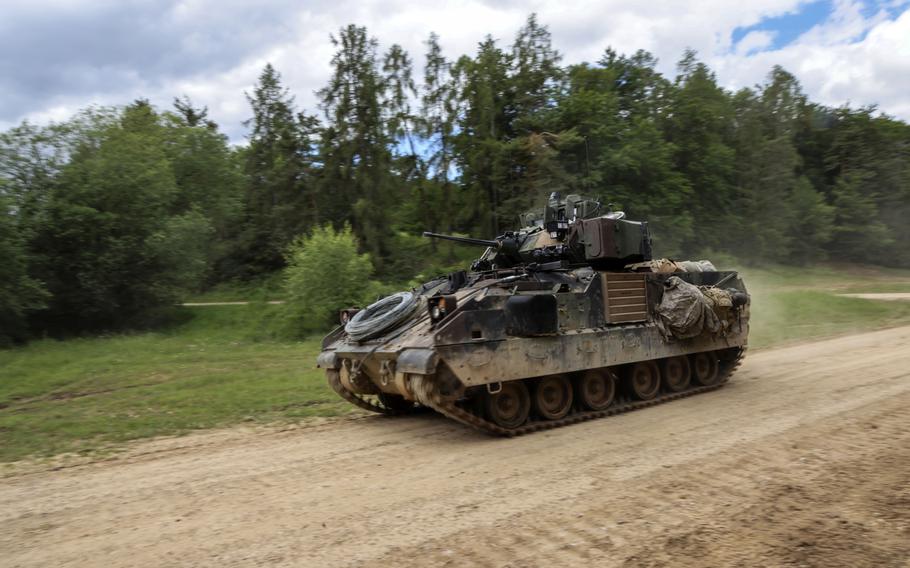 The U.S. government is considering sending Bradley Fighting Vehicles to Ukraine as part of a further package of military support, according to people familiar with the matter.

A final decision hasn't yet been made, one of the people said. When the vehicles would be operational is also unclear, said the people, who spoke on the condition of anonymity to discuss the sensitive issue.

The White House didn't immediately respond to a request for comment.

Kyiv has been asking allies for tanks, longer-range missiles, armor and air defense systems, with Russia's war now in its 11th month. Fighting continues on the ground in the east even as the onset of winter slows advances by either side, leaving Moscow resorting to missile strikes against the country's energy and civilian infrastructure. Russia launched dozens of cruise missiles on Ukrainian cities on Thursday in one of its heaviest barrages of the war, though Ukraine said it shot down most of them.

Ukrainian officials have warned that Russia might be gearing up for a fresh offensive in the spring. Equally, the warmer weather might allow Kyiv's forces to again press the advantage, having pushed Russian forces back out of areas they occupied in the early days of the war.

Still, some of Ukraine's allies have been reluctant to send Kyiv all of the more advanced weapons it has been asking for, out of concern it could prompt Moscow to escalate further, or potentially draw other countries into the conflict more directly.

"Bradleys would provide a major increase in ground combat capability because it is, in effect, a light tank," said Mark Cancian, a former White House defense budget analyst who's now with the Center for Strategic and International Studies. "Unlike the previously provided M113s, the Bradley is heavily armed with a powerful 25mm gun and TOW anti-tank missiles. The United States has many Bradleys, though some are older and need upgrades, so inventories are not a problem."

Cancian added it would be months before Ukraine could field them because crews and maintainers would need to be trained on the vehicles, which are built by BAE Systems.

The U.S. also has announced plans to send a Patriot missile battery to Ukraine. But it's also unlikely to be ready to use before the spring, due to the time it takes to train Ukrainian troops on the system, the people said.

Michael Allen, who held national security policy roles during the presidency of George W. Bush, said providing Ukraine with the fighting vehicles would be "significant because most experts are forecasting that the war will be more like Kherson than Kharkiv, that is to say more grinding and incremental than a break through a weak line and recapturing hundreds of square miles."

"Bradley is fast and maneuverable and suits our political objectives to give the Ukrainians weapons to hasten the end of the war," according to Allen, who is now managing director of Beacon Global Strategies, an advisory firm. "Also, Ukraine is desperate for armor generally."