Captured Russian tanks and equipment are coveted trophies — and a headache 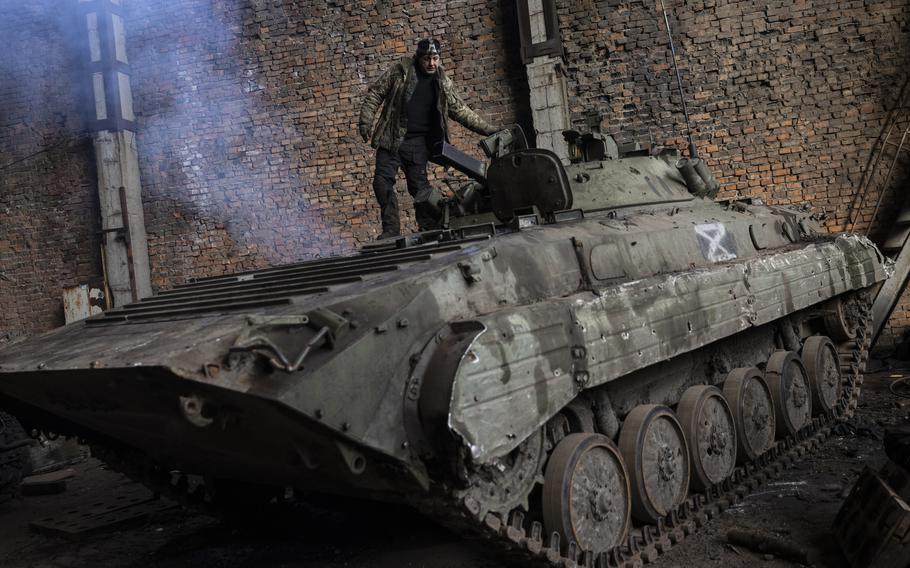 At a field repair site in the Kharkiv region, a maintenance battalion works to repair tanks and armored personnel carriers seized from the Russians, along with some Ukrainian ones. (Heidi Levine/The Washington Post)

KHARKIV REGION, Ukraine — When Ukrainian forces came across the abandoned Russian fighting vehicle on the battlefield, they knew they had found a rare prize.

The BMP-3, armed with a 100mm main gun and a 30mm autocannon, was one of the few of its kind that the Ukrainian military had seized from the Russians since the start of the invasion. But about a month ago, after weeks of being operated by Ukrainian soldiers, its engine and fueling system began to fail.

Ever since, the Russian fighting vehicle has been out of commission, stuck at a repair site in Ukraine’s northeastern Kharkiv region.

Ukrainian forces have seized hundreds of what they call “trophies” — Russian tanks, armored personnel carriers and infantry fighting vehicles — since the start of the war. They’ve become valuable assets for Kyiv. The brigade working at this repair site jokingly referred to them as “lend-lease” tanks, referring to the World World II program under which the United States supplied Britain, the Soviet Union and other Allied nations with humanitarian aid and military equipment.

But many of these tanks and other vehicles are stuck in hangars like the one at this repair site as brigades struggle to find the parts needed to repair them. The unit here, a maintenance battalion for the 14th Separate Mechanized Brigade, has been unable to find the parts it needs for the BMP-3. “It’s obvious it should be fighting the enemy and not sitting in a hangar,” said Ruslan, the 47-year-old commander of the maintenance battalion, who spoke on the condition that his last name not be used.

To find parts to fix the vehicle, the battalion would need to first find an identical match. Unlike earlier models of this type of fighting vehicle, the BMP-3 cannot be repaired using parts from similar Ukrainian vehicles.

It’s possible another brigade might have a vehicle that is a match, Ruslan said, but there is no system for locating the parts. He suggested that the armed forces could benefit from a program or database tracking compatible parts across brigades. “It would save time,” he said. “It would save a lot of resources.”

A press officer for the 14th Brigade, the only brigade that has fought on all major front lines in the country since the start of Russia’s invasion, joked that it’s in the Ukrainian nature to collect and hoard prized possessions. It’s not always as easy as merely asking another brigade for its identical trophy tank or vehicle. Members of the maintenance battalion for the 14th Separate Mechanized Brigade at work at their field repair site. (Heidi Levine/The Washington Post)

In the Donetsk region, Vadym Ustymenko, a member of a tank unit in Ukraine’s 25th Airborne Assault Brigade, said he has changed tanks “six or seven times” in the past seven months because they often need repair. He’s now fighting in a T-80 tank — among the best models in Ukraine’s arsenal.

The 25th Brigade was the first unit into the city of Izyum after Russian forces hastily retreated from the Kharkiv region in September, leaving behind an extraordinary amount of tanks and armored personnel carriers.

“Speaking about just the tanks, there were indeed a lot of them, but very few were operational,” Ustymenko said. “Those that you could just start up or only needed a few minutes of work, you could count on one hand. Those that needed some repair but would eventually run was another 30 percent probably. And the last 50 percent was junk that requires a whole lot of work.”

For the tanks that were in bad condition, some could be “donors” of needed parts, said another soldier in Ustymenko’s unit. Because Ukraine’s weapons largely date to the Soviet Union, a tank that’s more than 30 years old could be improved with a spare part from a seized Russian model that’s just five years old.

The soldiers in Ustymenko’s unit said they occasionally communicate with other brigades about spare parts. One soldier in the tank unit mentioned that they asked for some ammunition for their tank from a brigade in the area and were refused.

While Ukraine can often repair its own equipment on or near the front lines with available spare parts, a breakdown of Western-provided equipment typically means it needs to be towed back to a NATO facility in Poland. That could mean removing a vital weapon from the battlefield for weeks.

“The weapons that are coming from the U.S., they are mostly coming from stockpiles, so they are not new,” said Daria Kaleniuk, executive director of the Anti-Corruption Action Center in Ukraine. She has been meeting with Western politicians to push for Ukraine to receive modern fighter jets and battle tanks. Sending damaged weapons to Poland “is a huge delay and a big frustration for the Ukrainian military,” Kaleniuk said.

At the field repair site in the Kharkiv region, members of the maintenance battalion worked to fix two Russian tanks and several armored personnel carriers, repairing engines, steering systems and machine-gun turrets. One of the first things the unit does when repairing a trophy is repaint it, removing the “Z” symbol of its former Russian owner.

Often, the most challenging part of repairing a Russian vehicle is simply identifying the problem, Ruslan said. Many tanks were seized in the area around Kupiansk during Ukraine’s Kharkiv counteroffensive.

Each brigade has a technical reconnaissance unit dedicated to searching fields for abandoned vehicles and equipment, then transporting them to repair sites. The tanks and vehicles have become easier to find since the leaves fell off the trees, improving visibility.

Constant power outages create an additional obstacle. The near-daily blackouts at this repair site delay the team’s work. Even a generator isn’t enough to power all of the tools they need to fix the equipment. This is part of Russian President Vladimir Putin’s goal, Ruslan said.

“The Russians are doing this for a reason,” he said.