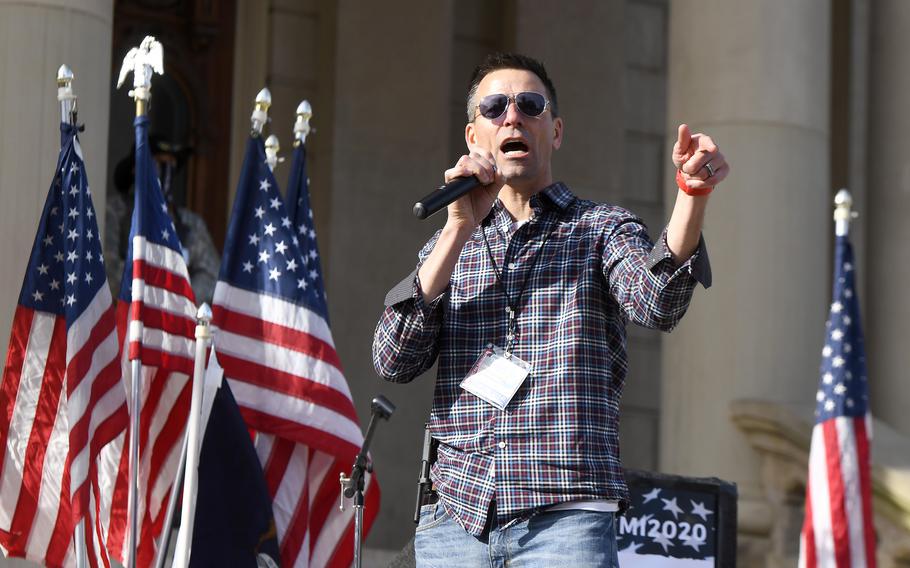 Ryan Kelley of the American Patriot Council fires up the crowd as he speaks as President Donald Trump supporters gather at the state Capitol Building in Lansing, Michigan, for a "Stop the Steal" rally disputing the presidential election Saturday, Oct. 14, 2020. (Rod Sanford/TNS)

LANSING, Mich. — Ryan Kelley, a former candidate for Michigan governor, repeatedly declined under oath to identify himself in videos from the riot at the U.S. Capitol on Jan. 6, 2021, according to a newly released transcript of his interview with investigators for a U.S. House committee.

Kelley, who came in fourth place in the GOP primary race for governor on Aug. 2, told officials from the U.S. House’s Select Committee to Investigate the January 6th Attack on the United States Capitol that he did nothing unlawful.

But, Kelley contended during a sworn deposition under the penalty of perjury that his First Amendment right to peaceful assembly protected him from having to identify himself.

The Allendale real estate broker and conservative political activist also suggested that there was a Fifth Amendment right against having to damage his own reputation. The amendment protects people from being forced to incriminate themselves.

“Mr. Kelley, how would answering that question impede your ability to peaceably assemble? It’s a video of a thing that happened more than a year ago,” an official with the U.S. House committee asked him at one point during the exchange.

“Yeah,” Kelley responded. “Well, I elect not to identify myself in any videos that are being played.”

Later, an official with the U.S. House committee said Kelley was stating his “opinion of what the Fifth Amendment is.”

The official’s name was redacted in the transcript.

Kelley’s April 21 interview with the U.S. House committee was revealed Wednesday when the panel released a series of transcripts from past depositions. As he was campaigning for governor, he answered questions for longer than two hours, according to the document. And he did it without having his own lawyer present.

During the interview, an official with the committee said it might have been “beneficial” for Kelley to have an attorney with him.

Less than two months later, Kelley was arrested on June 9 and charged with four misdemeanors related to his actions outside the U.S. Capitol on Jan. 6, 2021. The charges were knowingly entering or remaining in a restricted building, disorderly and disruptive conduct, knowingly engaging in any act of physical violence against person or property in a restricted building or grounds and willfully injuring or committing depredation against property of the U.S.

Ryan Kelley pleaded not guilty and the charges are still pending.

Witnesses helped FBI agents confirm a man shown in photos and videos of the riot was Kelley, according to federal prosecutors.

In his interview with the U.S. House investigators, Kelley acknowledged that he was in Washington, D.C., on Jan. 6, 2021, and that he saw people heading up the Capitol stairs.

Asked what he thought was happening, he responded, “First Amendment. Redress of grievances. Lawfully protected by the Constitution.”

The U.S. House investigators showed Kelley a video of a person at the Capitol whom federal prosecutors later identified as Kelley.

“Mr. Kelley, in the video that we just saw, there was a man in blue jeans, a black jacket, black sunglasses and a backwards hat who was gesturing at the crowd to come closer or to come in. Was that you?” an official asked.

“I won’t be identifying or denying anything in any video of myself,” Kelley replied.

Kelley tangled with the investigators over his reading of the Fifth Amendment, which protects from people from being compelled to serve as witnesses against themselves in criminal cases.

“Just so we understand, you’re asserting the Fifth Amendment to refuse to respond to a question asking you identify if somebody in a video is you because that answer would tend to incriminate you?” an official asked.

“Not incriminate, no. To bring infamous, bad reputation,” Kelley said.

Kelley got fourth place in the Republican primary race for governor with 15% of the vote. He has suggested he might run for another office in the future.