As nation awaits Jan. 6 report, Republicans release their own 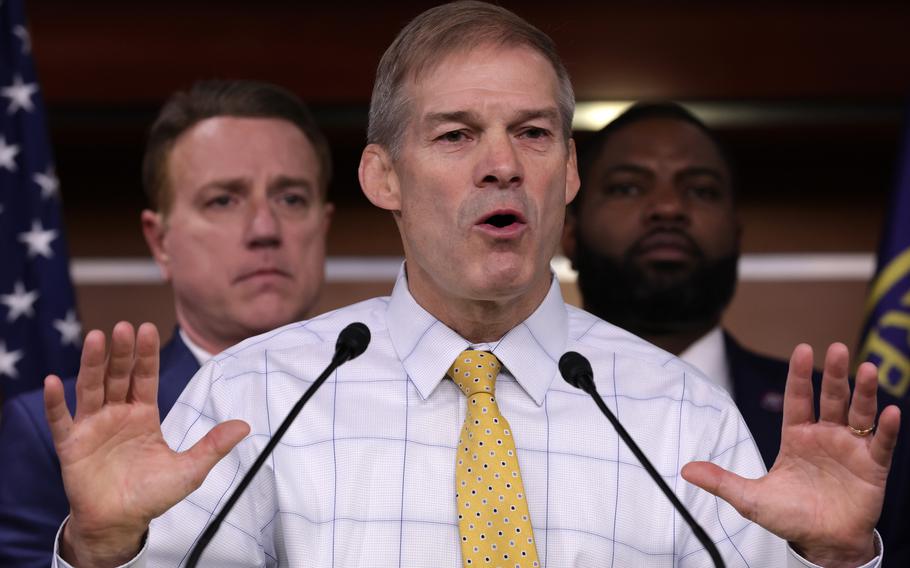 Flanked by House Republicans, U.S. Rep. Jim Jordan, R-Ohio, speaks during a news conference at the U.S. Capitol on Nov. 17, 2022, in Washington, D.C. Jordan was one of the authors of the Republican version of the Jan. 6 report. (Alex Wong/TNS)

WASHINGTON — On the eve of the expected release of the final report from the House select committee investigating the Jan. 6, 2021, assault on the Capitol, a group of Republican lawmakers put out their own account of the attack that focused instead on Capitol Police preparedness that day.

The report, which does not mention former President Donald Trump’s role in inspiring the day’s events, comes after months of Republican criticisms of the bipartisan panel, and only days before they retake control of the House.

The Republican version of a Jan. 6 report showcases the partisan chasm between the responses to the attack, particularly since the five lawmakers who released it were those House Republican leader Kevin McCarthy initially chose for the select committee but withdrew when Speaker Nancy Pelosi declined to seat two of them.

That official Jan. 6 panel report is expected to reveal more details of an 18-month investigation that ultimately concluded Trump should be referred to the Justice Department for potential federal prosecution under at least four statutes.

Meanwhile, the authors of the Republican report, led by incoming House Judiciary Chairman Jim Jordan of Ohio and Rep. Jim Banks of Indiana, argued that Democratic leaders and police leadership left the Capitol vulnerable. It recommended changes to the structure of the board that oversees Capitol Police and making its work more transparent.

“Unlike the sham Jan. 6 report that focused on partisan politics and political payback, House Republicans released a report today that details how we can ensure another Jan 6 never happens again,” Banks tweeted Wednesday.

The select committee voted Monday to refer four Republicans, including Jordan, to the House Ethics Committee for defying a subpoena to testify about the attack.

Members of the Jan. 6 select committee have said their full report, which staff now anticipates will be released Thursday, includes the attack as well as Trump’s broader campaign to overturn his loss in the 2020 election.

Vice Chair Liz Cheney, R-Wyo., cast Trump as a threat to democracy in her remarks at Monday’s final meeting of the select committee. “He is unfit for any office,” Cheney said.

The committee also voted Monday to refer Trump and several others for potential criminal prosecution under several federal statutes, including obstructing an official proceeding, conspiracy and defrauding the United States.

The Thursday report will also cover several legislative recommendations to prevent another attack, which may face headwinds in the Republican-controlled House.

In advance of the report, the select committee released Wednesday transcripts of 34 interviews it conducted, including attorney John Eastman, former Trump administration officials and prominent conservatives like Kelli Ward, who chairs the Arizona Republican Party. Select committee members have said they conducted interviews with more than 1,000 witnesses and gathered troves of documents as part of their probe.

Reps. Rodney Davis of Illinois, Kelly Armstrong of North Dakota and Troy Nehls of Texas were also part of the group that released the Republican report Wednesday.

The Republican report faulted Capitol Police leadership for failing to adequately train officers or give them the equipment needed to protect the complex. The authors also pointed out that changes to a key intelligence-gathering division in December 2020 crippled the agency’s ability to prepare for the protests and subsequent attack.

“The slow response to the violence at the Capitol represents a multi-jurisdictional security breakdown. But the entity that is singularly tasked with protecting the Capitol complex failed to do just that on January 6, 2021,” the Republican report states.

For instance, according to the report, the incoming head of the division changed protocol so that analysts no longer conducted proactive social media searches. That left police leadership unaware of many of the threats circulating online.

The report also blamed Democratic leadership’s concerns over “optics” of calling the National Guard to the Capitol for a delay in their arrival. However, the report cited no evidence for that claim; testimony about concern for the optics came from Capitol Police leadership or members of the military.

Separately, the report also noted that Defense Department officials made their own changes that kept decision-making about the National Guard deployment away from congressional leaders.