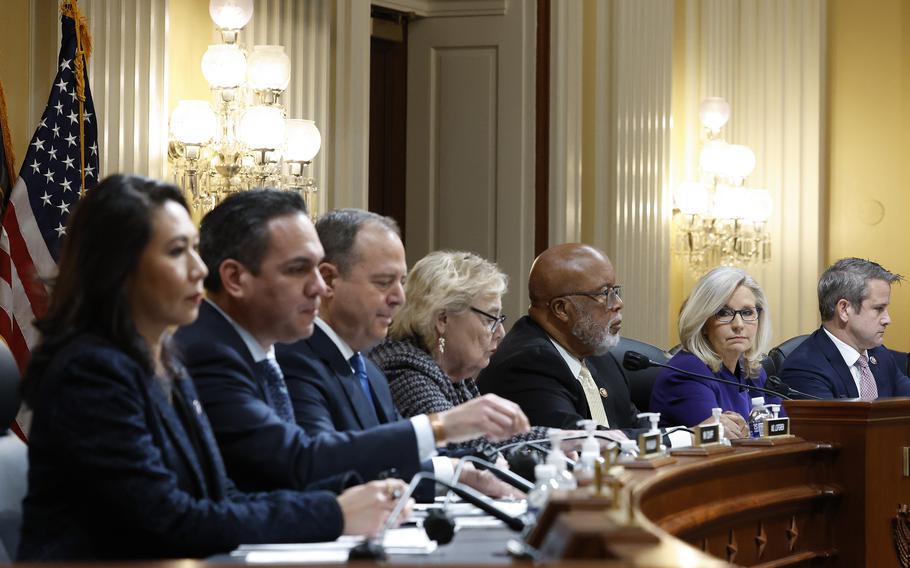 Members of the House Select Committee to Investigate the January 6 Attack on the U.S. Capitol hold their last public hearing in the Canon House Office Building on Capitol Hill on Monday, Dec. 19, 2022, in Washington, D.C. (Anna Moneymaker/TNS)

WASHINGTON — The House committee investigating the Jan. 6, 2021, insurrection delayed publishing its final report Wednesday, but provided new details with the release of 34 transcripts of depositions taken during its investigation.

Many of the released transcripts are from lesser-known figures who played behind-the-scenes roles in the attempt by former President Donald Trump and his allies to overturn the 2020 presidential election, though the list includes some of the biggest names involved, such as California attorney John Eastman, the architect of the legal theory embraced by Trump positing that the vice president could reject certain states’ electors.

Nearly all pleaded the Fifth Amendment at some point throughout their testimony in response to questions asked by committee members and staff, showing what information the panel hoped to learn and what dots they were trying to connect. For example, the committee asked Trump confidant Roger Stone whether he discussed Jan. 6 and strategies heading into that day during a Dec. 27, 2020, meeting with Trump at the former president’s Florida home.

The committee wanted to know from Eastman what emails and phone numbers he used to discuss the 2020 election, where he has stored any documents related to the election and whether he would provide specific documents, such as a seven-page paper he wrote that Rudy Giuliani shared with Georgia legislators during a Dec. 3, 2020, state Senate judiciary hearing. The House Jan. 6 committee asked if he had reached out to state lawmakers after the 2020 election.

Investigators also asked detailed questions about the memo Eastman wrote about the vice president’s role in certifying election results. They noted that he had discussed his memo in media interviews with the permission of the president, though he was invoking the Fifth Amendment in speaking with investigators.

Eastman was the only named person besides Trump referred by the committee to the Department of Justice for potential criminal charges stemming from the panel’s investigation.

Wednesday’s release is just a portion of the more than 1,000 depositions taken during the committee’s 18-month investigation, which concludes when the final report is issued. Republicans are not expected to reconstitute the committee when they take control of the House on Jan. 3.

The final report, which the committee says it intends to make public Thursday, is expected to include additional evidence to what the committee presented during its nine public hearings this year, along with detailed descriptions of the scheme pushed by Trump and his allies to overturn the 2020 presidential election results using state legislatures and the courts.