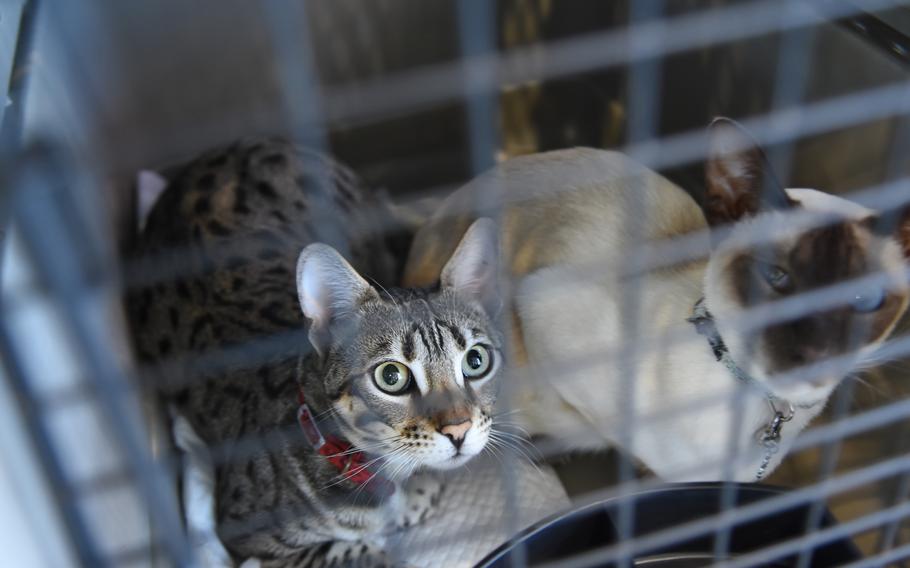 Nala, left, and Evia, peer out from their kennel inside the passenger terminal at Ramstein Air Base, Germany, in May 2020. A provision in defense legislation passed by the Senate on Dec. 15, 2022, would ease some of the financial burden for U.S. service members and their families moving to or from overseas with pets. (Jennifer H. Svan/Stars and Stripes)

Service members preparing for a military move with their pets may get some much-needed relief from exorbitant shipping costs, following the Senate’s approval Thursday of the $847 billion defense spending package.

Buried in the 4,000-page document is a small provision that for the first time authorizes the Pentagon to reimburse military members for household pet transportation fees.

Those costs have soared in recent years, with fewer commercial airlines allowing pet owners to transport their animals in the cabin or as cargo.

With limited pet spaces on military flights, more families have been forced to use pet shipping services, which can cost thousands of dollars, depending on pet size and destination.

The Defense Department up until now did not reimburse service members for pet shipping fees, though some help was available through no-interest loans and grants offered by military relief societies.

The legislation approved Thursday says each of the military services’ secretaries “may reimburse a member for any cost related to the relocation of a pet” up to $4,000 per move to or from a duty station outside the continental United States and up to $550 for a move within the United States.

The measure is part of the sweeping National Defense Authorization Act for fiscal year 2023, which began Oct. 1. The bill awaits President Joe Biden’s signature. The founder of Leave No Paws Behind USA, a nonprofit organization that assists military families with pet transportation costs to and from overseas, said the provision will go a long way in defraying expenses.

The proposed reimbursements are “huge, regardless of what rank or where you are in your military career,” Liz Hensel said Friday.

This will help “military families of all branches alleviate some of that financial burden,” she said.

Hensel, a Marine Corps veteran and military spouse, started advocating for military families and their pets four years ago, when her family moved from California to Japan with their German shepherd, Prince.

The family lucked out, securing one of the limited pet spaces on the military-contracted Patriot Express for less than $300. But while doing research, Hensel learned that families were paying anywhere from $3,000 to $7,000 to move their pets.

“I knew that wasn’t right,” she said. “My husband is deployed right now and per usual, our pets are what is keeping” the family grounded. “They’re such an important part of our military family.”

Hensel said Sen. Corey Booker, a New Jersey Democrat, spearheaded the movement to help military families moving with pets after she contacted him two years ago.

It’s unclear from the language in the NDAA provision whether the benefit can be applied retroactively to military families that paid for pet transportation after the start of the 2023 fiscal year.

“Hopefully I can use this,” a person posted Friday on Leave No Paws Behind’s Facebook page. “I just dropped 6 grand to get my dogs here to Japan. They fly here in 4 days.”