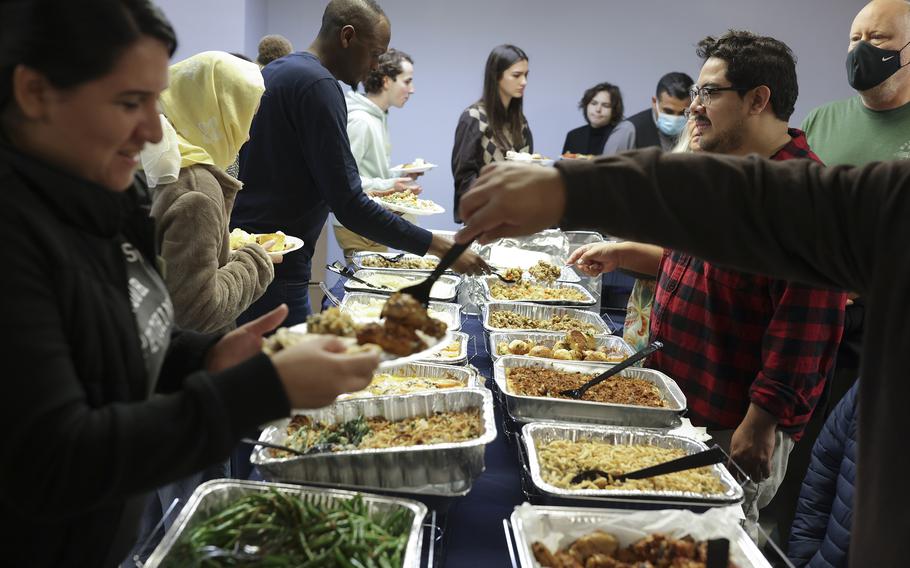 Refugees, volunteers and members of the community gather for a Thanksgiving dinner in Arlington hosted by Ethiopian Community Development Council. (Oliver Contreras/for The Washington Post)

For Afghan refugees working to make a life in the United States, Thanksgiving is not an especially big deal.

It's not their holiday. They don't crave turkey or gravy or mashed potatoes. They've never heard of the Pilgrims. And many of their family and friends are far away, some back in Afghanistan, making it impossible to gather on Thursday — or any other day.

And yet Thanksgiving is part of becoming an American, and one of the better parts, especially compared to what can be a desperate hunt for work or a frustrating quest to learn the language. They don't know what Thanksgiving is but, all in all, it seems like a good idea.

That was the vibe Sunday as hundreds of refugees gathered with American volunteers and others for a community Thanksgiving meal.

"You need to be part of this country's culture," said Mohammad Fisih Yaqoobi, 22, who immigrated to the Washington, D.C., area last year and attended Sunday's dinner. "I need to learn this culture and do it."

The group met in a community hall in Arlington, Va., in the headquarters of the Ethiopian Community Development Council, one of nine U.S. refugee resettlement agencies. Paper lanterns shaped like globes hung from the ceiling, and a cascade of string lights brightened the back wall.

On the buffet tables was an American feast — turkey and sweet potatoes, stuffing and gravy, pie and Reddi-wip — but there were also lentils and yucca fries and injera, a traditional Ethiopian bread. It was a potluck, with offerings from the American-born and the newly arrived side by side.

Like the vast majority of other refugees at the dinner, Yaqoobi is from Afghanistan. He arrived in the United States in September 2021 after four years in Turkey, where his family escaped in the midst of war. While there, he learned Turkish; now he has learned English.

His first Thanksgiving was a year ago. An American family invited him and his mother and brothers to dinner. It was the first time he had been invited into an American home, for any reason, and it made an impression. Their host procured a halal turkey and added rice and beans to the menu along with potatoes.

"We didn't have turkey in Afghanistan," Yaqoobi said. "We have turkeys, but we don't eat them." The event Sunday was packed, so much so that two dinners were held back-to-back to accommodate everyone. Still, the room was overflowing.

When President Joe Biden took office, he increased the number of refugees allowed into the United States. Then in August 2021, the United States pulled its forces and personnel out of Afghanistan, and as the Taliban took control of the country, many Afghans who worked for and with the United States qualified for U.S. visas.

In the fiscal year that ended Sept. 30, the agency brought 1,574 refugees to the Washington suburbs. About 95 percent of them are from Afghanistan; others are Ukrainians displaced since the Russian invasion, and some are from Central America.

The dinner, now in its 10th year, was suspended for two years by the pandemic. But it was resumed this year to bring together refugee families, volunteers, donors and community members ahead of the holiday.

"No politics, no religion, no nothing; just people getting together," said Sarah Zullo, director of the African Community Center, the local branch of the Ethiopian Community Development Council. "When people are actually sitting together to eat, we find we have a lot more in common than our differences."

Midway through the first dinner, Tsehaye Teferra stepped to the microphone. He had come to the United States from Ethiopia as a student in 1972 and stayed after a military coup in his country. He went on to help other migrating refugees and, in 1983, founded the Ethiopian Community Development Council.

"You can't learn the culture of a new country in one day," Teferra cautioned the group. "It is a gradual process."

This dinner, he added in an interview, was one small step in that process.

"We want them to connect with the spirit of Thanksgiving," he said. "We are basically saying to every immigrant, 'This is a symbol of welcoming.' Because there are times when refugees and immigrants feel they are not welcome here."

Nazifa Khaliqi, 52, said she knew nothing about Thanksgiving last year, which occurred soon after she arrived from Afghanistan. Slowly she has adjusted, and on Sunday, she celebrated the holiday.

"It is good here," she said through a translator. "Life is good for me." She said she is grateful for all the help she has received from Americans. One of her daughters, Rukhsar Qasemzai, 19, added, "I am thankful for my future, that I will have a future in the United States."

Yet a heavy weight remains, making celebration hard. When the Taliban came to power, Khaliqi and three daughters managed to get to the airport. They were evacuated and landed in the D.C. area. But her husband, son and a fourth daughter could not make it out, and they remain in Afghanistan.

"I'm so nervous that my husband and kids are stuck there," she said through a translator. "They cannot go out frequently. They are home most of the time."

And being a new American is not easy, even with family. Ahmadullah Noorzad, 33, worked for more than 10 years as an engineer for the U.S. Army in Afghanistan, coming to the United States in June with his wife and four children after their visa applications were approved. He was in danger, and desperately wanted to immigrate, but found it hard once it actually happened. His engineering certification is not honored here, so he is taking courses to become certified.

"We are not familiar with the society," he said. "This is the problem. We are trying to adjust."

He was happy to be with community on Sunday, though it wasn't quite the same as celebrations of the past because he was missing so many family and friends.

He had heard of Thanksgiving from some of the Americans he worked with during the war, but was never included in celebrations on the base. So, he gave it very little thought.

"I hope to search from the internet and find more about this day," he said.

Still, he was there, at the community dinner in his celebratory clothes — a long gray tunic and black vest. And when his third-grade son, Abozar, was asked whether he knew about Thanksgiving, he nodded yes. He had learned about it in school.