She fled Afghanistan and became a soccer star. Nadia Nadim wants to give women hope. 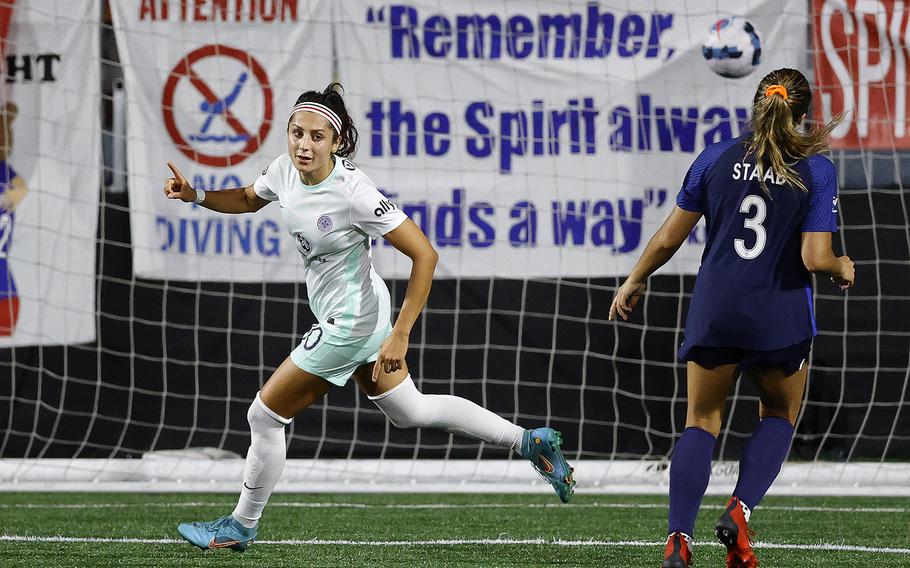 Nadia Nadim (10) of Racing Louisville FC celebrates after scoring during the second half against Washington Spirit at Segra Field on June 17, 2022, in Leesburg, Virginia. (Tim Nwachukwu/Getty Images/TNS)

LOS ANGELES — All Nadia Nadim needed was a chance. A chance at an education, a chance to study medicine, a chance to play soccer.

She would have had no chance had she stayed in Afghanistan, which was ruled by the Taliban when she fled with her mother and four sisters.

With forged passports they escaped to Pakistan, flew to Italy then climbed aboard a cargo truck they were told would take them to England. They made it as far as Denmark, where they wound up in a refugee camp.

The detour turned out to be one of the best things that ever happened to Nadim, then 12, because she not only discovered soccer in Denmark, but she also started a new life there as well.

"While I was young in Afghanistan, I wasn't really a part of anything," said Nadim, who is leading Racing Louisville in scoring with six goals in 11 games. Louisville plays Angel City on Sunday in the Los Angeles team's final regular-season home game, one Angel City must win to keep its playoff hopes alive. But Nadim may not play be available for it. After coming out in the 26th minute of Wednesday's loss to Portland with an injury, her availability on Sunday is uncertain.

"I wasn't allowed to play the game," she said of life in Afghanistan. "I wasn't allowed to be part of the education system. But I think once I got out of it, no matter if it was Denmark, England, [the] U.S., I would have managed to reach the heights that I wanted. Once the access is there, I know I'll kill it."

That access allowed Nadim to become the sixth-leading scorer in the history of the Danish national team. She won a league title in France, scored the first goal in a European Championship, earned a medical degree and learned to speak eight languages. In 2018, Forbes voted her one of the 20 most powerful women in international sports.

None of that would have — could have — happened had Nadim stayed in Afghanistan, which is why she greeted the Taliban's return to power last year with sadness and horror.

"Devastating," she said. "I thought we were on the right path to progress and a better future for girls. We gave the key back to some idiots who have a mindset that doesn't belong in this century."

According to the United Nations, human rights violations against women and girls have mounted since the U.S. departed and the fundamentalists regained control of Afghanistan. Thirteen months ago, 3.5 million women and girls were enrolled in school and 21% of the workforce was female. More than a quarter of the country's legislators were women.

Under the Taliban, females have been systematically excluded from public life. There are no female Cabinet ministers in the new government and girls have been banned from attending school beyond sixth grade and from working outside the home, where women must remain except in cases of necessity.

"It's heartbreaking," Nadim said. "It's hard for me to understand how unfair it is."

Nadim, 34, has lived outside Afghanistan nearly twice as long as she lived in it. That time and distance has given her a rare perspective. While the Taliban has enforced a strict form of misogyny, Nadim's family is proof that any female, given a chance, can achieve remarkable things.

Nadim's mother, Hamida, had the courage and smarts to smuggle her daughters out of Afghanistan after her husband, a general in the national army, was killed by the Taliban. Her younger sister Diana is a seven-time Danish boxing champion and her aunt Aryana Sayeed is among the world's most popular Afghan singers — something she never could have become if she had not fled in her homeland last summer. The Taliban later moved to ban most forms of music.

Yet while Afghanistan may offer the most striking example of women being denied equal rights, Nadim said it happens everywhere.

"Having access and equal opportunity is the key to female athletes, female scientists," she said. "There are so many girls who don't have that access just because they were born in a place where people have a different point of view how the life of a woman should be lived."

Soccer, the most global of games, has given Nadim a platform, and her ability to speak multiple languages has given her the ability to address those injustices, leading UNESCO, in 2019, to name her a global champion for girls' and women's education. And when her playing days are over — a day which is not yet near, she says — her skill as a surgeon will give her the ability to make even more lasting change in people's lives, something she said she may pursue with the humanitarian group Doctors Without Borders.

What doesn't interest Nadim is politics. The Taliban has soured her on that idea.

"I'm too straightforward to have success in politics," she said. "But I would love to be in places where decisions are made."

All she needs is a chance.