USS The Sullivans no longer sinking, but set for more repairs 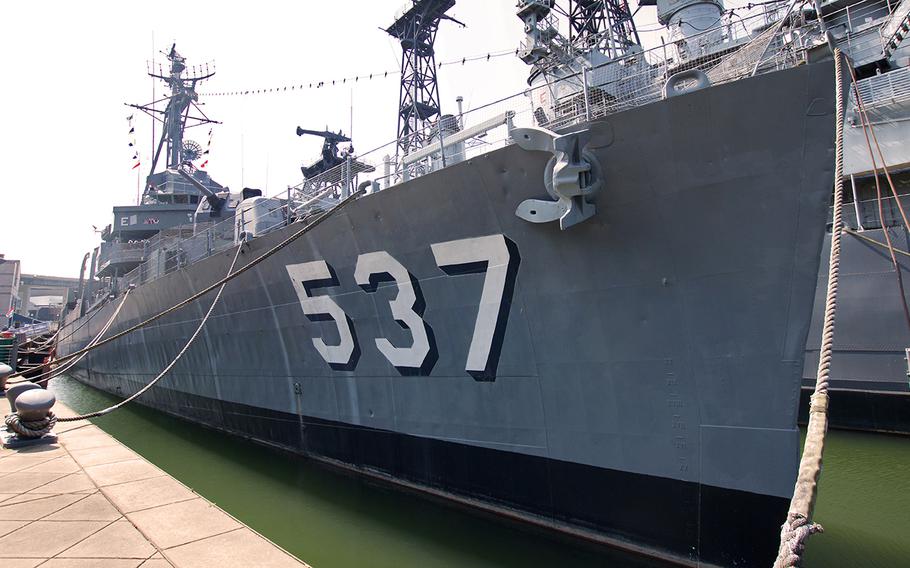 USS The Sullivans, the naval warship named after five Iowa brothers killed together while serving in World War II, no longer is sinking at a ship museum after more than $2 million in repairs and cleanup. (Facebook)

(Tribune News Service) — The naval warship named after five Iowa brothers killed together while serving in World War II no longer is sinking at a ship museum after more than $2 million in repairs and cleanup.

Iowans helped raise money for those repairs, wanting to make sure the USS The Sullivans can continue its mission of educating thousands of people each year about military service.

But what's next for the retired destroyer-turned-museum ship?

"We have a lot to learn from the ships themselves and the veterans who served on them," said Paul Marzello Sr., president of the Buffalo and Erie County Naval & Military Park, the New York museum where the ship is docked. "The mission is very simple, but it's difficult because it's all about the amount of money you can bring in" to preserve the ships.

The USS The Sullivans is named after Waterloo's five Sullivan brothers — Albert, George, Francis, Joseph and Madison — who died after their light cruiser, USS Juneau, was struck by a Japanese torpedo Nov. 13, 1942, and sank in the South Pacific during the Battle of Guadalcanal.

Their deaths remain the largest combat-related loss of life by a single family at one time in American military history.

USS The Sullivans was commissioned Sept. 30, 1943, and christened by Alleta Sullivan, the men's mother, from Waterloo.

After serving in both World War II and the Korean War, the Fletcher-class destroyer became a training ship with the 6th Fleet before being decommissioned Jan. 7, 1965. The Navy donated the USS The Sullivans to the military park in Buffalo, where it is one of the star attractions.

But in April, crews found 15,000 to 20,000 gallons of water had poured into the engineer's room through tiny holes below the waterline. The warship listed, reaching a near 45-degree angle and coming close to sinking. Crews sprang into action, pumping out water and trying to save artifacts displayed on the ship. They applied epoxy coating to the hull and installed a cathodic protection system to prevent further erosion, Marzello told the Waterloo-Cedar Falls Courier.

Veterans from around the world, including in Iowa, donated to the effort to save the ship, Marzello said. Videos of some of the repair work are shown on the park's YouTube channel, which has nearly 9,000 subscribers.

Now the military park is trying to figure out how to preserve the ship for future generations.

After securing a congressional commitment of $7.5 million, park staff are bringing in Joe Lombardi, a naval architect with Houston-based Ocean Technical Services, later this month or early December to examine the integrity of the hulls of the USS The Sullivans, USS Little Rock and USS Croaker — all docked at the same site.

"He has several things to respond to, mainly to analyze the integrity of the hull of all three ships we have in the water and to determine what, if any, remaining product is in any of the ships," Marzello said.

When the military turns over ships to cities to become floating museums, there often are fluids, such as diesel fuel or oil from machinery, in the vessels, he said. If the ship springs a leak, those fluids can pollute the water.

Lombardi also will give his opinion whether it's warranted to haul one or more ships to a dry dock for repairs, Marzello said. If that's the recommendation, tug boats would have to move the Croaker and the Little Rock out of the way to free The Sullivans to be towed 18 hours across Lake Erie to a dry dock.

"He'll give us at least three proposals of what could be done: Dry docking, building a coffer dam or making the repairs in situ, or where it is," Marzello said.

Park staff hope to have those recommendations by February or March.

Historians with the Buffalo park visited Waterloo this past summer to see artifacts at the Sullivan Brothers Iowa Veterans Museum. Museum staff also took the visitors to the cemetery where the brothers' parents and sister, Genevieve, are buried and visited a local Sullivan historian, Mike Magee, said Pat Kinney, oral historian for the Grout Museum District, which includes the veterans museum.

"The linchpin between the Buffalo military park and our museum is Kelly Sullivan, Albert Sullivan's granddaughter, who is the official Navy sponsor of the current USS The Sullivans DDG-68, as her great-grandmother Alleta was of the ship in Buffalo, the USS The Sullivans DD-537," Kinney said in an email.

That's right, there are two USS The Sullivans. The second, an Arleigh Burke-class destroyer, was commissioned in 1997.

Kelly Sullivan will speak at Veterans Day services at the Waterloo museum Friday and Saturday. The programs, which start at 1 p.m., will include a 17-minute video about the Sullivan brothers and three brief living history presentations.

Museum admission is free for veterans and active-duty military on Friday and Saturday.

The Sullivan Brothers museum has a huge collection of items from and about the Sullivans, including a recreating of the Sullivans' childhood living room, a recording of the brothers singing "When Irish Eyes are Smiling" and footage of the discovery of the shipwreck of the USS Juneau.