Repairs to USS The Sullivans will be costly, take time 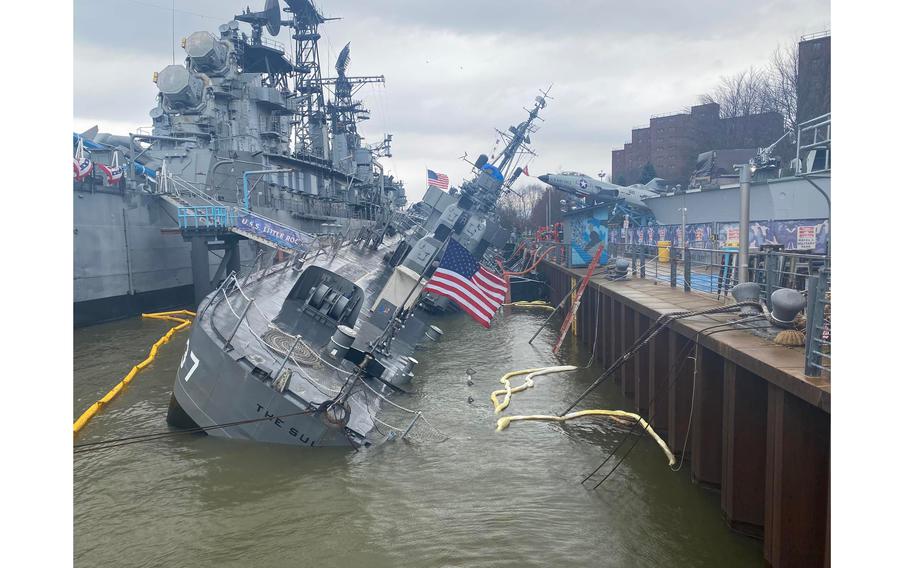 Officials who provided an update on the World War II-era destroyer USS The Sullivans said the ship is stable but not completely out of danger from sinking. (U.S. Coast Guard Sector Buffalo/Facebook)

(Tribune News Service) — It’s unlikely the USS The Sullivans will sink from the breach in her hull, but it will take at least a week to make preliminary fixes.

And crews have shifted focus from pumping water out of the vessel to removing contaminants from it to protect the environment and Lake Erie.

Officials who provided an update Saturday on the World War II-era destroyer said the ship is stable but not completely out of danger from sinking.

“Is it possible? Yes. Not if we can help it,” said Paul Marzello, president and CEO of the Buffalo and Erie County Naval & Military Park.

The Sullivans is a floating tribute to a working-class family that lost all five of its sons aboard the USS Juneau during World War II when it was struck by a Japanese torpedo in the Pacific Ocean, resulting in the deaths of 687 men.

Marzello discovered around 9 or 10 p.m. Wednesday that the ship was taking in water in the shallow waters of Buffalo’s Inner Harbor.

Industrial-sized pumps worked throughout Thursday night and reached a point of “equilibrium,” in that they were pumping out as much water as was leaking into the vessel.

The U.S. Coast Guard estimated Thursday afternoon there were more than 3 million gallons of water inside the ship.

On Friday, crews from an industrial diving company were attempting to get to areas of the ship that remain full of water and then seal them once the water is removed, Marzello said. 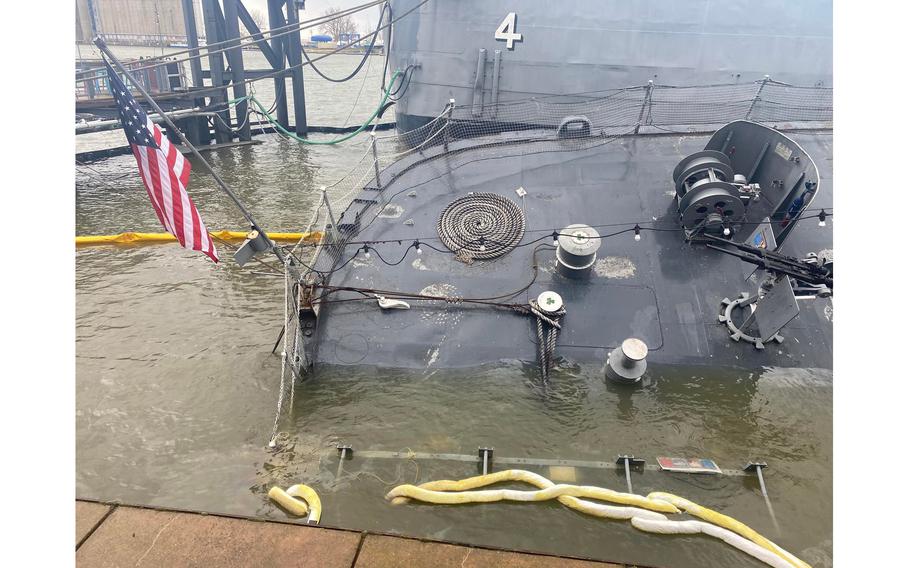 The breach is aft of midship, on the starboard side of the vessel, which is listing to one side. Officials still did not know the cause of the problem.

Efforts to pump water out of the ship were temporarily halted Friday because diesel oil was leaking from The Sullivans into the harbor.

Saturday officials said the focus had shifted to removing contaminants from the ship. Divers had started skimming inside the vessel, pulling out thousands of gallons of contaminants — diesel, hydraulic and lube oils — that would have been present during the operation of the ship and may still be in the ship. The goal is to try and prevent the contaminants from damaging the ecology or Lake Erie.

“Basically (they’re) pulling the product out of the vessel and bringing it onto the shore into a tank to be disposed of. At this point there have been 2,520 gallons of product that have been pulled off of the vessel, and it continues. That process is still continuing,” said Bill McKinstry, commander of the Coast Guard Buffalo sector.

“We’re putting up all the equipment needed to ensure that we collect whatever does get into the water and doing the best we can with that. But right now, we’re trying to get it from the ship before it ever hits the environment, ... and then we can start to address the water (pumping) side of it,” McKinstry said.

Representatives from the Coast Guard, the park, BIDCO, City of Buffalo, Erie County and New York State have been assembled as a unified command staff for operations to “save” the ship, Marzello said.