WATERLOO, Iowa (Tribune News Service) — On a weekend when sailors from both the decommissioned and active ships USS The Sullivans reunited at Iowa Irish Fest, a new memorial depicting the original Navy ship was unveiled Sunday in Waterloo.

The occasion came a few months in advance of the 80th anniversary of the sinking of USS Juneau during World War II and the death of the five Sullivan brothers from Waterloo — Albert, George, Francis, Joseph and Madison — who were of Irish descent.

The sailors brought Navy camaraderie to Waterloo to dedicate a trio of special white cement mixing drums from Manatt's Inc., one bearing an iconic image of the Sullivan brothers overlooking the now-retired USS The Sullivans DD-537 vessel at sea and its familiar emblem.

"Since Waterloo is the home of the Sullivan brothers, we just thought this would be a great way to honor not only the Sullivans, but all veterans as well as active service members," said Chris Manatt, north area manager.

Members of the USS Iowa SSN 797 also were in attendance.

"One of the coolest parts was having the sailors here and interacting with them," Manatt said. "They dedicate their lives to protecting us, and it was pretty awesome seeing the veterans from the 537 looking up there and seeing their ship."

James R. Diefenderfer Jr., commander of the DDG 68, cut the ceremonial red ribbon, surrounded by about a dozen members of the Navy faithful, a number of whom were from his crew and in uniform.

Kelly Sullivan, a granddaughter of the late Albert Sullivan, told the veterans in attendance that "the spirit of the five Sullivans is in all of you, with your patriotism and your dedication to honoring our country."

After the ceremony, Diefenderfer, from Delaware, reflected on what it meant to be stationed on the USS The Sullivans.

"I knew it was a special ship. I knew it had a special history behind it," said Diefenderfer. "When I got to the ship and served on board for a year or so, it really felt even more special. Being back here in Waterloo, where the five boys walked around and went to restaurants and bars downtown, it's really special to see the streets that they grew up on, and a town that embraced them when they were here, and then embraced their family when they were gone."

The new memorial has a second mixing drum depicting another U.S. Navy icon, the USS George Washington. A third drum, in the middle of the other two, had the Manatt's Inc. logo.

They were mounted on concrete slabs, some 12 feet high, in front of the Manatt's plant and distinctively placed right next to the highway bridge over the Cedar River.

A concrete sidewalk, bench and two flag poles, one with the American flag and the other with the Iowa state flag, round out the new display.

"The reunion's been very great. It's a pleasure to get both ships together because of the camaraderie that we have as sailors," said Bill Galarneau Jr., 79, from Massachusetts, a machinist who served on DD-537 from 1963-1965. "It's always good to see old friends." 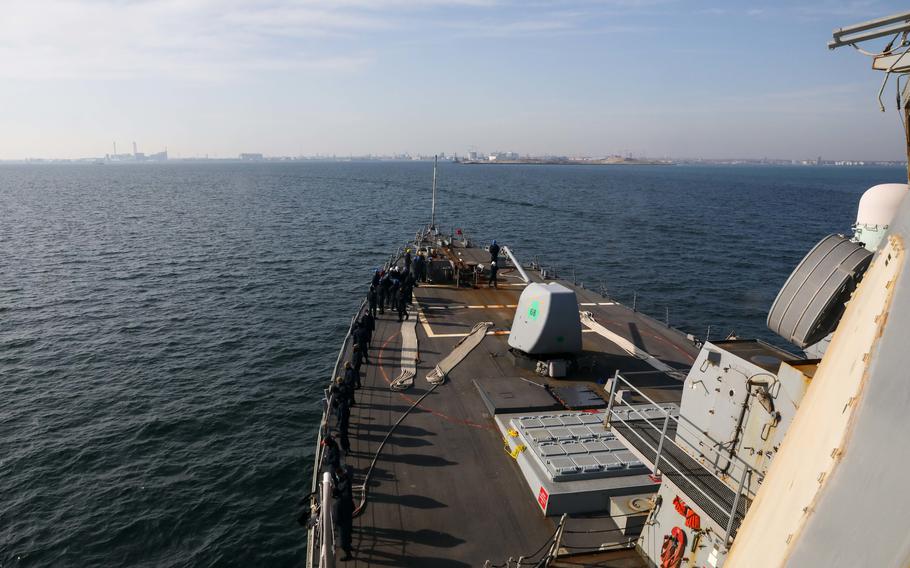 The destroyer USS The Sullivans pulls into port in Copenhagen, Denmark, March 21, 2022. On a weekend when sailors from both the decommissioned and active ships USS The Sullivans reunited at Iowa Irish Fest, a new memorial depicting the original Navy ship was unveiled Sunday, Aug. 7, 2022, in Waterloo, Iowa. (Mark Klimenko/U.S. Navy)