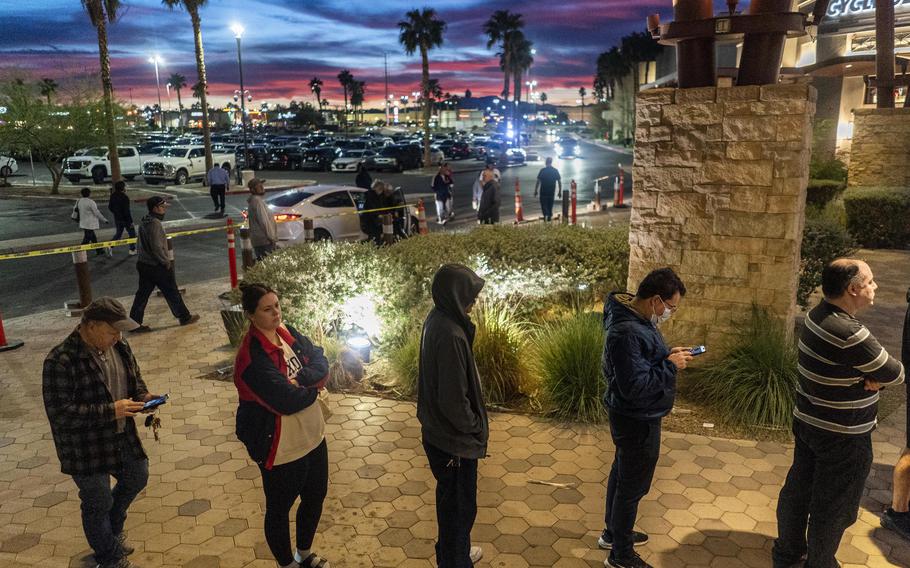 A long line of Nevada voters wait outside to cast their votes at a polling place in Las Vegas on Friday, the last day of early voting. (Melina Mara/The Washington Post)

Republicans hold significant advantages on the bread-and-butter issues of the economy and inflation that are central concerns of this fall’s election, and are poised to claim a majority in the House in Tuesday’s election, according to a Washington Post-ABC News poll.

If recent history is a guide, Democrats need a clear lead in this measure to hold off Republican gains. Many more Democratic seats are considered toss-ups, according political handicappers, putting the party at a disadvantage heading into Tuesday. At this point four years ago, when they swept to power in the House in a rebuke to President Donald Trump, Democrats held a seven-point advantage on voters’ intentions. But when Republicans had big victories in 2010 and 2014, they had somewhat bigger pre-election advantages than the current poll shows.

With Republicans needing to win a net of five seats to take control of the House, Democrats face overwhelming odds to prevent that from happening. The poll findings cannot predict the number of seats that could switch hands, only the overall direction of voters’ intentions. Nor does the poll provide a look at the state of Senate races or the GOP’s chances of winning a majority in what is now a 50-50 Democratic-controlled chamber.

One other factor in the GOP’s favor: Republicans continue to be more certain about voting, with 80% of Republican-leaning voters saying they are certain to vote or have already done so, slightly higher than 74% of Democratic-leaning voters. Certainty to vote among Democrats is eight percentage points lower than in 2018, while holding steady among Republicans. Voters’ faith in the electoral process reflects doubts sown after the 2020 election, in which the defeated Trump refused to concede to Joe Biden and made unfounded claims of voter fraud before his supporters stormed the U.S. Capitol on Jan. 6, 2021. By more than 2 to 1, Americans say they are very or somewhat confident that votes in the midterm elections will be counted accurately, on par with previous years. That includes more than 8 in 10 Democrats and more than 6 in 10 independents. Among Republicans, 55% express confidence compared with 45% who do not, including 19% who say they have no confidence in an accurate count.

Several hundred GOP candidates for House, Senate or statewide offices this year have denied or questioned the results of the 2020 election. Two years after that vote, the new poll finds more than 1 in 3 adults who say they are not confident Biden was legitimately elected. That includes more than 7 in 10 Republicans.

Days before the final votes are cast and counted, the survey highlights reasons why Democrats are on the defensive, including that their candidates are burdened by Biden’s low approval ratings. Biden’s approval rating stands at 41%, little changed from 39% in September, with 53% disapproving. Among registered voters, his ratings are 43% positive, 53% negative.

Just over 8 in 10 Democratic voters give Biden positive ratings. Meanwhile, 9 in 10 Republican voters disapprove of the president’s job performance. Among independents, 39% approve of the way Biden is handling his job and 56% disapprove. Voters who approve of Biden support Democrats 90% to 8%, disapprovers support Republicans by 83% to 12%. On balance, Democratic candidates are outperforming Biden by five points among registered voters.

There is a notable imbalance in the intensity of those assessments of Biden, with 44% of voters saying they strongly disapprove of the way the president has handled his job compared with 19% who say they strongly approve. Biden’s strong disapproval among independent voters is close to the overall finding at 42%.

Abortion rights and threats to democracy animate many Democratic voters in particular and those issues are being used in final messages to stoke turnout as a way to offset the GOP’s overall advantages. Many Democratic candidates have highlighted abortion in their television ads and Biden delivered a speech about threats to democracy on Wednesday evening, hoping to motivate the party’s base.

The partisan lines that define the current state of the electorate are sharply etched in the new survey. More than 9 in 10 Republicans and Democrats say they will vote for their party’s candidate for the House. Meanwhile, independent likely voters split 53% to 45% for the Republicans. In 2018, independent voters backed Democrats over Republicans in House races by 54% to 42%, according to network exit polls.

Among likely voters, there is a sizable gender gap, with 62% of men saying they plan to vote for the Republican candidate in their district and 59% of women saying they will back the Democratic candidate.

Voters’ intentions are little changed from a September poll. They are less positive for Republicans than earlier in the year, before the Supreme Court overturned Roe v. Wade and elevated abortion rights as a central issue in the midterm campaigns.

One illustration of the divided U.S. electorate is the narrow split on the question of which party voters trust to cope with the main problems the country faces in coming years. On this, 42% say they trust Republicans, 40% the Democrats.

On immigration and threats to democracy, the first an issue pushed hard by Republicans and the second highlighted by Democrats, neither party enjoys a clear advantage, though there are big partisan differences on both that are masked by the overall results. The two parties are also about even on trust to handle education and schools, again with large partisan differences.

Republicans have sought to make crime a major issue this year and their advantage on the issue has increased significantly. In the summer of 2021, the two parties were rated equally in terms of which one was more trusted to handle crime. By last spring, the GOP edge had jumped to a double-digit advantage and has increased slightly since then.

The Supreme Court’s decision in Dobbs v. Jackson Women’s Health Organization, which struck down federal protection of abortion, is opposed by more than 6 in 10 adults, including almost 9 in 10 Democrats and more than 6 in 10 independents. Just over half of Republicans support the ruling.

The percentage of adults who say abortion should be legal in all or most cases has increased since the decision, with 66% saying it should be legal all or most of the time, the highest in a Post-ABC poll since 1995, when the question was first asked.

But Democrats have yet to unify abortion rights supporters behind their party, with voters who back legal abortion favoring Democrats for Congress by 67% to 29%, while Republicans receive 88% support among voters who say abortion should be illegal. Turnout is also a factor, with opponents of legal abortion nine points more likely to say they are certain to vote or already cast a ballot.

The Post-ABC poll was conducted by telephone Oct. 30-Nov. 2 among a random national sample of 1,005 adults with 75% reached on cellphone. The overall sample along with the subsample of 881 registered voters have a margin of sampling error of plus or minus four percentage points. The error margin is 4.5 points among the sample of 708 likely voters.