As Artemis I moon launch nears, more Orion capsules are on horizon 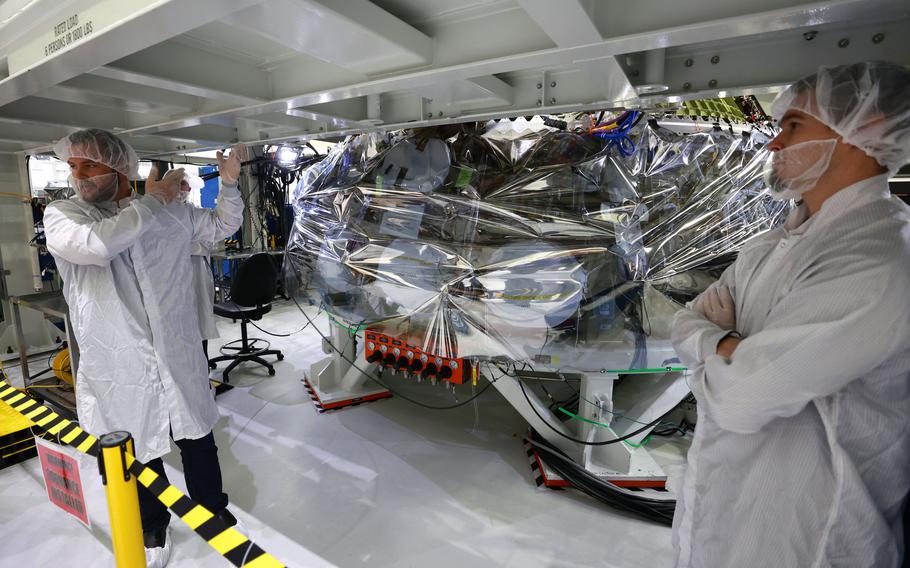 Orion program engineers talk in front of the Artemis II crew capsule being assembled at Kennedy Space Center, Fla., on Sunday, Aug. 28, 2022. The capsule will carry astronauts on a mission to orbit the moon in the future. (Joe Burbank, Orlando Sentinel/TNS)

(Tribune News Service) — The Orion spacecraft could be on its first trip to the moon on the Artemis I mission in less than a month, but teams at Kennedy Space Center continue to prep the next capsules planned for human missions, the first of which could fly in just more than 18 months.

Meanwhile, Lockheed Martin, the capsule’s prime contractor for the first five Artemis flights, won a new NASA contract this month to build out another three spacecraft.

“This order includes spacecraft, mission planning and support, and takes us into the 2030s,” said Lisa Callahan, vice president and general manager for Commercial Civil Space at Lockheed Martin. “We’re on the eve of a historic launch kicking off the Artemis era and this contract shows NASA is making long-term plans toward living and working on the moon, while also having a forward focus on getting humans to Mars.”

Artemis I is targeting its next launch attempt as early as Nov. 14. The flight will send the Space Launch System rocket topped with Orion from KSC’s Launch Pad 39-B on a weeks-long mission that will have it orbit the moon several times and fly farther than, and return to Earth faster than any previous human-rated spacecraft.

The extremes are meant to prove out the capsule’s safety for the planned Artemis II orbital flight with four humans on board as early as May 2024. This first mission will test out the heat shield on re-entry, during which Orion will reach 24,500 mph and generate temperatures near 5,000 degrees Fahrenheit.

Artemis III would follow as early as 2025 that would ultimately send at least two humans, including the first woman, to the lunar surface for the first time since Apollo 17 in 1972, with the assist of a Human Landing System in the form of a lunar version of SpaceX’s in-development Starship that will rendezvous with Orion in orbit. 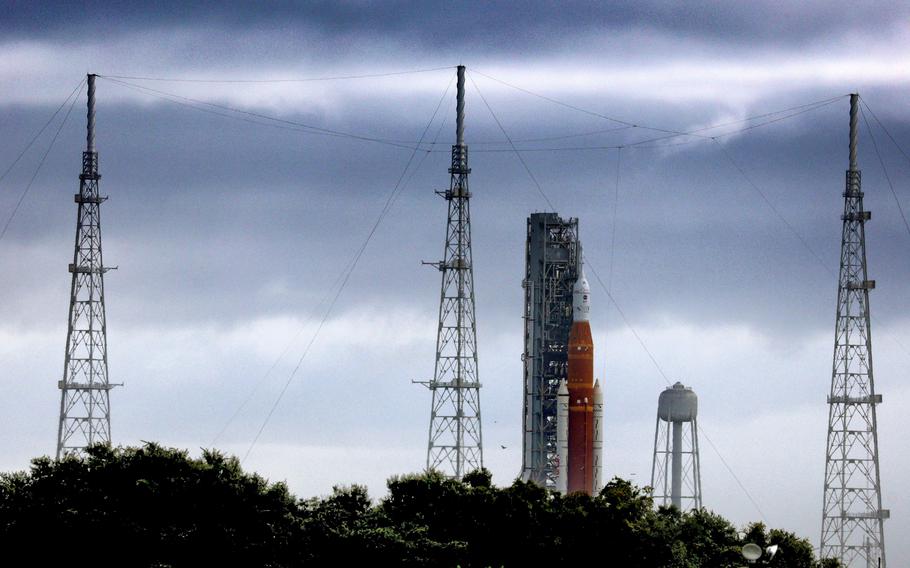 NASA’s plans are to fly at least one Artemis mission a year as it pursues a continued human presence on the moon and prep for sending the first humans to Mars by 2040 under the latest NASA timeline.

The Artemis program was born out of the remains of the canceled Constellation program from the 2000s that included the Orion capsule. The new program announced in 2012 was supposed to have seen its first launch by 2016, but has faced myriad delays and ballooning costs.

Originally projected around $500 million per flight, costs are now expected to surpass $4.1 billion per flight through the first four missions, according to NASA’s Office of the Inspector General. That’s a combination of costs across the SLS, Orion and Exploration Ground Systems.

Lockheed Martin already flew a capsule in 2014 as part of a test Exploration Flight Test-1, launching on a United Launch Alliance Delta IV Heavy from what was then Cape Canaveral Air Force Base for two orbits around the Earth and a splashdown landing. Artemis I and II will fly the final two of the first three capsules.

In 2019, Lockheed Martin was awarded construction orders for the next three, the Artemis III-V missions under NASA’s Orion Production and Operations Contract at a cost of $2.7 billion.

The new award announced Oct. 20 for Artemis VI-VIII is valued at $1.99 billion, furthering the company’s stated goal to lower per launch costs from the initial three launches, which are estimated to be $1 billion per capsule. A lot of that future savings comes through planned reuse of components from mission to mission. 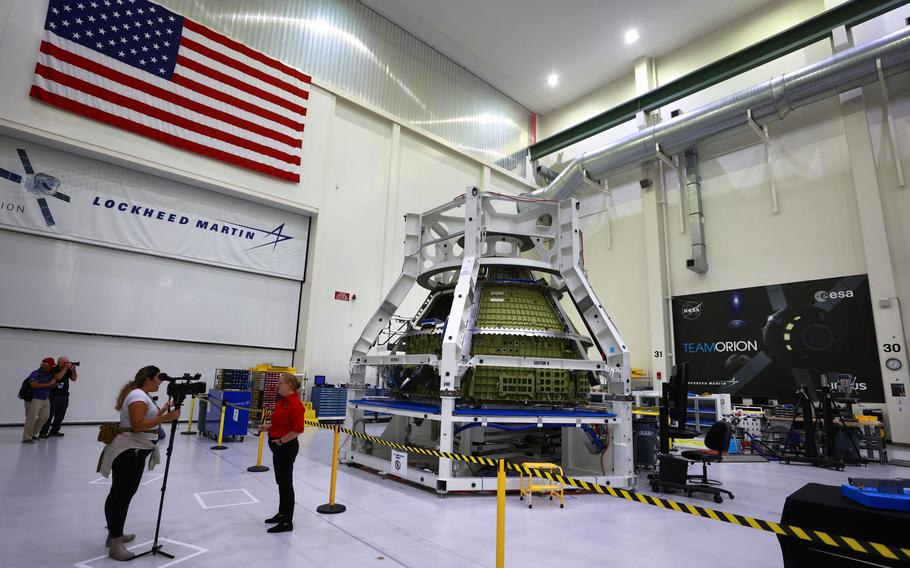 Orion program engineers talk in front of the Artemis III crew capsule being assembled at Kennedy Space Center, Fla., on Sunday, Aug. 28, 2022. The capsule will carry astronauts on a mission to land on the moon in the future. (Joe Burbank, Orlando Sentinel/TNS)

Lockheed Martin’s director of Orion production Kelly DeFazio said in August that by the time Artemis V flies, the capsule could be reusing up to 5,000 parts. Plans for the Artemis VI flight call for the reuse of the pressure capsule from Artemis III as well as interior elements including flight computers, crew seats, switch panels and other avionics.

“Lockheed Martin is committed to reduce the Orion production contract to deliver spacecraft 50% cheaper than we were from the early stages of the flight hardware,” DeFazio said.

The company said in a press release that Orion costs will fall another 30% for Artemis VI-VIII. NASA has the option to order another six spacecraft through the existing contract.

The capsules for II and III are both at the Neil Armstrong Operations & Checkout Building at KSC. For Artemis II, the Orion capsule along with the service module provided by the European Space Agency were recently powered on for the first time as teams ensure electrical and mechanical systems perform as designed.

The Artemis III capsule is at the same site getting interior and exterior structures installed while the heat shield arrived on Oct. 18 from Lockheed Martin’s facility in Waterton, Colo., flying in on NASA’s Super Guppy aircraft. The Artemis III service module remains in Bremen, Germany, as the ESA and contractor Airbus prep it for its trip to Florida.

Also at KSC are the three launch abort system motors for the Artemis II flight.

“Our team is ready for Orion’s first flight atop the Space Launch System rocket on Artemis I and working in parallel to support future Artemis missions to the moon,” said NASA Orion program manager Howard Hu. “We are making significant progress on multiple Orion spacecraft in various stages of production and assembly for Artemis II, III and IV.”

Artemis IV capsule manufacturing is underway at NASA’s Michoud Assembly Facility in New Orleans with final welding expected to occur before the end of the year, and expected KSC arrival in early 2023.

“That’s going to put us exactly where we need to be,” DeFazio said. “Here at Kennedy Space Center with three spacecraft in flow at once.”