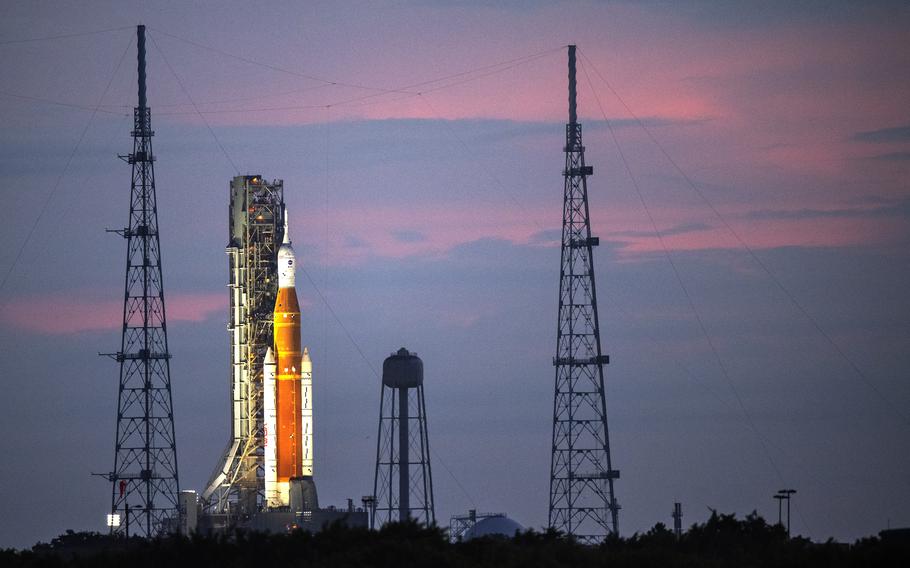 The Artemis I Orion capsule sits atop the Space Launch System rocket on Launch Pad 39B at Kennedy Space Center in Florida on Aug. 27, 2022. (Jonathan Newton/The Washington Post)

At first, NASA treated the kickoff of its return to the moon as a star-studded celebration. A list of celebrities — Jack Black, Chris Evans, Keke Palmer — were to make appearances during NASA's live broadcast. Josh Groban and Herbie Hancock had the honors to perform the national anthem, while the Philadelphia Orchestra, accompanied by Yo-Yo Ma, would play "America the Beautiful."

But NASA couldn't get its rocket off the ground, and so the performers never took the stage.

On Monday, NASA said it would once again delay the launch of its Artemis I, the first in a series of steps that would eventually return astronauts to the moon, this time because Hurricane Ian was barreling toward the Florida coast. This latest delay means NASA will not be able to attempt another launch for at least another three weeks. Previous attempts were marred because of technical issues — a bad sensor, a troublesome hydrogen leak. In recent days NASA said it had fixed those problems and was ready to go. But it's hurricane season, and NASA had been keeping its eye on the Atlantic Ocean. NASA had desperately hoped Ian would relent or push out west into the Gulf of Mexico. That would allow the space agency, it hoped, to keep the rocket on the pad and perhaps make another launch attempt.

It pushed the decision on whether to keep the rocket on the pad or roll it back from Saturday to Sunday, and then again to Monday, hoping conditions would improve. They didn't. And when the mission management team met Monday morning, it decided it was best to roll the 322-foot-tall rocket, with the spacecraft mounted on top, back the 4 miles to the massive Vehicle Assembly Building at the Kennedy Space Center.

It is a frustrating and disappointing moment for a program that has been plagued by all sorts of problems over the years: cost overruns, technical delays that filled a series of government watchdog reports have painted a grim picture of lax government oversight and poor contractor performance.

But in mid-August, NASA felt like it had overcome all those hurdles, and was ready to silence its critics by sending the most powerful rocket it has ever built into the heavens for a trip around the moon. The Orion capsule would not have any astronauts on board, but it would mark a significant first step in the Artemis program and pave the way for a flight with astronauts orbiting the moon in 2024, with a human landing a year or so after that.

It would mark a significant milestone for NASA, which has not sent astronauts to the moon since the last of the Apollo missions, in 1972. And the space agency has gone to great lengths to foster enthusiasm for a program that would send the first woman and person of color to the moon. It created a slogan, "We are going," and an Artemis logo that it emblazoned on the giant assembly building.

NASA celebrated the first launch attempt on Aug. 29 with pageantry, inviting the celebrities and performers for the first launch attempt. Vice President Harris, the head of the National Space Council, was at the Kennedy Space Center, too, ready to watch the rocket fly as she talked about "America's leadership" in space. Reporters from all over the world showed up.

But instead of broadcasting the celebrity-filled show as intended, a series of problems intervened. Two days before the first launch attempt, a series of lightning strikes hit the 600-foot-tall lightning protection towers at the SLS rocket's launchpad. After evaluating the rocket, spacecraft and ground systems, NASA officials said that the strikes were "low magnitude" and did not cause any damage or concerns that would prevent them from attempting the launch.

As engineers began to fuel the rocket, though, they encountered other problems, including a curious mystery. As they prepared the rocket for launch by flowing a small amount of liquid hydrogen through the engines, they could not understand why they could not get one of the rocket's four main engines cooled to the correct temperature.

Eventually, running out of time, they decided to postpone. Later they discovered that the problem wasn't with the temperature of the engine but, rather, a faulty sensor that was relaying bad information.

And so, five days later, they tried again. Unable to replace the faulty sensor, NASA said it would simply ignore it, as they pressed ahead with plans to launch. But this time, it encountered a massive leak of the liquid hydrogen fuel.

The engineers stopped, tried to troubleshoot. Then started the loading again. The leak persisted. So they stopped again. They tried to warm the fueling line, then use helium to pressurize it, but neither worked. Nor did a second attempt at warming the line.

Finally, three hours before the launch window even opened, NASA called a scrub.

To repair the leak, NASA discussed rolling the rocket back to its assembly building and kept safe out of the humid Florida air and the storms that routinely roll up the coast this time of year. But that would have caused weeks of delays, and so instead NASA decided to make the fixes at the pad, with the hopes of another launch attempt.

The problems were nettlesome, NASA said, but to be expected. The SLS rocket is a complicated vehicle that had never flown before, and there would be a series of growing pains associated with it. Dealing with liquid hydrogen, which is kept at minus-423 degrees Fahrenheit, is particularly difficult, it said.

Once the leak was fixed, NASA tested it this month by fully fueling the rocket with more than 700,000 gallons of liquid hydrogen and liquid oxygen. Again, the rocket sprung a hydrogen leak. But this time NASA was able to contain it, and said it was ready once again to try a launch before the current launch availability window closed on Oct. 4.

That's when it noticed a tropical depression forming in the Caribbean.

Still, NASA pressed ahead with its launch plans. The track of the storm "has changed dramatically over the last few days," Tom Whitmeyer, NASA's deputy associate administrator, told reporters Friday. Agency leaders hoped it would change some more. Rolling the rocket back to the assembly building is a difficult, time-consuming endeavor that can create wear and tear on the rocket, even as it creeps along at a snail's pace.

But by Monday morning, Hurricane Ian continued to strengthen and remained headed on a course toward Florida. So NASA said it would start rolling the rocket back at 11 p.m. Monday to keep it safe before the storm arrives.

There will be other opportunities for launch. The SLS can go about every two weeks for a variety of reasons that NASA says accounts for "the complex orbital mechanics involved in launching on a precise trajectory toward the moon while the Earth is rotating on its axis and the moon is orbiting Earth each month in its lunar cycle."

One of the main issues is sunlight. The Orion spacecraft cannot be in darkness for more than 90 minutes at a time. Its solar arrays need to stay illuminated so they can provide power to the spacecraft and ensure it maintains the correct temperature.

The next launch opportunity begins Oct. 17 and runs through the end of the month. The next one after that would come in mid-to-late November. NASA has not yet chosen a new launch date.