Timing of NASA's moon launch may depend on emergency detonation system 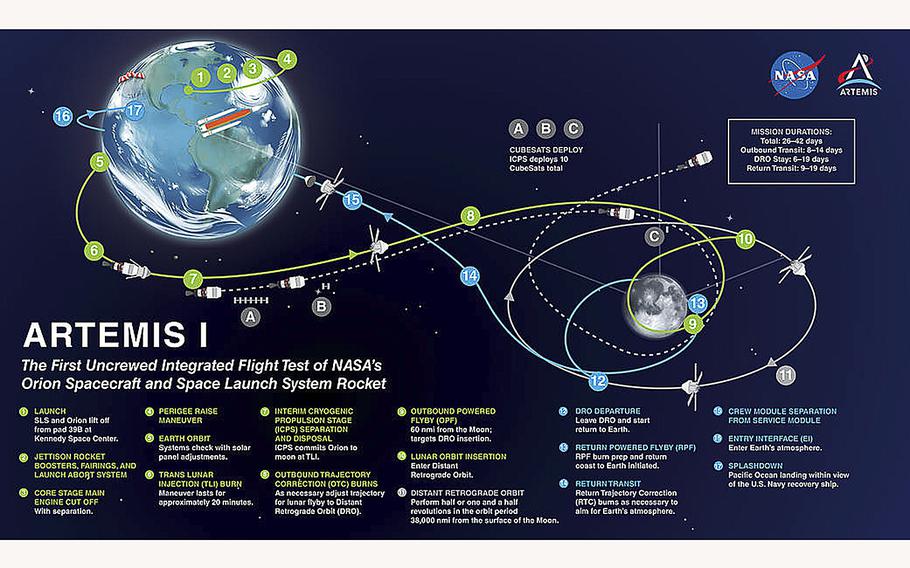 Like all big rockets, NASA's Space Launch System is outfitted with powerful engines and thousands of gallons of highly combustible propellants capable of lifting a booster the size of a tall building off the Earth and traveling many times the speed of sound out of the atmosphere.

It also carries a bomb.

Formally known as the Flight Termination System, it is a detonation system designed to destroy the rocket in case it starts to veer wildly off course and threaten people on the ground. In the dangerous world of rocketry, it's a vital and ubiquitous safety component, operated by the military. But it's also creating a bit of a headache for NASA as it struggles to launch the SLS rocket for the first time.

The Space Force requires the batteries on the SLS's termination system to be recharged every so often to ensure they are in good working order. The problem for NASA is that the recharge can be done only in the rocket's assembly building, meaning they would need to perform the arduous work of rolling the 322-foot-tall rocket off the pad, where it is now, back to the building, four miles away - a journey that can take about eight hours each way.

That would further delay a launch that last week was waived off twice because of other technical problems, including a massive leak of the liquid hydrogen the rocket uses for fuel.

NASA already got the Space Force to extend the flight-termination battery requirement from 20 to 25 days so that it could attempt a launch in the latter part of its last launch period, which ended Tuesday.

Now, NASA is in discussions with the Space Force for a waiver that would allow the time frame to be extended yet again. But this time the waiver would have to extend the initial 20-day requirement to over some 40 days, since the earliest NASA could attempt a launch is a two-week period that begins Sept. 19.

The launch would be the first in NASA's Artemis campaign to eventually return astronauts to the lunar surface. This first mission would send the Orion spacecraft, without any astronauts on board, in orbit around the moon. It would be followed by a crewed flight that would again orbit, but not land on the moon, perhaps in 2024, with a landing to come in 2025 or 2026.

After years of delays and setbacks, NASA officials are eager to get the first mission off the ground. But they've struggled with a series of issues. The first attempt was scrubbed because of a bad engine sensor reading. Then, on Saturday, they could not control a large hydrogen leak and said there was also a sudden increase in the pressure of the fuel line that caught officials by surprise.

Now, NASA is struggling with the constraints of the termination system, and it is not clear whether the Space Force's Space Launch Delta 45, which oversees what's known as the Eastern Range, would grant the extension.

"The first thing is to protect the public and the Eastern Range takes that mandate to protect the public very seriously," said Wayne Hale, a former NASA space shuttle flight director who now chairs a NASA advisory committee. Rockets, he said in an interview, are "effectively a bomb, it's a huge bomb" and the wing goes to great lengths to ensure the termination systems are working before they allow launches to occur.

"They are consummate professionals," said Wayne Monteith, the former commander of the 45th Space Wing. "If something goes wrong, they are they team you want on console."

NASA said Tuesday evening that engineers would replace the seal that malfunctioned during the hydrogen leak on the launchpad, instead of rolling it back to the assembly building. That would allow it to test the seal by running the liquid hydrogen, which is kept at minus 423 degrees Fahrenheit, through it.

"Performing that work at the pad also allows teams to gather as much data as possible to understand the cause of the issue," NASA said in a statement.

There is a downside, though - the longer the rocket is outside, the longer it is exposed to the fickle weather that is common along the Florida Coast this time of year.

"We are mindful that we're out there in the elements when we're at the pad," Mike Sarafin, the Artemis mission manager, told reporters after the scrub on Saturday.

While it does the repair work, NASA said it would "set up an enclosure around the work area to protect the hardware from the weather and other environmental conditions, but enables engineers to test the repair under cryogenic, or supercold, conditions."

It noted that in order "to meet the current requirement" the Space Force has for the flight termination batteries, it "would need to roll the rocket and spacecraft back" to the assembly building to reset the batteries.

If that is the case, NASA may not be able to attempt another launch until the next opportunity, a roughly two-week period that begins Oct. 4. The SLS's ability to launch is determined by the position of the Earth and moon, since the Orion spacecraft cannot be in darkness for more than 90 minutes at a time. Its solar arrays need to stay illuminated so that they can provide power to the spacecraft and ensure it maintains the correct temperature.