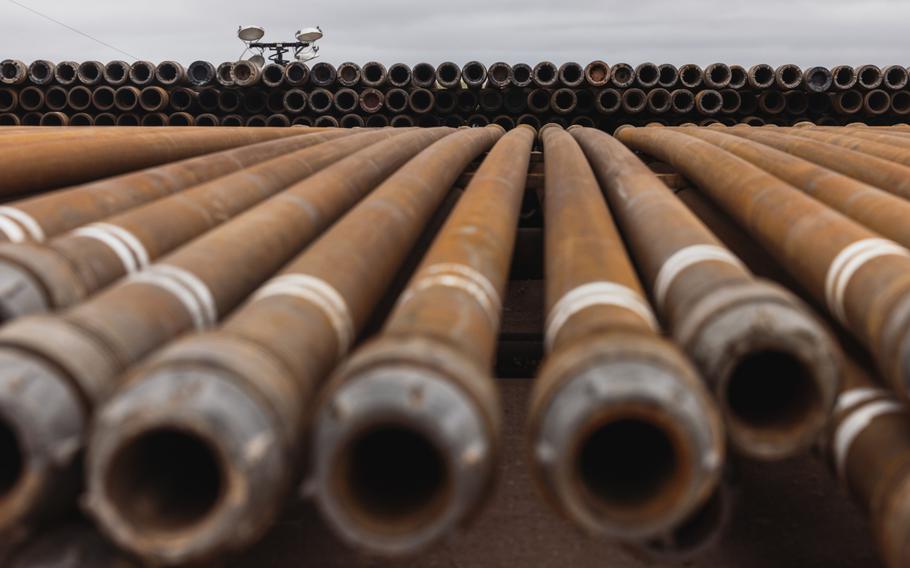 Stacks of steel pipes used for drilling oil wells at a drilling site on the land that the University of Texas System overseas in Andrews, Texas, in June 2022. (Jordan Vonderhaar/Bloomberg)

The Biden administration is moving toward a release of at least another 10 million to 15 million barrels of oil from the nation’s emergency stockpile in a bid to balance markets and keep gasoline prices from climbing further, according to people familiar with the matter.

The move would effectively represent the tail end of a program announced in the spring to release a total of 180 million barrels of crude from the Strategic Petroleum Reserve. About 165 million barrels has been delivered or put under contract since the program was put into effect.

The Biden administration also is set this week to provide details on plans to replenish the emergency stockpile. The Energy Department announced in May it was planning a new method of buybacks to allow for a “competitive, fixed-price bid process,” with prices potentially locked in well before crude is delivered.

The announcement will be part of response to the ongoing effects of Putin’s war, a senior administration official said. It will also address anxieties about stubbornly high gasoline prices ahead of midterm elections next month and historically constrained supplies. Heading into winter, the U.S. has the lowest seasonal inventories of diesel, according to data first compiled in 1982.

Separately, the administration is still weighing limits on exports of fuel to keep more gasoline and diesel inside the U.S., according to two of the people, who weren’t authorized to speak publicly about internal deliberations. Although no timeline has been set for a decision on that potentially more dramatic step, it wouldn’t happen before November’s midterm elections, one of the people said.

The export control idea, which would be temporary, has sparked division within the administration, as top Biden energy adviser Amos Hochstein argues in favor of new export controls even as Deputy Energy Secretary David Turk has expressed concerns, said people familiar with the matter. Other White House officials, including national security adviser Jake Sullivan and Chief of Staff Ron Klain, have yet to make a recommendation.

Energy Department and White House officials have been quietly meeting this week with oil companies, including ExxonMobil and ConocoPhillips, to notify them of what to expect while continuing to encourage additional production of oil and refined fuels.

Oil industry representatives and third-party energy analysts have cautioned that limiting fuel exports could lead to higher prices in parts of the U.S., particularly in the import-reliant Northeast.

Spokespeople for the White House didn’t immediately comment. The Energy Department referred to a previous comment from earlier this month that asserted the administration was going to look at all tools available to protect Americans and uphold commitments to allies.

Republicans have made rising gasoline prices and inflation the centerpiece of their campaign to take control of Congress in the elections. The White House has been seeking to ease rising costs at the pump and bolster low domestic stockpiles of fuel while also responding to the OPEC Plus coalition’s decision earlier this month to slash production.

Gasoline prices, one of the most visible signs of inflation, are a political headache for President Biden, who in recent weeks has repeatedly warned oil companies against raising costs. Average U.S. gasoline prices were slightly lower at $3.87 a gallon on Monday, according to data from auto club AAA.

“The price of gas is still too high and we need to keep working to bring it down,” Biden said at an event in Los Angeles last week.

White House economic adviser Jared Bernstein said Sunday that Biden hadn’t yet made a decision on an SPR release. The reserve is still more than half full, he told Fox News Sunday.

The White House had indicated that further SPR drawdowns were a possibility shortly after the OPEC Plus announcement.