The Saudi-US relationship was always a marriage of convenience 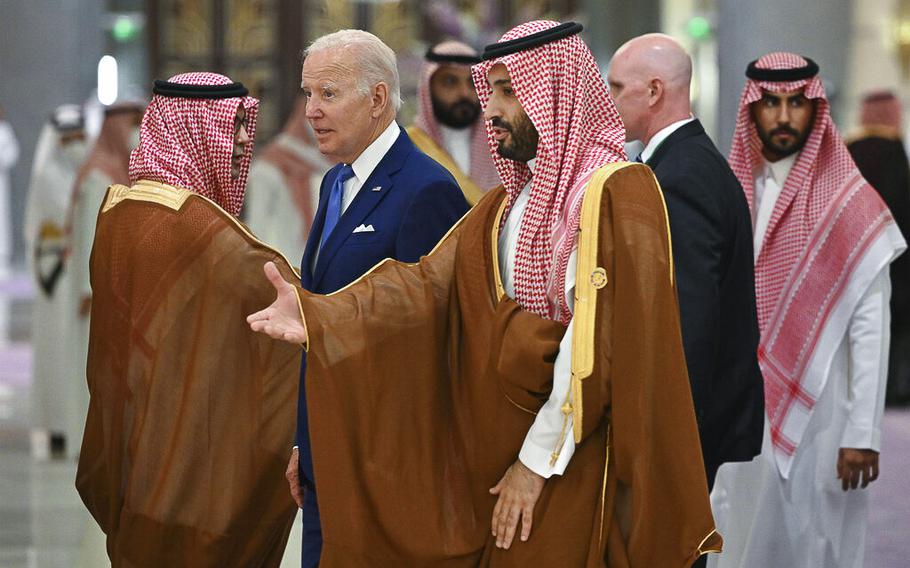 Not even a fist bump could save the Saudi-U. S. relationship. When President Biden visited the Saudi city of Jiddah three months ago, he was greeted with a fratboy-like familiarity by the 37-year-old Crown Prince Mohammed bin Salman.

The meeting sparked a wave of criticism for the U.S. leader, who was accused of cozying up to the de facto head of a country he had once pledged to make a "pariah" after to the murder of Saudi dissident and Washington Post contributor Jamal Khashoggi.

But any hopes for a renewed bromance between the United States and Saudi Arabia were shattered last week when the Saudi-led oil cartel OPEC Plus announced it would cut its oil output by 2 million barrels a day - a move that could boost prices in the United States over the winter, a major political problem for Biden only a month before highly competitive midterm elections.

That OPEC Plus includes Russia, at odds with the United States and its allies over its invasion of Ukraine, was just another kick in the teeth.

The Biden administration quickly fired back. It announced it would be reviewing the U.S. relationship with Saudi Arabia, warning of "consequences" for the action. In return, Riyadh offered an unusually detailed and combative response. On the official Saudi Press Agency, an unnamed official rejected any suggestion that it was taking sides against the United States and that the decision to cut production was based only on "economic considerations."

"The Kingdom affirms that it view[s] its relationship with the United States of America as a strategic one that serves the common interests of both countries. The Kingdom also stresses the importance of building on the solid pillars upon which the Saudi-US relationship had stood over the past eight decades," the statement said. Among these pillars, it frostily concluded, was "mutual respect."

"Do they want to stay on the side of Russia?" Kirby asked of Saudi Arabia.

The informal partnership was cemented with a dinner date more than 70 years ago on a U.S. Navy boat on the Suez Canal. President Franklin D. Roosevelt was returning from the Yalta Conference in 1945 when he stopped in Egypt to meet with some of the most important leaders from the Middle East and Africa, including King Farouk of Egypt and Emperor Haile Selassie of Ethiopia.

There was also a lesser-known name on the list: The first Saudi king, Abdul Aziz ibn Saud.

Ibn Saud was a charismatic military leader who beat his rivals to become the founder of modern Saudi Arabia. He was not a worldly man. The meeting on the Suez Canal was reported to be the first time he had left his kingdom. He brought eight sheep with him to the USS Quincy, where he met Roosevelt, to be slaughtered for dinner.

He and Roosevelt hit it off, bonding over their shared physical ailments. They came up with an informal deal that would see the United States offer diplomatic support and military training for the then-fledgling kingdom, in return for political support in the region - and, of course, access to Saudi Arabia's oil reserves.

Saudi Arabia's oil reserves were enormous, now believed to be second only to Venezuela, and of a higher quality than the sticky, crude stuff found there. But while Saudi Arabia had been struck years before World War II began, the kingdom was too poor to do much with it. Saudi Arabia's traditional Western ally, Britain, was now preoccupied with its own recovery from the war.

"Only the United States had the resources to help the Saudi economy cope until oil production grew sufficiently to make the Kingdom solvent," Bruce Riedel later put it in his book "Kings and Presidents: Saudi Arabia and the United States since FDR."

In the years since 1945, this meeting has been mythologized as the beginning of a relationship of mutual benefit. Photographs of Roosevelt and Ibn Saud hang up in Saudi diplomatic outposts around the world. But in truth, there was no immediate seismic shift after the meeting.

Roosevelt died only two months after he met Ibn Saud. He was replaced by Harry S. Truman, who took a more cautious view of the kingdom. Saudi oil production grew, but it didn't make an immediate impact: Later estimates suggested that in 1950, after years of oil-backed growth, Saudi Arabia's revenue was less than that of the average American city.

When Saudi Arabia's oil refineries did eventually boom, it wasn't long before some Americans began to question what, exactly, the broader point of the relationship was. In 1972 and 1973, a Saudi-led oil embargo against countries supporting Israel in the Yom Kippur War targeted the United States specifically. And as Saudi Arabia grew richer, it grew more powerful.

"We are reaching the point where we are more dependent upon them than they are on us," one American diplomat told The Washington Post in 1977 amid yet another round of tensions. "No matter what good friends they are, that is an unhealthy position for us."

Outside of oil, shared interests were fleeting. When Roosevelt and Ibn Saud met in 1945, much of the discussion centered around the prospect of a Jewish state in Israel, with the Saudi leader very much opposed. But differences over the Palestinian cause would later be at the root of many disagreements.

Later, both Washington and Riyadh were loose allies in the Cold War and after the Iranian revolution in 1979, the two united in opposing Tehran. Saudi Arabia became a major purchaser of U.S. military goods by the 1990s, buttressing the American arms industry with the same money it extracted through oil sales.

But the Cold War ended. Saudi Arabia now finds itself aligned with Moscow for economic reasons in OPEC Plus. Meanwhile, the Biden administration is seeking to revive the nuclear agreement between Iran and other world powers and it has little interest in painting Tehran as its enemy. And since the attacks on America on Sept. 11, 2001, there has been simmering anger over Saudi Arabia's tolerance of religious extremism.

Arms sales have lost their luster, given the kingdom's use of American weapons in its disastrous war in Yemen and the gruesome murder of Khashoggi, a U.S. resident who was well-known and well-liked in Washington.

Whatever bond may have existed in the past between leaders like Roosevelt and Ibn Saud does not exist between Biden and Mohammed bin Salman. The best an American could say of his signature policy, the insane planned city of Neom, is that it serves as financial support for U.S. urban planners and technologists.

Now, by pushing a production cut at OPEC Plus, Saudi Arabia isn't just indirectly supporting Russia or pushing the world closer toward a recession - it's shaking the very slippery, oil-based foundations of its relationship with the United States. And if Biden listens to some Democratic lawmakers, this marriage of convenience could finally be heading for a divorce.