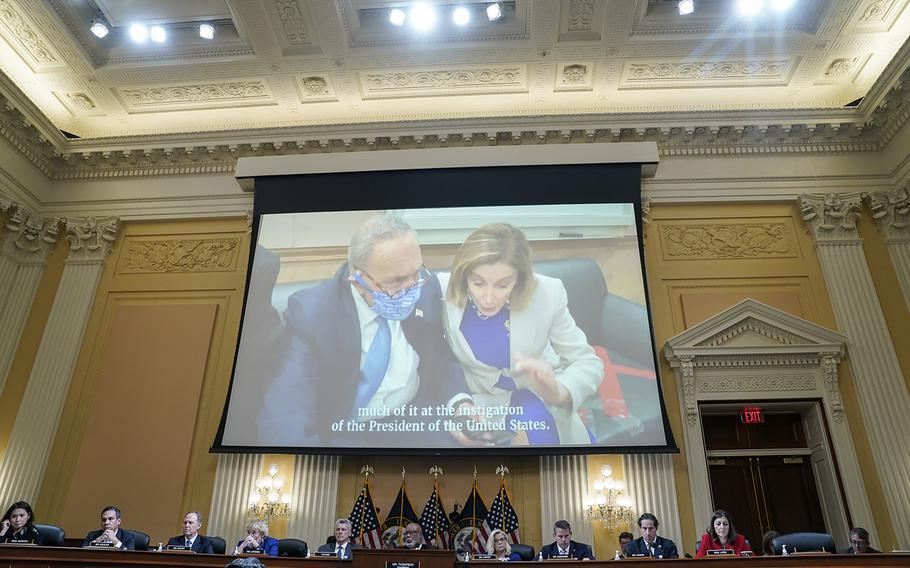 Senate Majority Leader Charles E. Schumer, D-N.Y., and House Speaker Nancy Pelosi, D-Calif., are seen on a video screen during the House select committee hearing making calls from a secure location while the Capitol was being attacked on Jan. 6, 2021. (Jabin Botsford/Washington Post)

Never-before-seen video of House Speaker Nancy Pelosi (D-Calif.) and other congressional leaders on Jan. 6, 2021 offers strikingly vivid evidence undermining former president Donald Trump's claim that the failure to adequately protect the Capitol from rioters lay not with him but with Pelosi.

In the video shown Thursday by the House committee investigating the attack, Pelosi is on the phone pleading with Trump administration officials for help to stop the violence and secure the Capitol as U.S. Capitol Police were overmatched by the hundreds of rioters storming the building - including some who demanded her head. Getting nowhere with the officials, she reaches out to Virginia's governor and says she will contact the Washington, D.C., mayor.

Throughout the video, Pelosi is intent on resuming the congressional process of counting the electoral college votes for Joe Biden's win while showing the nation that the government was still functioning despite the siege. The video was recorded by a documentary crew embedded with Pelosi and led by her daughter Alexandra.

Trump often has suggested that Pelosi failed to do her job, that the breach of the Capitol was her fault and the absence of enough security to turn back the mob of his supporters was her responsibility - not that of the commander in chief. He has falsely claimed that Pelosi rejected his order for 10,000 National Guard troops - something that never happened. The former president, in a statement Friday responding to the committee, wrote, "I fully authorized" deployment of National Guard troops, but, he added falsely, the request was refused by officials who answer to Pelosi.

"Nancy Pelosi and [D.C. Mayor] Muriel Bowser didn't do their job, they didn't like the look of soldiers, and sadly your Committee refuses to say anything about it, because if they did, it would be clear that I did everything correctly, and that is not what the Committee wants to see," Trump wrote.

Trump's claims were echoed by Republican lawmakers, including some who - according to the newly released video - were literally in the room when Pelosi and others were calling in reinforcements. On the evening of Jan. 5, Trump made an offhand comment to his acting secretary of defense about needing thousands of troops in Washington the following day. The secretary told Trump he had to formally make that request, which Trump never did.

For Pelosi, the video was just the latest eye-catching display of her authority in the face of Trump.

Trump, needless to say, has sought to blame many of his problems on Pelosi.

His statement Friday came one day after the House committee voted to subpoena him for records and testimony. His statement on Friday in response was silent on whether he will comply or defy the panel.

Here is a breakdown of the video

Pelosi, being escorted through a corridor to safety, says into her cellphone, "We have got to get - finish the proceedings or else they will have a complete victory." Later, in a secure location with staffers, Pelosi said a key goal is to "maintain the sense that people have that there's some security or some confidence that government can function and that we can elect a president of the United States."

Pelosi and others speak with the acting secretary of defense

Schumer tells Miller: "We have some senators who are still in their hideaways. They need massive personnel now. Can you get the Maryland National Guard to come too?" Pelosi then tells Miller she will call the mayor "and see what other outreach she has."

Pelosi then says to Northam, "I still think you probably need the okay of the federal government to come in to another jurisdiction."

As Pelosi ends her call with Northam and hands the phone to an aide, Schumer says aloud, "Virginia Guard has been called in."

Pelosi then says Northam "sent 200 state police and a unit of the National Guard."

Pelosi, speaking into a phone Schumer is holding, tells acting attorney general Jeffrey Rosen that the rioters are "breaking windows and going in, obviously ransacking our offices and all the rest of that." She tells him, "That's nothing. The concern we have about personal harm...personal safety, just transcends everything."

Schumer, clearly angry, chimes in and tells Rosen: "Why don't you get the president to tell them to leave the Capitol, Mr. Attorney General, in your law enforcement responsibility."

Trump would eventually release a video statement that day asking rioters to leave, but restating the lie that he won the election.

Schumer asks the Defense Department: "How soon in the future can you have the place evacuated? You know, cleaned out?" When the defense official balks at giving an estimate without knowledge of what officials are seeing on the ground, Pelosi presses for immediate action.

"Just pretend for a moment that we're in the Pentagon or the White House or some other entity that was under siege," Pelosi says. "You can logistically get people there as you make the plan."

Pelosi speaks with Vice President Mike Pence. She tells him that McConnell is in agreement about wanting to minimize the objections to certifying Joe Biden's victory.

"We're trying to figure out how we can get this job done today," she told Pence. "We talked to Mitch about it earlier." But Pelosi says it is not clear how soon lawmakers can reconvene. "The overriding wish is to do it at the Capitol. What we are being told very directly is it is going to take days for the Capitol to be okay."

Just before 6 p.m. Pence calls Pelosi and relays news he received from the Capitol Police: The House and Senate will be able to reconvene in about an hour.

Pelosi's most explosive comments though can be seen in video the documentary crew provided not to the committee, but rather, to CNN.

In the video, before the rioters reach the Capitol, Pelosi is seen in her office. As a staffer tells her that despite Trump publicly claiming he will join the march to the building, Secret Service "told him they don't have the resources to protect him here. So at the moment he is not coming, but that could change."

Pelosi replies, "If he comes I'm going to punch him out." As an aide says she would "hate to see that," Pelosi continues: "I've been waiting for this. For trespassing on the Capitol grounds."