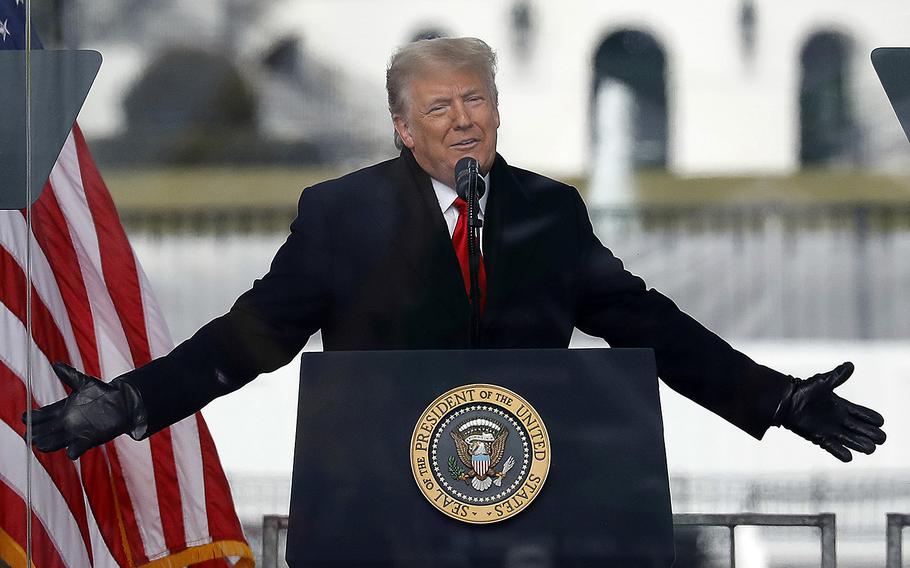 U.S. President Donald Trump speaks to his supporters at the Save America Rally on the Ellipse on Jan. 6, 2021 near the White House in Washington, D.C. (Yuri Gripas/Abaca Press/TNS)

(Tribune News Service) — Former President Donald Trump slammed the House Jan. 6 committee as a "witch hunt" on Friday but did not say whether he would comply with a subpoena for his testimony.

A day after the committee ordered Trump to testify under oath, Trump issued a rambling statement denouncing the panel as an unfair Democratic plot to damage him politically.

On his social media outlet, the twice-impeached ex-president blasted members for not asking him earlier and called the panel "a total BUST."

"The Unselect Committee has perpetuated a Show Trial the likes of which this Country has never seen before," Trump said in the four-page letter addressed to Rep. Bennie Thompson, D-Miss., the committee's chairman. "It is a Witch Hunt of the highest level."

Trump accused the committee of ignoring his bogus claims of vote fraud and his contention that someone other than he should have acted to defend the Capitol against the violent mob of his supporters.

"You have not gone after the people that created the Fraud, but rather great American Patriots who questioned it," Trump wrote. "These people have had their lives ruined as your Committee sits back and basks in the glow."

In the committee's 10th public session on Thursday, just weeks before the congressional midterm elections, the panel summed up Trump's "staggering betrayal" of his oath of office, as Thompson put it, describing the then-president's unprecedented attempt to stop Congress from certifying Democrat Joe Biden's victory.

While the effort to subpoena Trump may languish, more a nod to history than an effective summons, the committee has made clear it is considering whether to send its findings in a criminal referral to the Justice Department.

Under committee rules, the Jan. 6 panel is to produce a report of its findings, likely in December. The committee will dissolve 30 days after publication of that report, and with the new Congress in January.